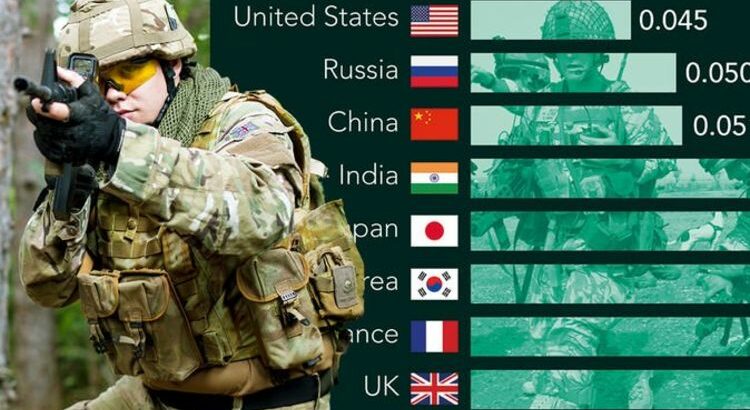 Typically, one of the main factors which dictates the level of influence a country can wield on the international stage is the strength of its military. In recent history, the US has finished top of this list, however, according to the latest data, a number of nations are growing ever closer to hunting it down. So, which countries have been deemed to hold the greatest military power?

Global Firepower is a statistics-based website which tracks defence-related information of 140 nations around the world.

On an annual basis, the company publishes what it calls its “PowerIndex” to determine the countries with the most ‘perfect’ or ‘powerful’ militaries across the globe.

A perfect score is 0.0000, although realistically this is unattainable for a country to achieve due to the nature of the PowerIndex formula.

Each nation’s potential war-making capability across land, sea, and air fought by conventional means – does not include nuclear capabilities – is used to determine its ranking.

These are represented by more than 50 individual factors used in formulating the final positions.

For 2022, the US was determined to be the country which has the most powerful military in the world, with a score of 0.045.

Completing the top three were Russia and China, who finished in second (0.050) and third (0.051) place respectively.

Where did the UK finish?

The UK came in at eighth place according to the PowerIndex, generating a score of 0.138.

After France – who scored one place above – the UK was deemed to have the third strongest military in Europe.

The remaining nations that finished ahead of it were South Korea, Japan and India.

DON’T MISS:
Greeks FURY as unvaccinated over 60s fined monthly from today [INSIGHT]
Russia Warning: Canada preparing for Putin’s invasion of Ukraine [ANALYSIS]
‘It may not be a lot of money for Gary Lineker’ – Michael Grade [OPINION]

How have Russia and China overtaken the UK?

Russia’s current President Vladimir Putin has overseen a significant reform of the country’s military since assuming office in 2012.

This included proliferating its nuclear arsenal and gradually converting its armed forces into a more professional regime.

Indeed, this strength has been evidenced on a number of occasions in recent years.

Notably, the country annexed the Republic of Crimea in southern Ukraine, in 2014, and over the last few months has sparked concerns in the West that it could launch a full-scale invasion of its ex-Soviet neighbour.

On the other hand, China is believed to currently be the second-biggest spender – only behind the US – of any country in the world in relation to its armed forces.

In March last year, the country announced a 6.8 percent increase to its defence budget, which amounted to around $209.16 billion.

However, Western estimates of China’s financial support for its armed forces are often significantly higher due to a perceived lack of clarity on its spending.