Or, to put it another way, the average Melburnian could have done the commute to and from work for four extra days on a $50 fuel bill in 2019-20 than they can today.

In Victoria, people who commute to work in a car drove, on average, a total of 6900 kilometres each over the 12 months to June 30, 2020, according to the latest Australian Bureau of Statistics figures. 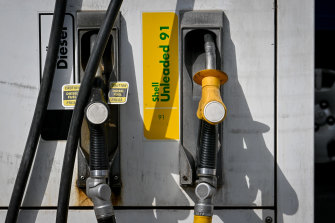 The average Melburnian is paying $676 more per year to drive to work than they were two years ago.Credit:Eddie Jim

At Melbourne’s average petrol price in mid-July of 222.6 cents per litre, that same commute would now cost $1597, or 65 per cent more than it did two years ago.

And if prices were to rise by the average increase over the past two years, in another 12 months’ time they would reach 272 cents per litre and that commute would cost $1952, or more than double the annual cost in 2019-20.

This calculation doesn’t take the halving of the fuel excise in March 2022 into account. The tax, which usually amounts to an additional 44.2 cents per litre of fuel, was halved to 22.1 cents per litre on March 30. However, Australians are expected to go back to paying the full excise on September 28, 2022, which will likely lead to a jump in fuel prices.

In terms of how far $50 will get you in Melbourne, the answer is about 140 fewer kilometres than it did two years ago.

That means about 8.5 fewer one-way trips to work or about four fewer days of doing the round-trip.

NRMA spokesman Peter Khoury said prices in Melbourne were expected to fall significantly from their current high and that people should “just top up, don’t fill up” until they dropped.

However, Khoury said predicting prices beyond the current cycle was impossible due to the variety of global factors affecting fuel costs, including inflationary pressures, Russia’s invasion of Ukraine and ongoing COVID-19 lockdowns in China.

“In all the years the NRMA has been monitoring fuel prices, we’ve never seen anything like this,” he said.

“Even during the global financial crisis oil prices were more stable than this.”

Khoury said the volatility was an unfortunate reality for families who “don’t have a choice” when it comes to filling up the car.