Events to mark the end of the Great War have taken place around the world, with President Emmanuel Macron leading tributes in France, where more than 80 leaders and heads of state gathered at the Arc de Triomphe for a solemn event at the tomb of the unknown soldier. 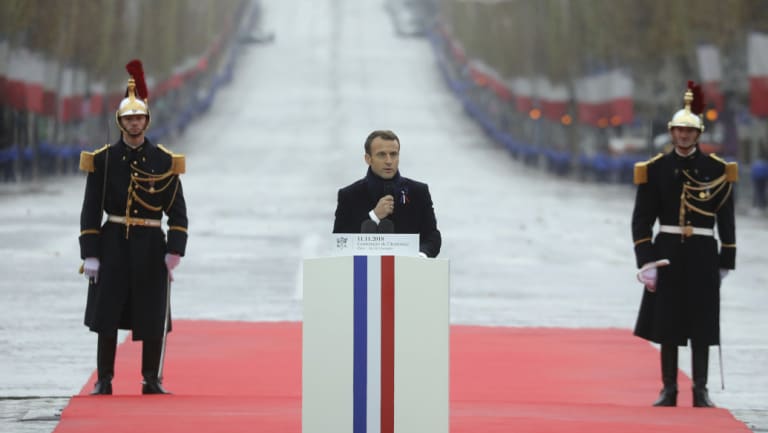 French President Emmanuel Macron delivers his Remembrance Day speech in the shadow of the Arc de Triomphe in Paris on Sunday.Credit:AP

Macron used the occasion to sound a powerful and sobering warning about the fragility of peace, and the dangers of nationalism and of nations putting themselves above the collective good.

In Paris to highlight the need for global unity, German Cancellor Angela Merkel met with the head of the United Nations, an organisation born from the ashes of World War II, and the President of Serbia. It was a Serb teenager, Gavrilo Princip, who assassinated the Austro-Hungarian crown prince in Sarajevo in 1914 to set off events which led to the outbreak of war. 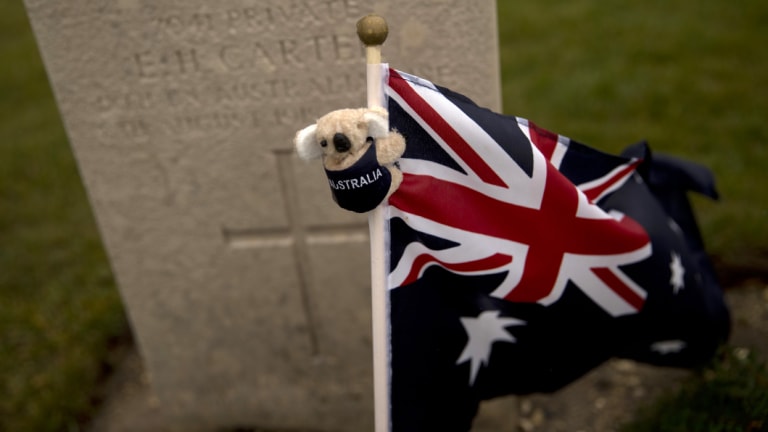 The Australian National Memorial at Villers-Bretonneux.Credit:AP

As on November 11, 1918 in France, church bells rang out and people gathered to sing La Marseillaise. At services in towns and villages across the country, the names etched on to cenotaphs and plaques of remembrance were read aloud.

The anniversary of the armistice was marked at the Australian war memorial in Villers-Bretonneux, in the Somme, where around 1500 people braved near-freezing conditions to pay their respects.

Earlier, at the official Remembrance Day service at the Australian War Memorial in Canberra, Prime Minister Scott Morrison paid tribute to the Anzacs, who he said had been "selflessness in the darkest of times."

In London, the royal family was joined by German President Frank-Walter Steinmeier to remember those killed and wounded in conflict, with millions falling silent for two minutes to mark the moment the guns fell silent. 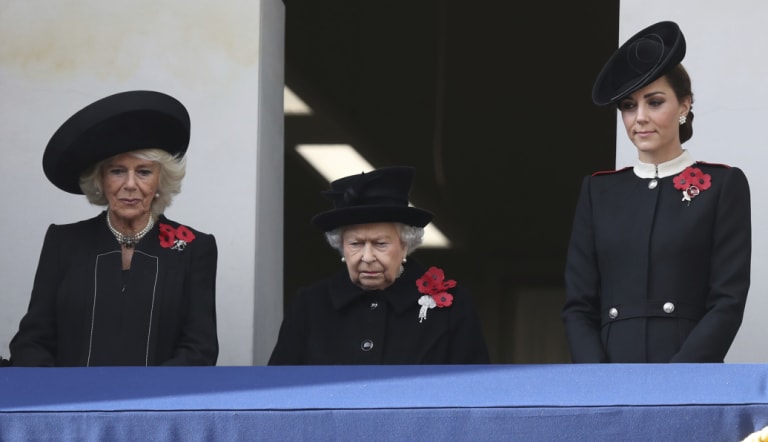 Prince Charles led the nation in the day of remembrance, laying a wreath on behalf of Queen Elizabeth, who watched the ceremony at the cenotaph from the balcony of Britain's foreign ministry.

For the first time, Steinmeier followed Prince Charles in laying a wreath in what the government said was an historic act of reconciliation. 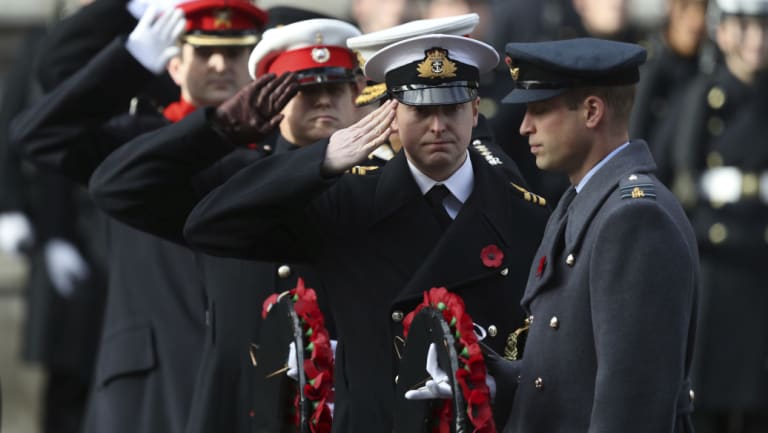 Prince William lays a wreath during the Remembrance Day service in Whitehall, London on Sunday.Credit:PA

Princes William and Harry, Prime Minister Theresa May and the leader of the opposition Labour Party Jeremy Corbyn, who was criticised by some on social media for wearing a raincoat, left wreaths. A wreath also was placed on behalf of the Queen's 97-year-old husband Prince Philip, who did not attend.

Afterwards, thousands of people marched in a "people's procession" through central London to honour fallen soldiers.

Portraits of soldiers who perished during WWI were drawn on beaches around the British coast and then washed away by the rising tide. 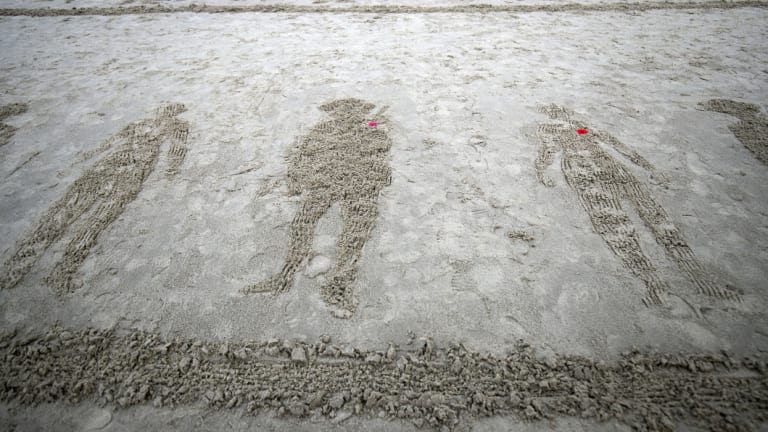 Drawings of soldiers on Sunny Sands beach in Folkestone, England during the Pages of the Sea commemorative event to mark the 100th anniversary of the end of WWI. The homage to fallen servicemen and women was the idea of filmmaker Danny Boyle and intended as an informal gesture of remembrance. Credit:PA

The homage – devised by British filmmaker Danny Boyle – were created by artists and volunteers using rakes and stencils early on Sunday morning.

At Twickenham on Saturday, the England and New Zealand rugby teams commemorated the centenary with players running on the field across a spot where soil taken from the grave of former England captain Ronnie Poulton had been placed.

Poulton was one of 27 England and 13 New Zealand players who were among the 131 international rugby players to die in the Great War. Both teams wore poppies on their shirts and a special Armistice Day edition of the 50 cent coin – minted by New Zealand's Reserve Bank – was used in the coin toss.

In Poland, President Andrzej Duda, Prime Minister Mateusz Morawecki and other leaders gathered in central Warsaw on Sunday to mark both the end of WWI and the rebirth of the nation on November 11, 1918. 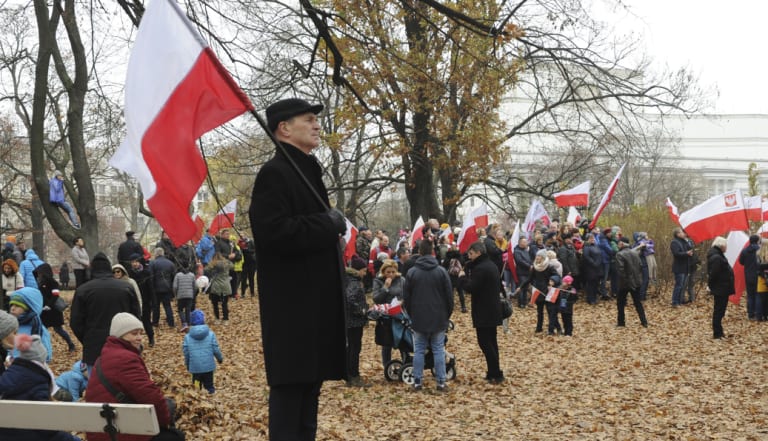 Poles gather in Warsaw on Sunday to watch the official ceremony marking both the end of WWI and Poland’s Independence Day. The day celebrates the nation regaining its sovereignty at the end of WWI after being wiped off the map for more than a century.Credit:AP

A crowd with Poland's white and red colours sang the national anthem at noon as a military band played. Duda gave a speech in which he appealed for national unity.

Ambassadors, army officers and others laid wreaths at a war memorial in Bucharest to remember nearly 700,000 Romanians who died of wounds, disease and famine during the war. 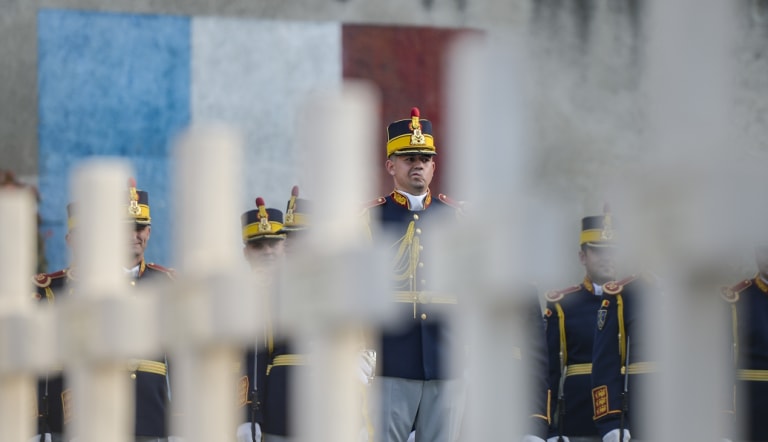 Romanian soldiers in Bucharest stand at attention next to graves of French soldiers killed in Romania during WWI.Credit:AP

Dozens of British, American and Romanians also attended a service led by British military priest Reverend Martin Sheldon of the Royal Air Force. The 45-minute ceremony began in mist and ended in bright sunshine at the Commonwealth War Cemetery about 30 kilometres north of Bucharest, where 90 pilots and sailors are buried.

Romania entered the war on the side of the Allies in 1916 but capitulated to the Central powers. It re-entered the war in 1918, and doubled its territory after the war ended.

In Rome, Pope Francis said that WWI should serve as a severe warning to reject a "culture of war."

He told faithful in St Peter's Square that the lessons from the Great War had been largely ignored. The pope, who often decries the arms industry, added: "Let's invest in peace, not war!"

Francis called the 1914-18 war "a severe admonition for everyone to reject the culture of war and search for every legitimate means to end the conflicts still bloodying several regions of the world."

Francis described war as "useless slaughter," a term used by Benedict XV, who was pope during World War I.