The one Christmas TV advert everyone ought to watch: How tragic then that it’s been banned, says SIMON BARNES, who’s seen first-hand how important its deeply touching story is

Christmas is all about television advertisements, especially those released by Britain’s biggest retailers — at least that’s what the ad men say.

These big-budget productions are designed to get the nation talking — and then spending.

John Lewis’s Monty the Penguin, Aldi’s Kevin the Carrot and the new adventures of Mog the Cat (depicted in service of Sainsbury’s) have all used cute characters to draw in shoppers.

This year though, there’s an early frontrunner in the race to be the season’s most talked about advert.

It’s the story of ‘Rangtan’, an impossibly cute baby orang-utan who’s taken up residence in a little girl’s bedroom, as told by the supermarket chain Iceland. It is a slickly worked cartoon originally put together by the campaigning organisation Greenpeace.

Rangtan has had to move out of her rainforest home because of the terrible destruction wrought by the production of palm oil, which is contained in everything from shampoo to pizza. Iceland is already playing its part by phasing it out of all its own-brand products. 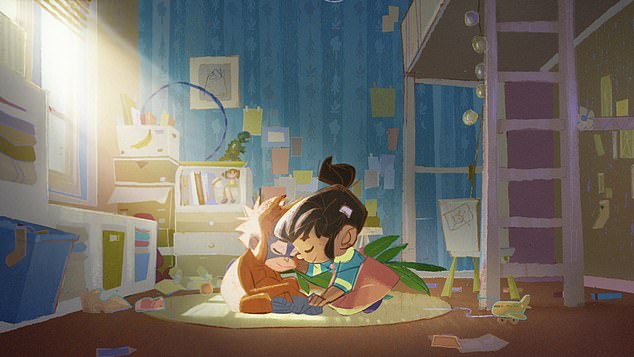 The advertisement ends with the little girl vowing to help her new friend by sharing news of her plight.

Narrated very sweetly by Emma Thompson, it efficiently pulls the heart-strings: rainforests are good things, so please let’s not allow the palm oil industry to destroy any more of them.

If ever there was an advert that needed to be watched by millions, it’s this one. But while you can catch it on YouTube, you won’t see it on television. It’s been banned by the advertising regulatory body Clearcast because they believe it was ‘directed towards a political end’. 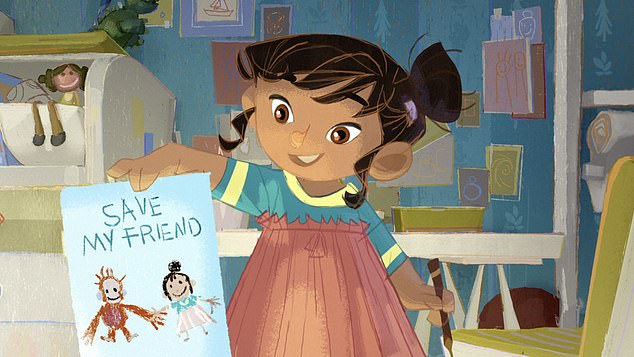 How crazy. The sports channels run adverts promoting gambling in a country with 400,000 problem gamblers and that is fine. But telling people to spend less on certain products to help the rainforests — apparently that’s political. Mustn’t do it.

You can argue against this decision from ecological conviction, from belief in free speech, and from plain common sense. I’d argue about it from personal experiece. I’ve been to Malaysian Borneo where many thousands of acres of rainforest have been cleared for palm oil plantations.

I have seen the heart-breaking transition from the mad tangled jungles to the regimental ranks of the oil palms.

I have been in the remaining forests and shared the place with the impossible-looking rhinoceros-billed hornbills (with so colossal a beak you wonder how it can possibly fly), the charming pygmy elephants, the bizarre proboscis monkeys and most striking of all, the red ape: our own close relative, the orang-utan. And then the grim grids of the plantations: if you aren’t profoundly moved by such a transition, you either have no heart or you have major investments in palm oil.

‘There’s a human in my forest and I don’t know what to do.

‘They destroy all our trees for your food and your shampoo.’

As I travelled by boat along the Kinabatangan River in Borneo towards the end of the day, I saw an orang-utan — no baby this one.

He was a big old male, making a hammock for the night, complete with roof, in case it rained. He did so in our full gaze, as we spoke in normal conversational tones to tell him that we weren’t trying to sneak up on him. And so, with a craftsman’s pleasure in his own skill, he completed his task and settled down for the night. 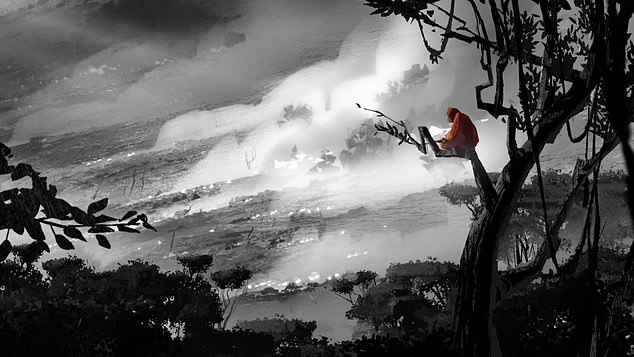 The International Union for the Conservation of Nature rates the Bornean orang-utan as Critically Endangered — the last category before a species is declared ‘extinct in the wild’ — and they project that in the 75 years to 2025, the number of Bornean orang-utans will have declined by 82 per cent.

Destruction of their rainforest habitat is a major cause of their decline. So it was with some surprise that when I was in Borneo, I was asked not to demonise the palm oil industry by people directly concerned with the conservation of rainforests. 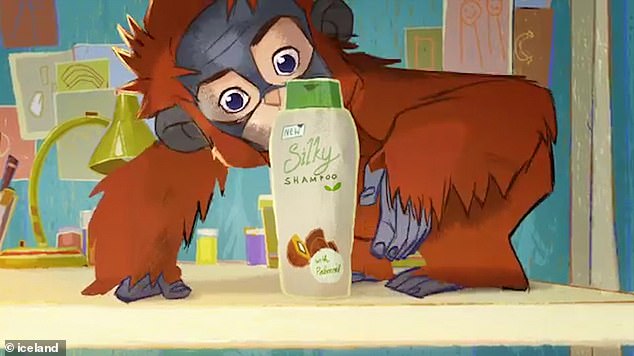 The star of the advert looks at a bottle of shampoo containing palm oil, the reason its home was destroyed

Palm oil plantations are important local employers and have huge political influence. You can’t afford to make enemies of them: waging war on the palm oil industry won’t work.

Richard Walker, managing director of Iceland Foods, said: ‘We have repeatedly said that we are not anti-palm oil, we are anti-deforestation.’ It is the crucial point here, even if it’s a difficult distinction to make clear within the constraints of a 90-second television advert.

John Burton is co-founder and CEO of World Land Trust, a wildlife conservation organisation that works extensively in Borneo, and which a few years ago raised £1 million to safeguard a piece of forest along the Kinabatangan.

He said: ‘We must try and manage the existing situation in an ethical way. I don’t want to see palm oil banned; but I believe it’s crucial that there is no further expansion of the industry.’ 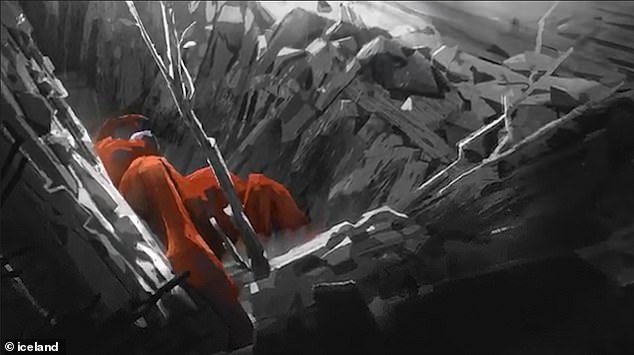 Clearcast, the watchdog for adverts on the UK’s main commercial channels, said it was concerned that the commercial ‘doesn’t comply with the political rules’

Rainforest is essential to the survival of all life on this planet, humans, orang-utans and all. The value of the ecosystem services these forests provide have been calculated at trillions of dollars every year. We need them for our own sakes.

They are also home to glorious and funky creatures that enrich our lives: flying snakes, bats the size of bumblebees and the slow loris, whose eye is bigger than its brain.

Iceland is trying to do something about all that: and they’ve been banned from telling us about it. The response of every thinking human should be to watch the advert online — and decide for themselves who is right.