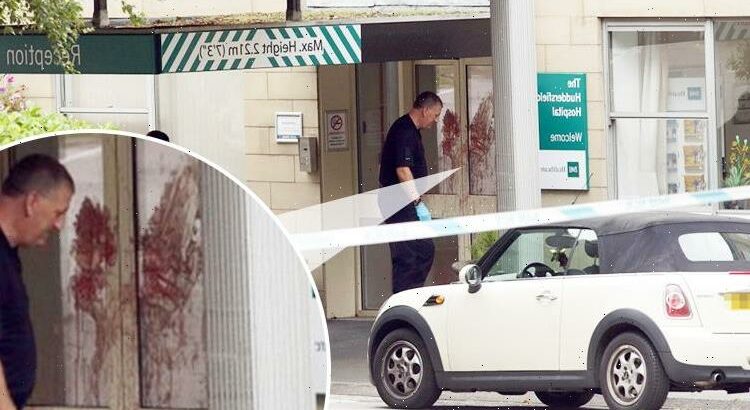 BLOOD covered the entrance of a hospital placed on lockdown by police after a man was slashed in a suspected targeted attack.

Huddersfield BMI Healthcare, in West Yorks., was dramatically shut down and patients told to stay away after the victim was set upon with a blade in the early hours of this morning. 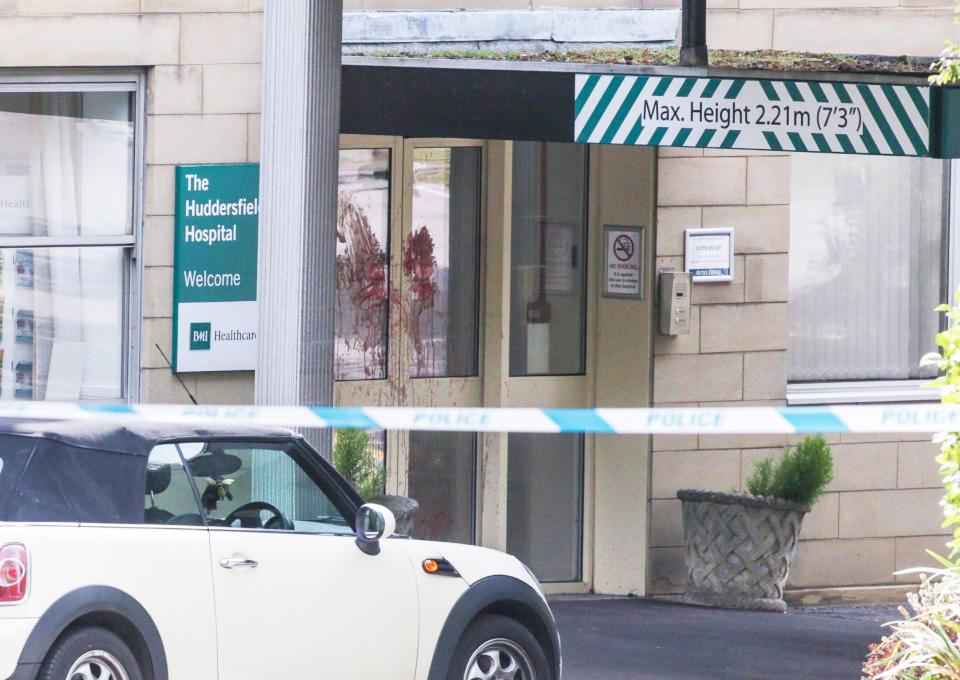 Armed police were called to the hospital after reports of gunshots and someone screaming "he's got a gun" just after midnight.

A man was rushed to hospital with multiple injuries and remains there being treated for serious wounds to his hand.

A patient said he was banging on the door as he was being slashed or stabbed. A police source told The Sun Online the man suffered lacerations from a blade in a suspected knife attack.

Blood can be seen on the main entrance doors, with one hospital staff member it looked like a scene from cult US zombie series, The Walking Dead. 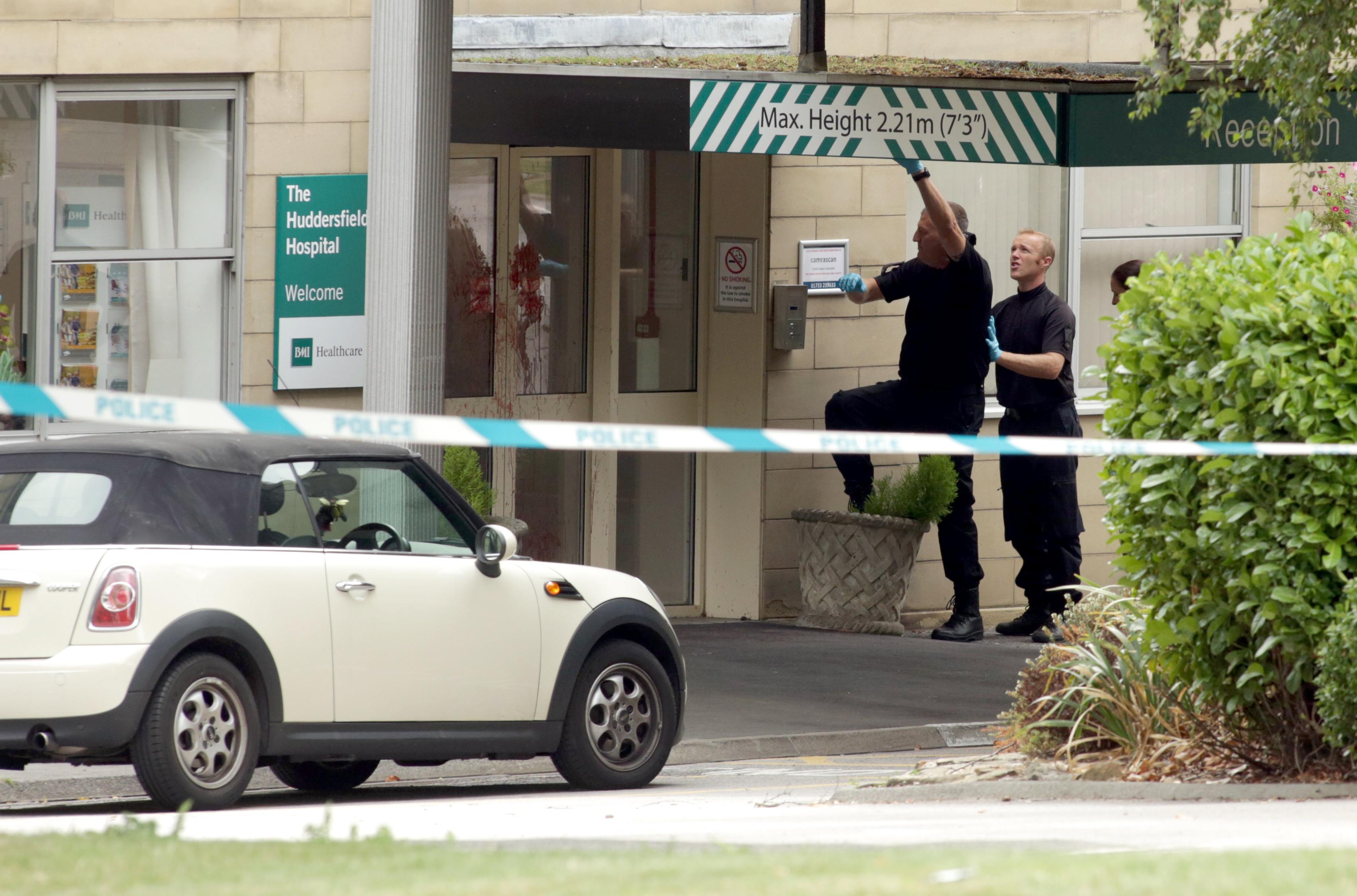 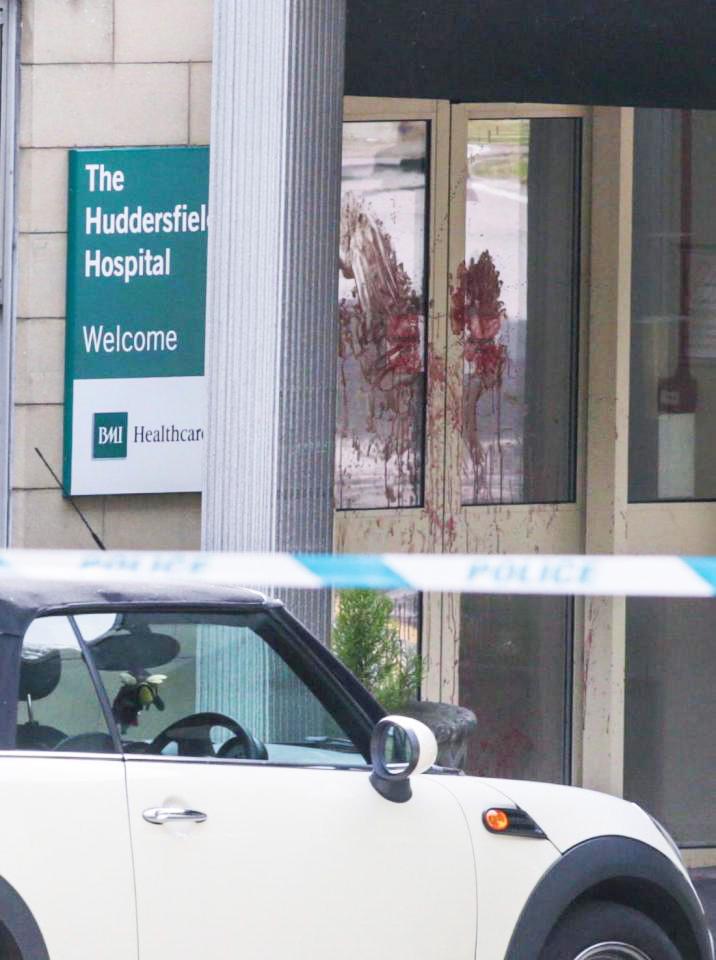 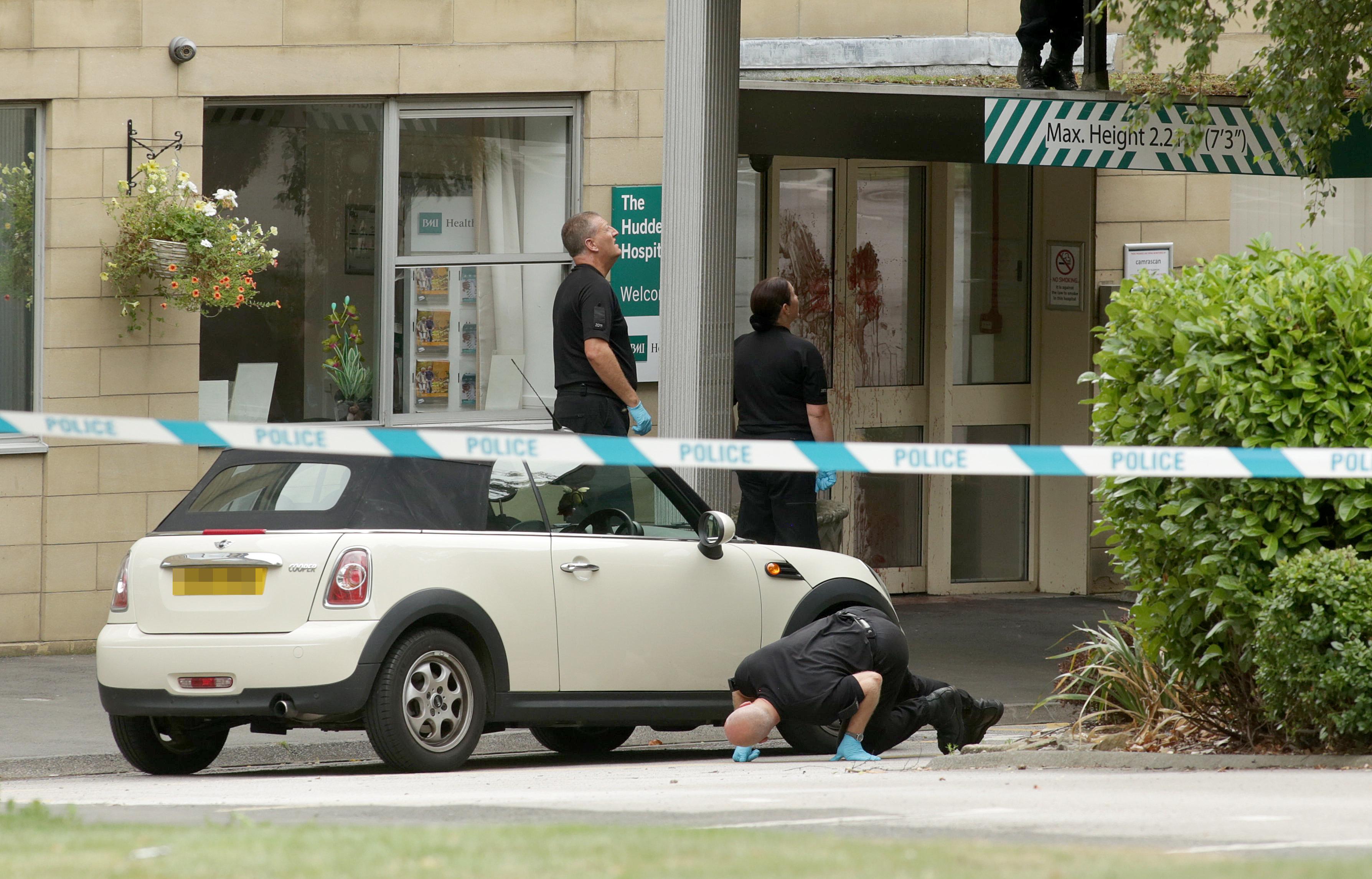 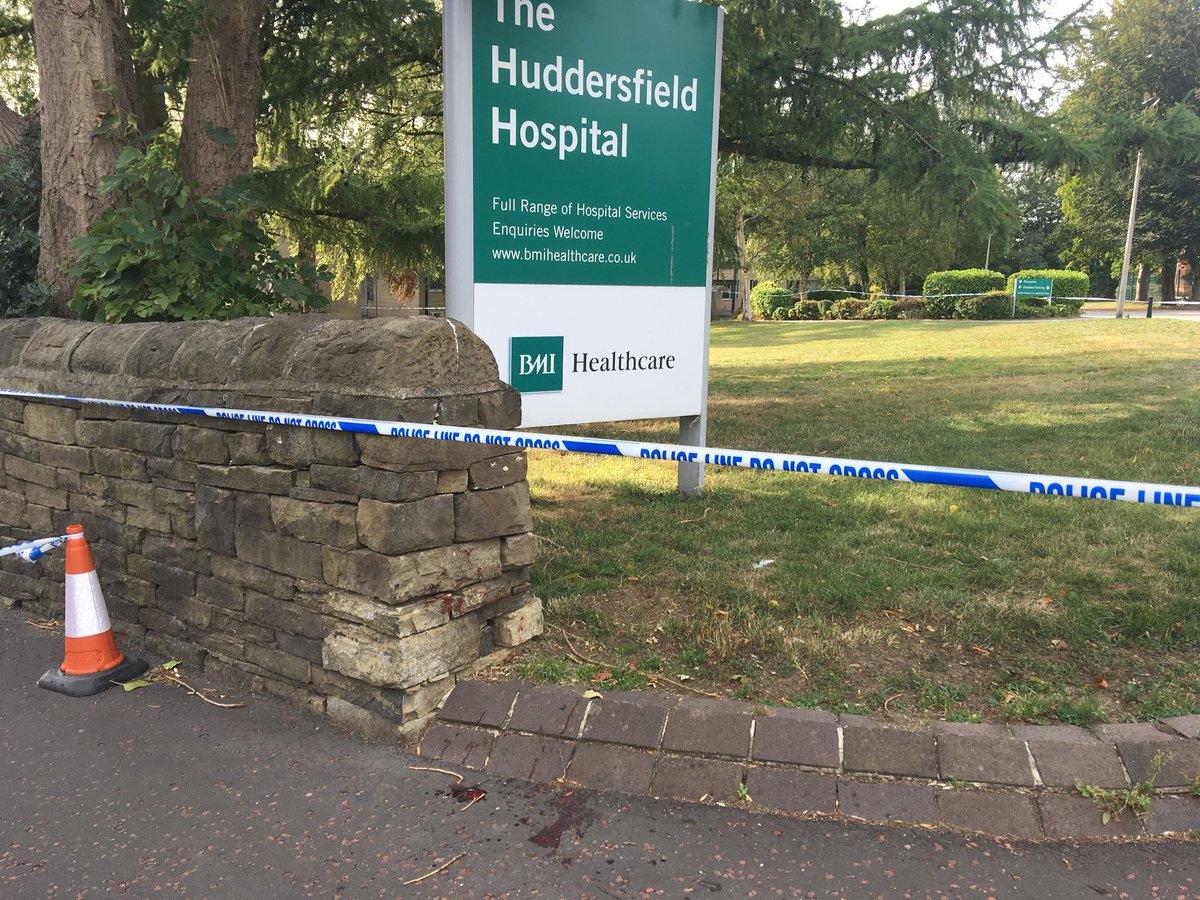 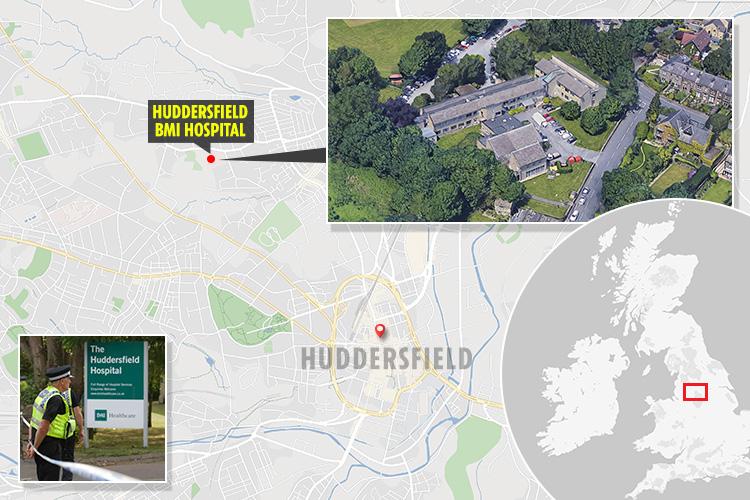 Police told The Sun Online they found no evidence of a gun being used but a large cordon remains in place at the private hospital in Birkby.

One member of staff said: "The attack is completely unrelated to the hospital and the poor bloke that was stabbed was not a patient. It might well be he was trying to get medical help at the time.

“He’s left the front door looking like something out of The Walking Dead, but I’m pleased he is not badly injured and is being treated in hospital now.

“The atmosphere is very relaxed inside today and we will be back up and running as normal tomorrow.”

A woman, who did not want to be named, told the Huddersfield Examiner: “[It] started at around 11.55 last night. Two cars crashed.

"One man got shot and [was] screaming ‘they have a gun and they want to kill me’. He was screaming for help. Awful." 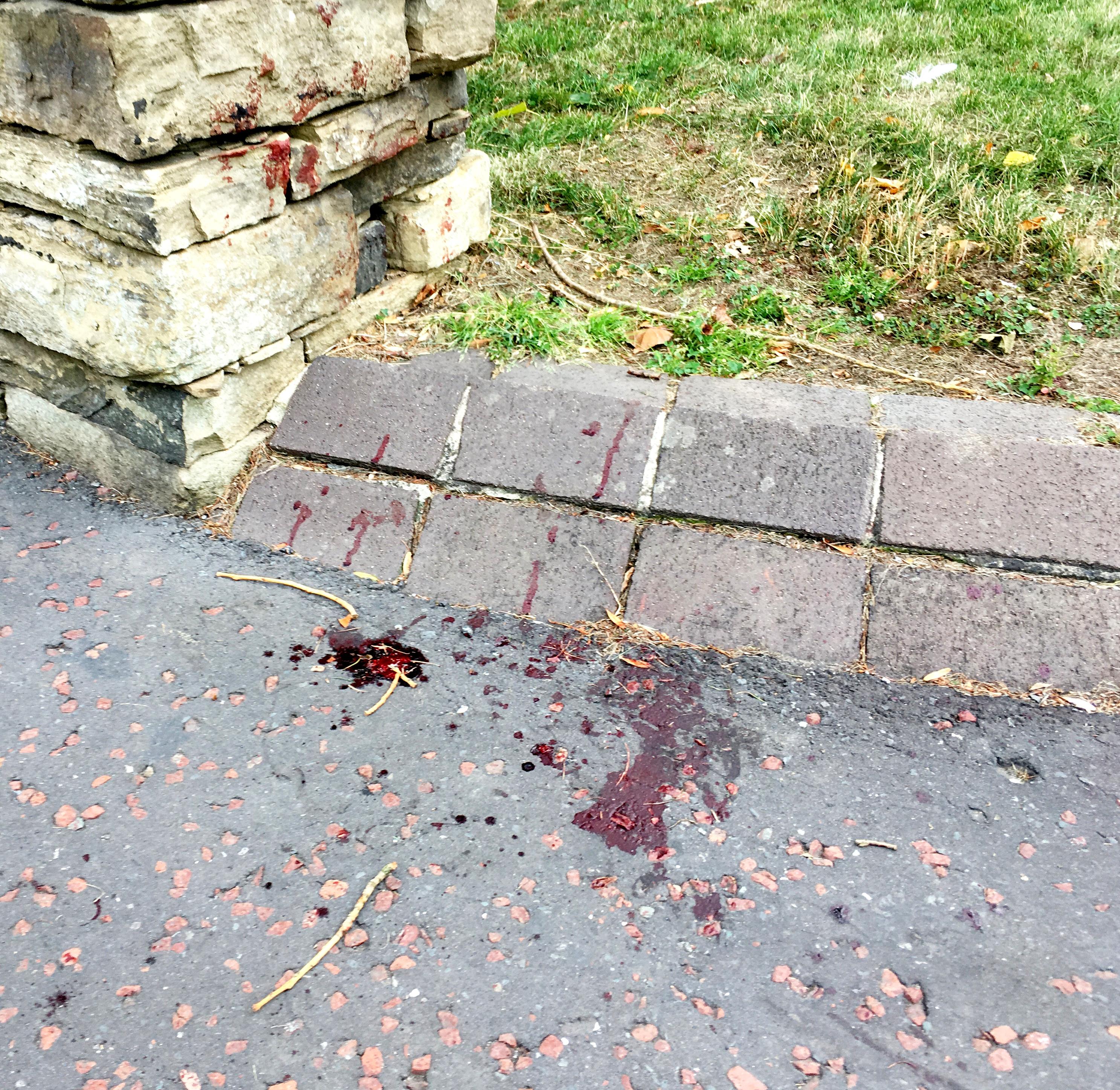 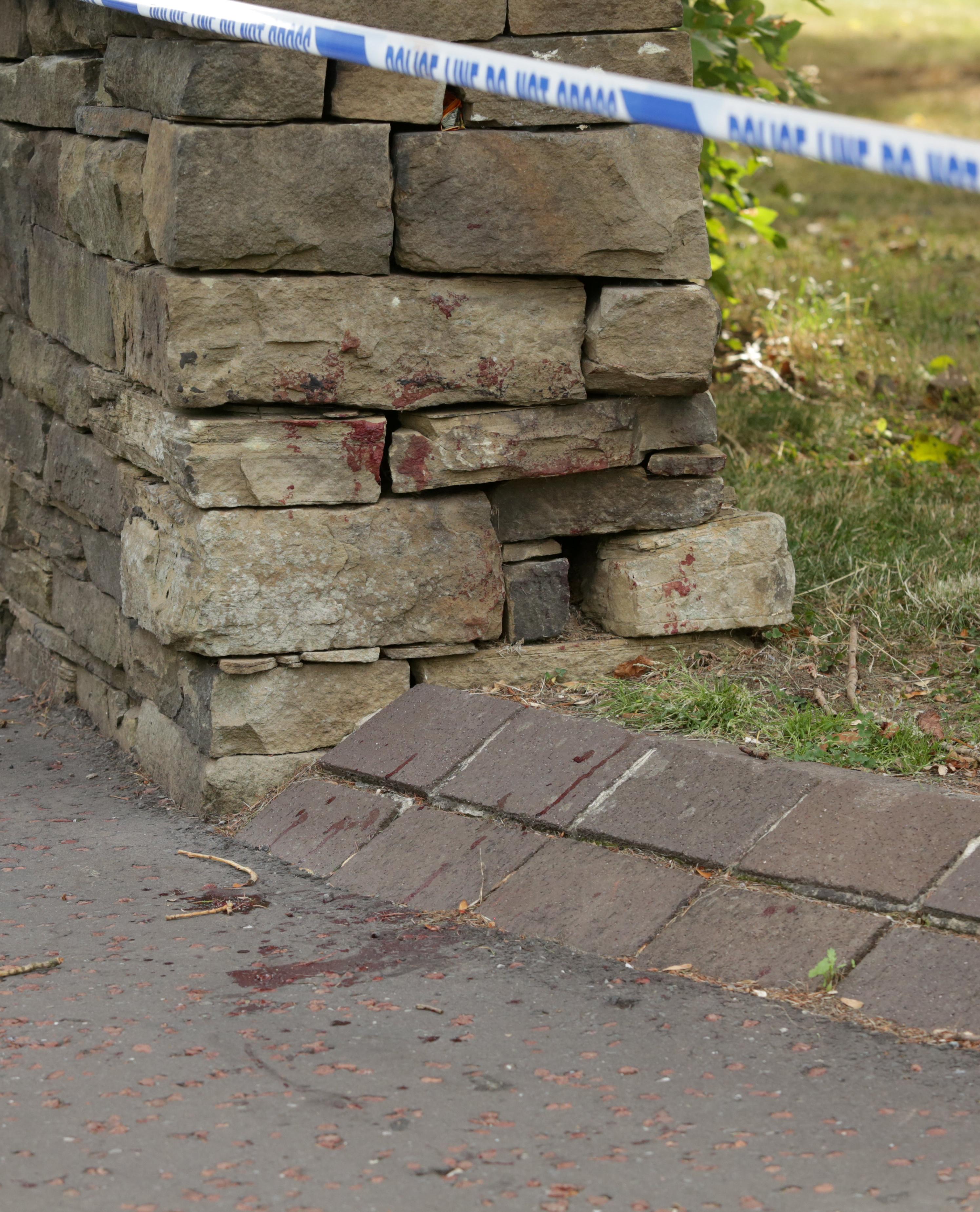 Speaking at the scene today, a man who gave his name only as Mark, said: "My wife was in hospital at the time.

"She heard a guy screaming please help. He was getting either stabbed or slashed.

"She heard some kind of noises which sounded like gunshots.

"Then she heard police come and shout armed police. She then said there were police everywhere.

"She was in a room above the foyer. She heard banging on the door but could not get out of bed because she had had an operation."

It's understood the hospital doors are locked after visiting hours and in-patients often stay overnight.

“I think he must have run to the hospital for help but has not got in. It really is a shocking thing to happen.”

The victim is still in hospital being treated for non-life threatening injuries to his hand.

BMI Healthcare confirmed no patients or hospital staff were involved. 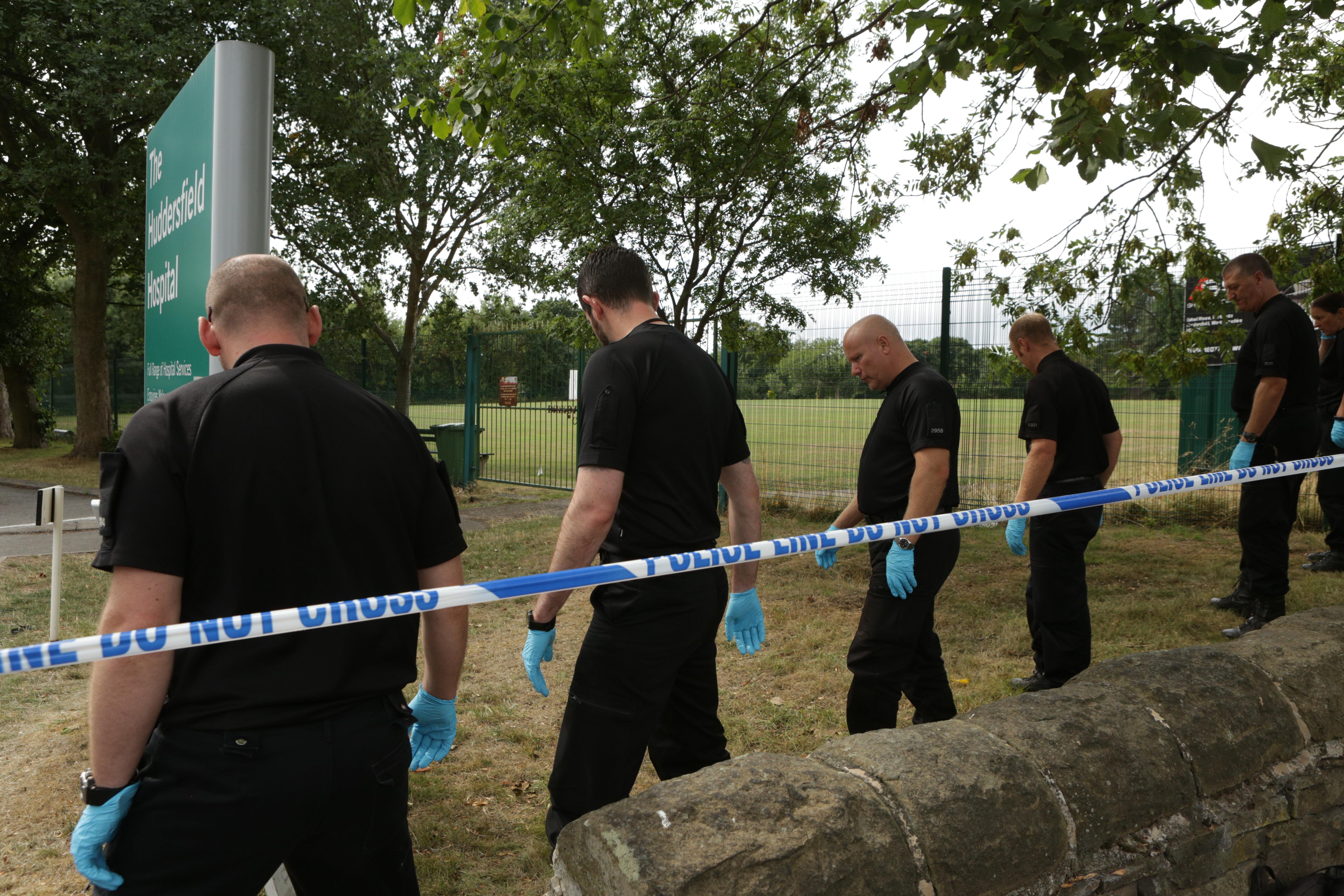 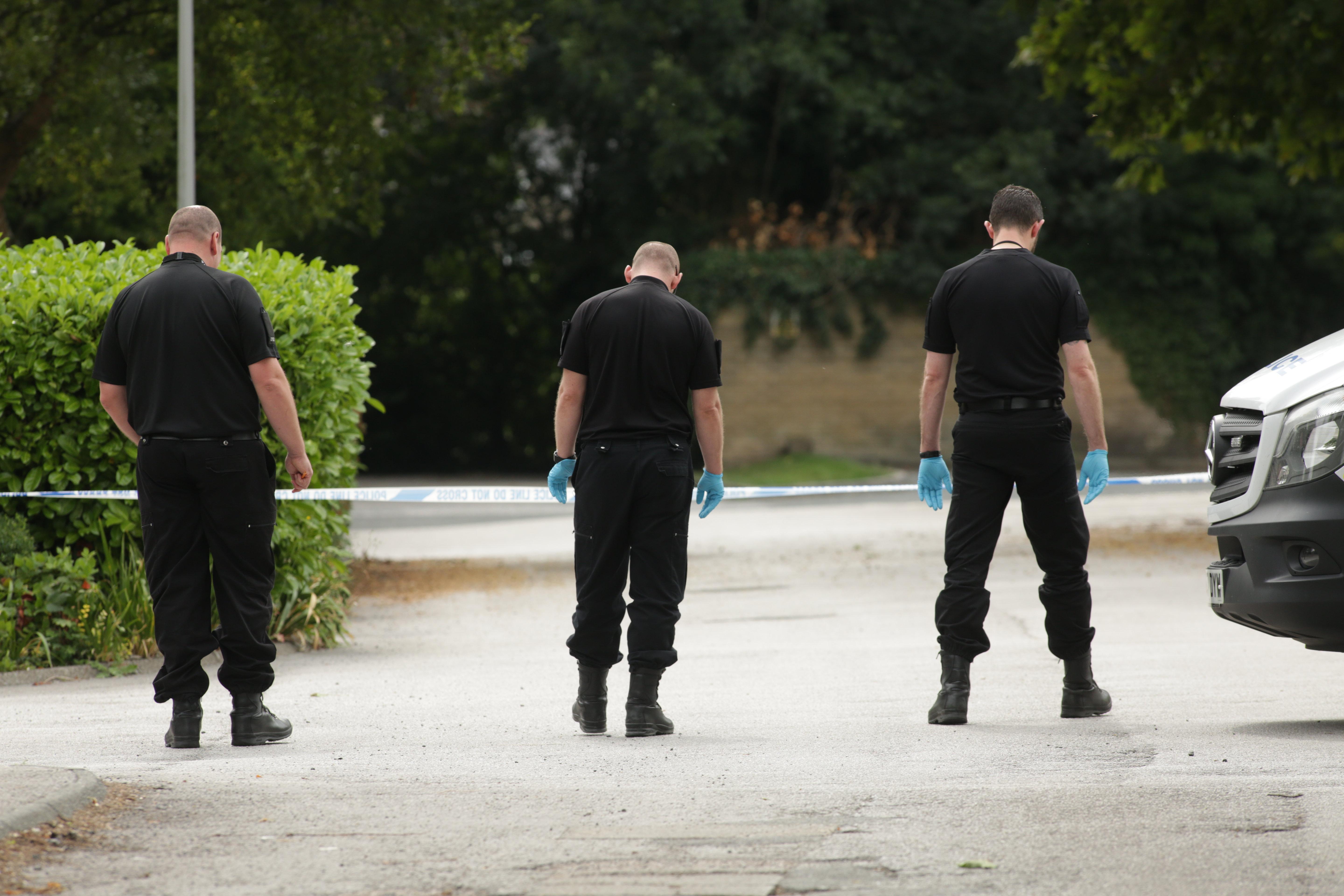 Another Birkby resident said he heard shotgun sounds last night, although this appears to have been hours before police were called.

He said: “We were sat out in the garden around 7.15[pm] and there was two or three shots which were different to any fireworks I’ve ever seen.”

Detective Inspector Mark Atkinson, of Kirklees District CID, said: “Our enquiries are in their early stages but it appears that this was a targeted attack. Neighbourhood officers will be carrying out reassurance patrols in the area.

“We would like to hear from anyone with information about the circumstances of what has happened or those involved.”

A message on the hospital's main phoneline said this morning: "Due to a major incident, the Huddersfield BMI Hospital will be closed until 7am on Thursday August 23. 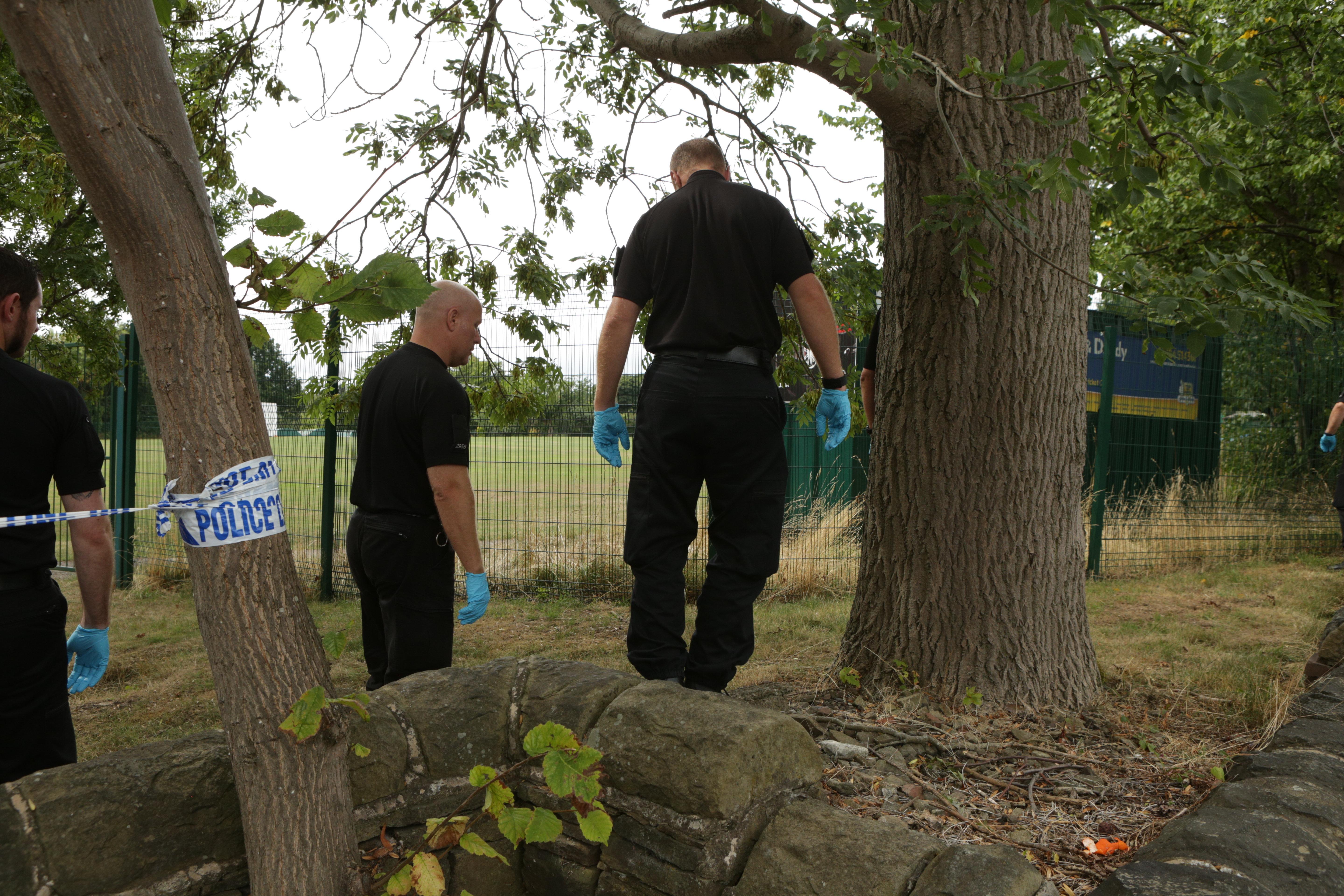 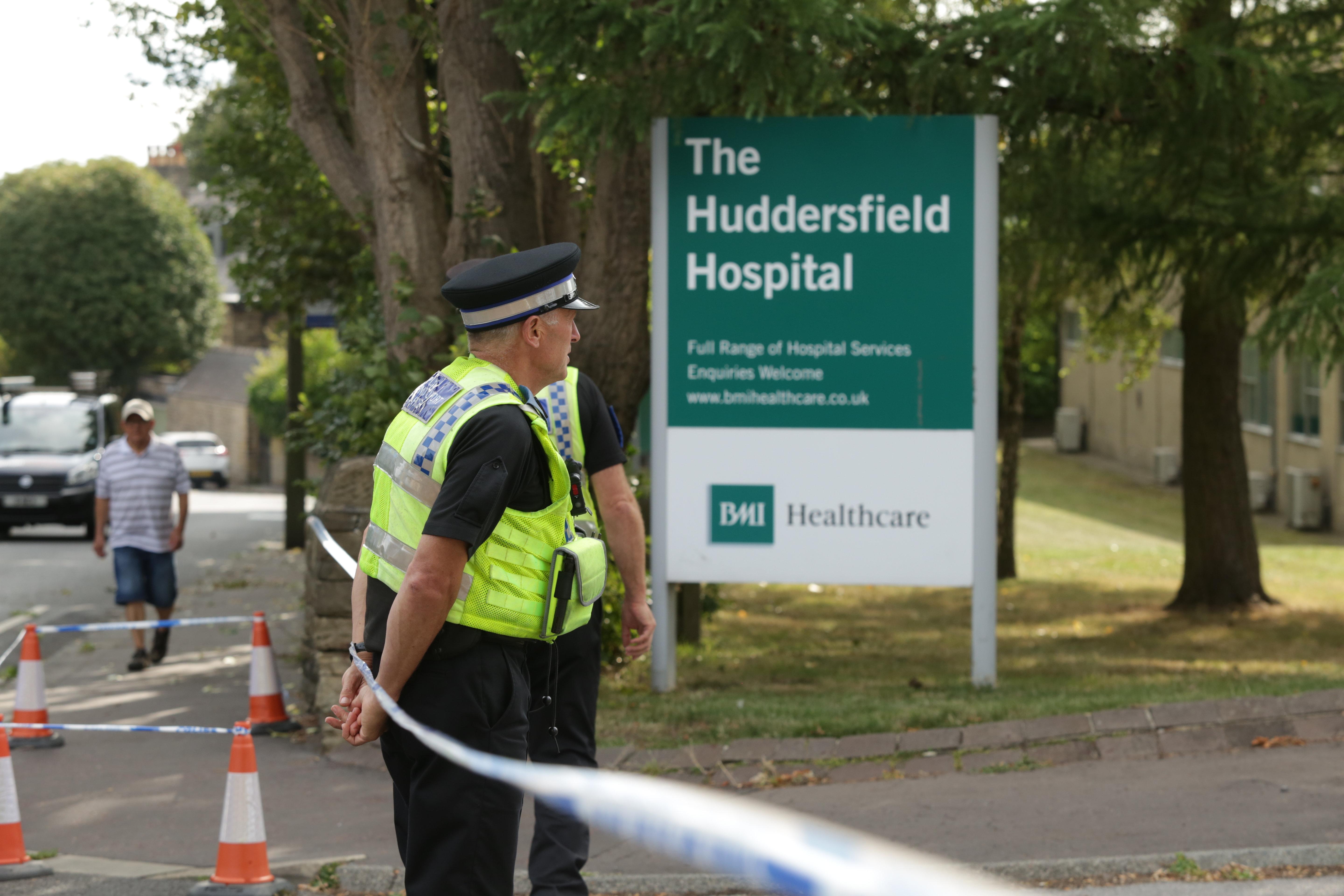 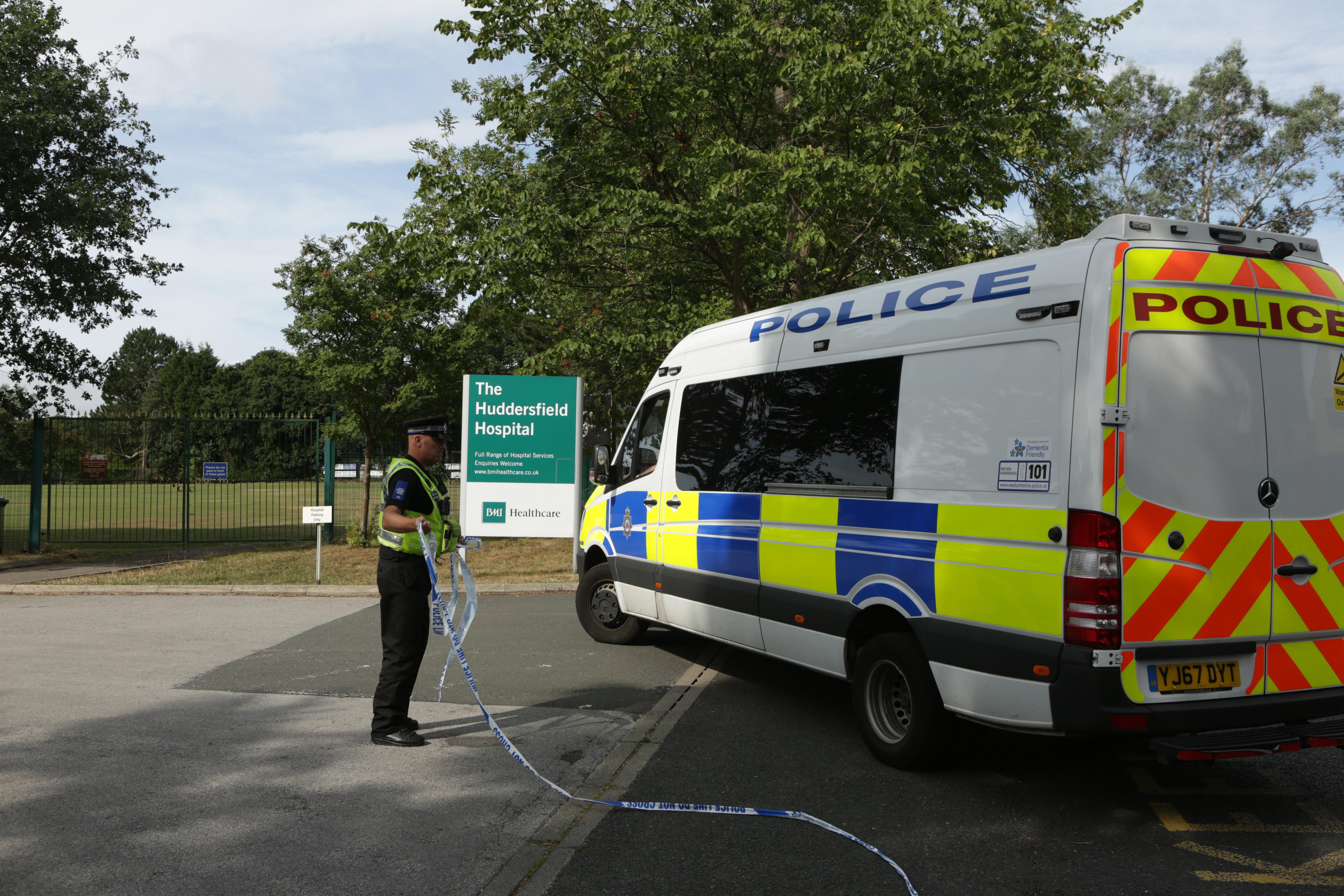 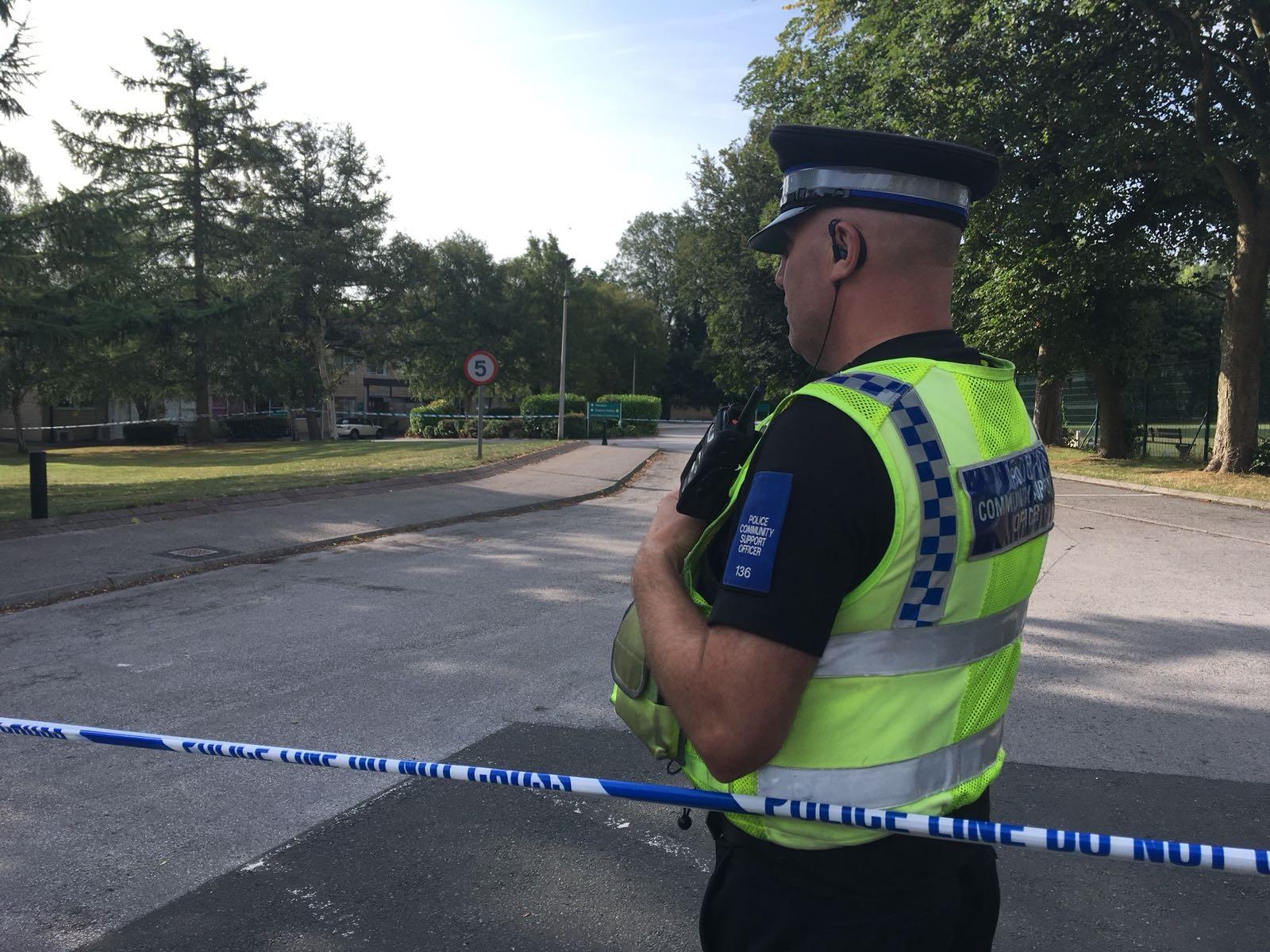 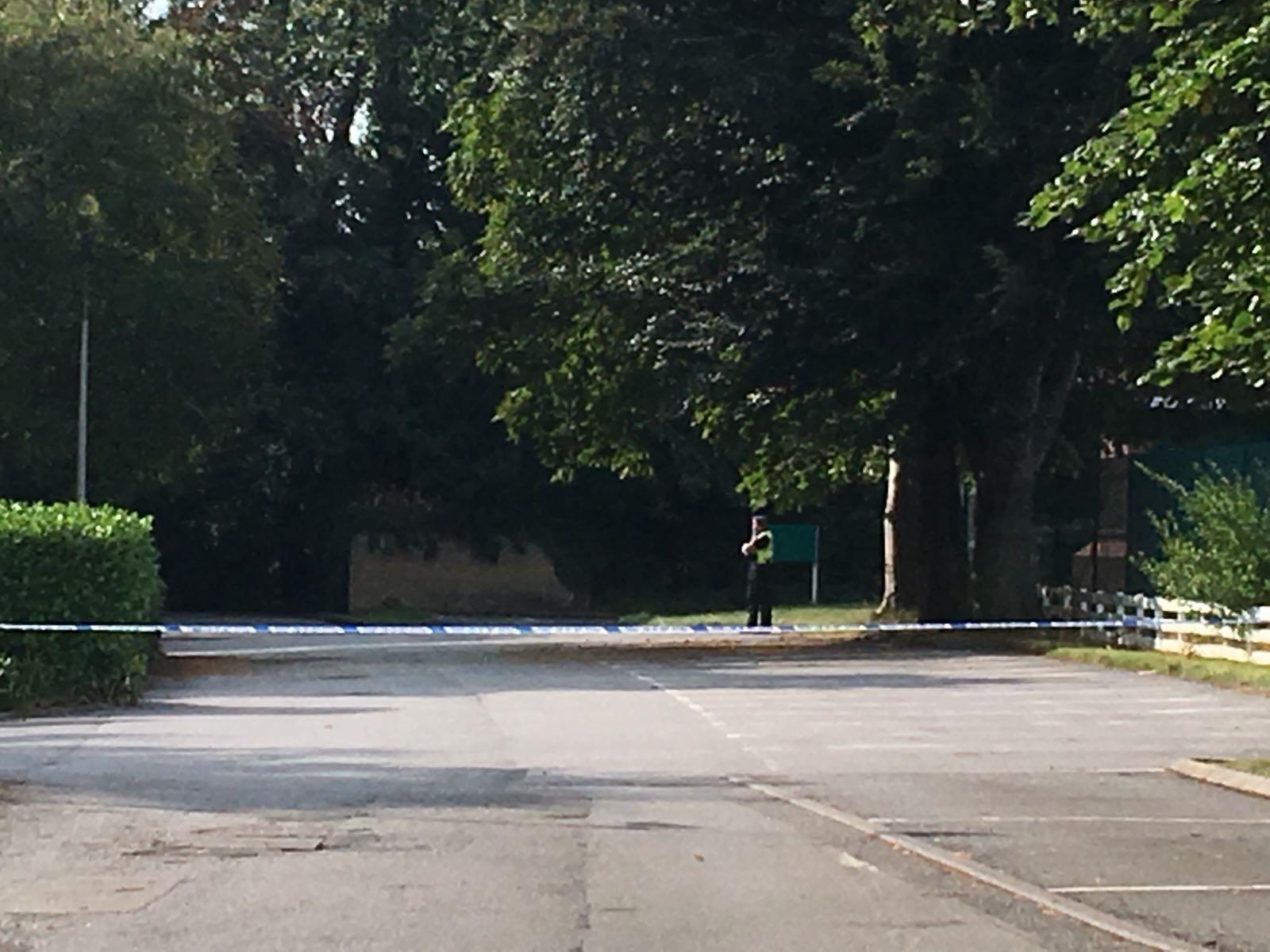 A Huddersfield Hospital spokeswoman added: "Given the police investigation, we took the decision in the early hours to close today, and have been in contact with patients who were due to attend to rearrange appointments.

"The events took place outside the hospital and did not involve our patients or staff, however we support the police’s appeal for information and extend our thoughts to all affected by the incident."

One witness said the area was “crawling with police” when she went past at 7.30am today.

Patients reported they were contacted in the early hours and told to not come in.

One said: “They rang at about 8am saying police had closed the hospital due to something going on. They wouldn’t say what.

“I was due to be in for 9am so it’s all very last minute. It’s not been re-arranged – they just said they’d be in touch.”

A spokesman for Huddersfield Hospital said earlier today: “We can confirm that the hospital is temporarily closed while the police investigate an incident which took place outside the hospital.

"We hope to reopen again tomorrow and have been in touch with patients who were due to attend.”

Anyone with information about this incident is asked to call Kirklees District CID via 101, quoting crime reference 13180417259. Information can also be given via the 101 Live Chat facility on the West Yorkshire Police website.