Incredible footage shows an enormous 23 stone shark being caught off the Welsh coast.

The monster porbeagle, which is about eight feet long, can be seen struggling at the end of a fisherman’s line in the fascinating underwater video.

Captured on Tuesday off the coast of Milford Haven, it is thought to be the biggest shark of its kind ever to be caught in Welsh waters.

Porbeagle are a type of mackerel shark from the same family as the Great White – the notorious man-eating species in the film Jaws.

They have squat bodies and are very powerful.

Though not considered particularly dangerous to humans compared with other sharks, they have been known to charge at divers working near oil platforms.

Distributed widely in the North Atlantic and Southern Hemisphere, porbeagles can be spotted in the UK in warmer summer months.

Angler Matthew Burrett reeled in the huge shark during a trip with the Phatcat Charters fishing group, based in Cardiff.

Skipper Craig Deans – who has more than 15 years of fishing experience – said: ‘I’ve been told it could be the biggest caught in Welsh waters but that hasn’t been officially confirmed yet. 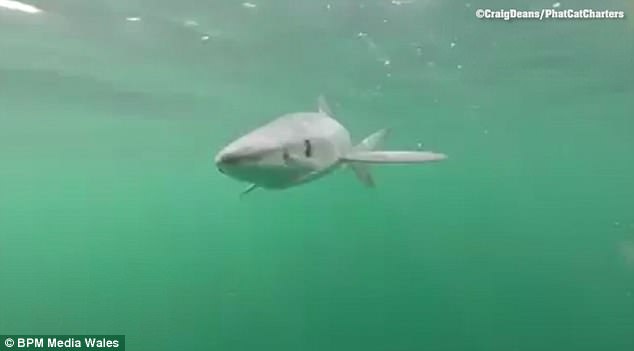 The monster porbeagle, which is about eight feet long, was captured off the coast of Milford Haven in Wales ‘I’ve never seen anything that big before, although I’m sure there are bigger fish out there.

‘When I saw the size of it, I was pretty shocked. We didn’t really see how big it was until it was brought up alongside the boat.

‘At one point it even jumped out of the water – like when you see Great Whites jumping out and attacking a seal.’ 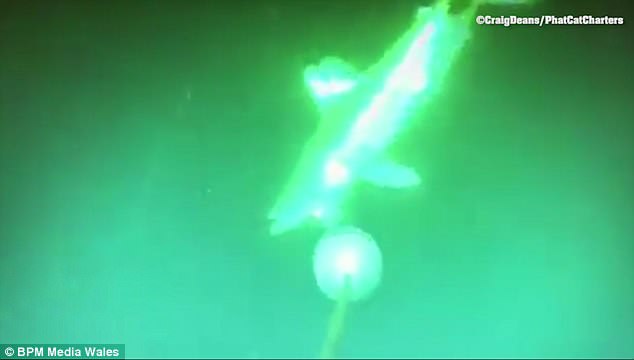 Fascinating footage shows the porbeagle struggling on the end of the fisherman’s line. It was safely released back into the water afterwards

Mr Deans and his crew are no strangers to catching large fish.

They also made headlines in 2015 after someone on board reeled in a 19-stone thresher shark, believed to be only the second of its kind ever caught off Wales.

They use barb-free hooks and a special hook extraction tool to try to ensure the pain-free release of the shark.