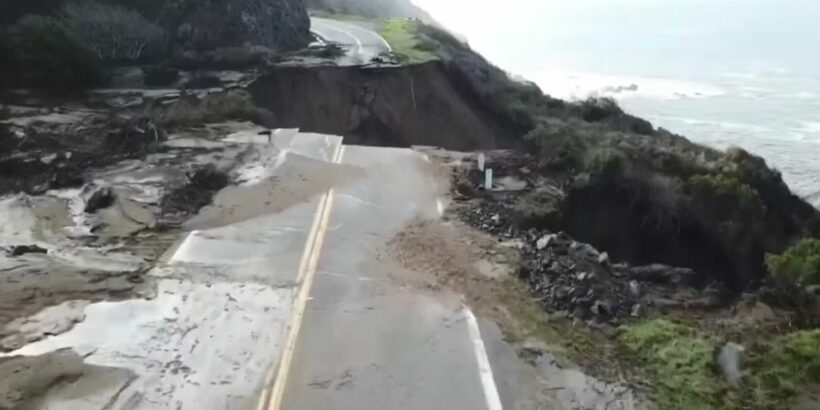 A huge crater has emerged on a highway after a rainstorm washed a large section of the road off to the sea.

The massive gap appeared in the scenic Highway 1, which runs along much of the California coast, south of Big Sur, on Friday.

Patrol officers said they first noticed a segment of the roadway collapsed on Thursday and called for assistance to repair the road.

By the next day the crews arrived, both lanes of the highway had washed out and fallen into the Pacific Ocean.

Drone footage shared by the Monterey County Sheriff's Office shows the mountain side highway opening up a huge hole with sections of the concrete road missing.

The trees are washing away in the mudslide, leaving a crater below the highway.

California Highway Patrol Officer John Yerace said he contacted the Caltrans crews after discovering the debris flow on Thursday, and issued an emergency contract to Papich Construction in San Luis Obispo County to assist with the repair.

He said on Friday: "Some time overnight, prior to 6:30 this morning, we responded back to the scene with the assistance of Caltrans access and realised that the roadway is now gone.

Officials have warned residents not to drive to the location to see the mudslide.

California governor Gavin Newsom has declared a state of emergency for Monterey and San Luis Obispo counties in response to winter storms that "threatened to cause mud and debris flows," forcing the evacuation of thousands of residents, according to the declaration.

Similar incidents happened in 2017 when a massive mudslide heaped tons of rocks on a quarter mile section of another stretch of the highway.