A huge sinkhole has opened up in the middle of a thoroughfare in a major Chinese city, swallowing a cleaning truck and a bike.

More than 1,100 rescuers have been sent to search for three missing people, who are believed to have been trapped in the massive hole for more than 36 hours, according to authorities of the city of Guangzhou.

The sinkhole measures as deep as 38 metres (124 feet), reported state media. Local metro authority said the accident was caused by the construction of a subway line. 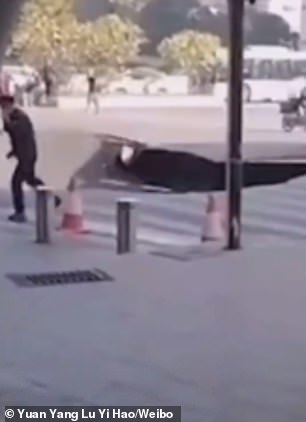 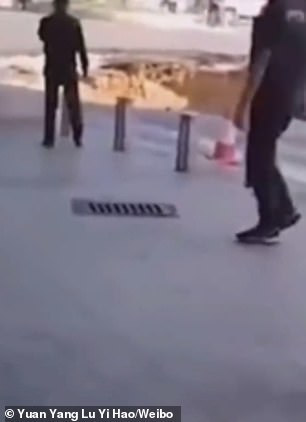 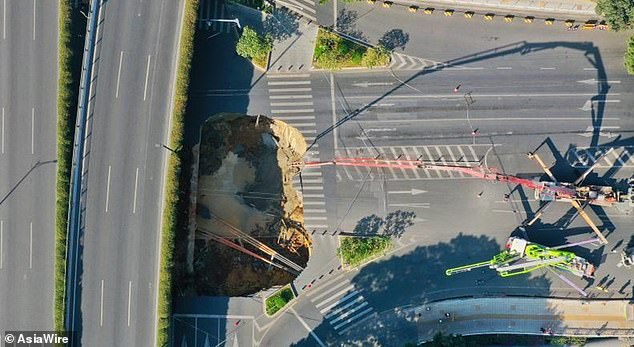 The sinkhole on a main road measures as deep as 38 metres (124 feet), reported state media 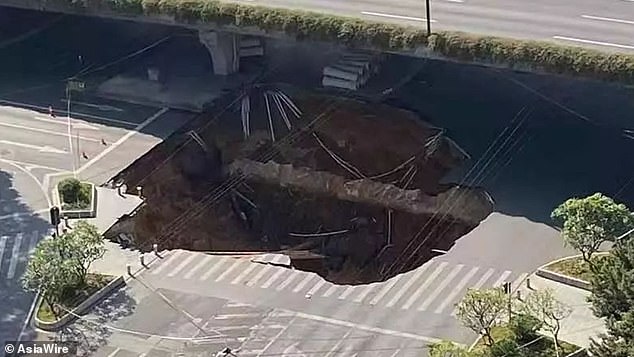 The road collapsed yesterday morning in the populous capital of Guangdong Province in southern China.

The sinkhole appeared at around 9:30am on Yudong Xi Road near the construction site of subway line 11, Guangzhou’s subway authorities said through its official account on Weibo, the Chinese equivalent to Twitter.

A cleaning truck and an electric bike fell into the hole as the road gave way, said the subway operator Guangzhou Metro.

Three people carried by the vehicles have been stuck in the crater, according to Chinese news outlet Sina.com citing state newspaper People’s Daily. 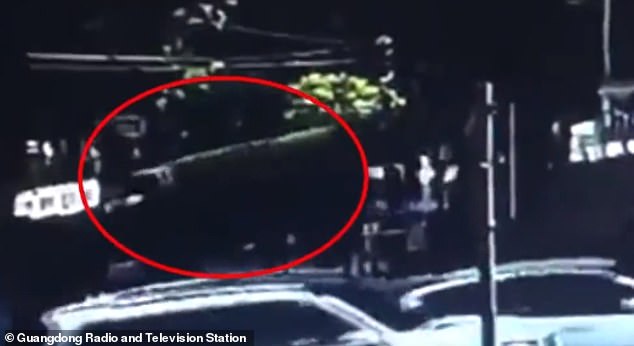 A clip released by Guangdong Radio and Television Station shows the cleaning truck plunging into the ground. Two people on the truck, who are father and son, are still trapped in the hole 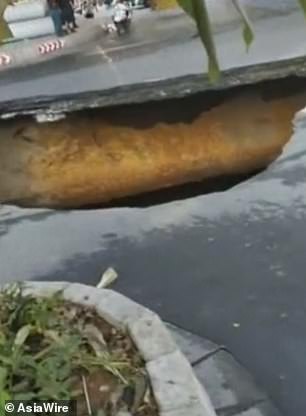 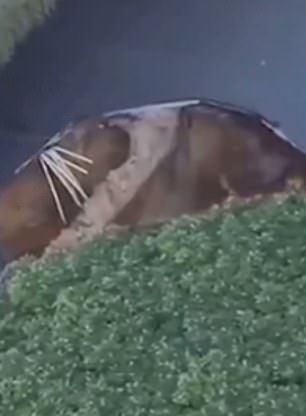 The sinkhole appeared at around 9:30am on Yudong Xi Road and near the construction site of subway line 11, said Guangzhou’s subway operator which has apologised over the accident

The sinkhole continued to grow during initial rescue works, posing challenge to firefighters who were trying to locate the victims, the report said.

A social media video shows pedestrians fleeing when the sinkhole opening up under a flyover.

A second video filmed from above shows the road continuing to give way.

A third clip released by Guangdong Radio and Television Station shows the cleaning truck plunging into the ground. 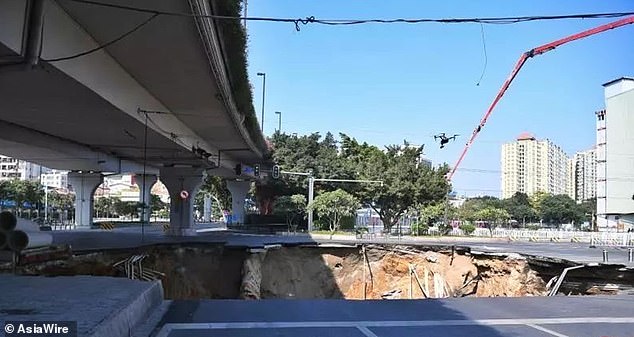 More than 1,100 rescue workers have been sent to the scene to look for the three victims 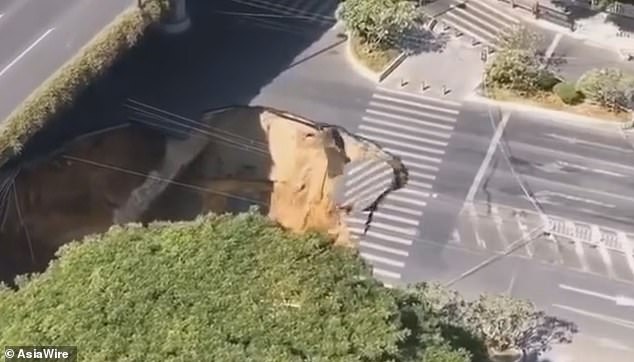 More than 1,100 rescue workers and 192 emergency response vehicles were deployed today as rescue works carried on, according to an updated post from Guangzhou Metro.

The authority said it had installed steel rods in the sinkhole to prevent further erosion.

It did not explain whether the rescuers had found any signs of the missing people or their vehicles.

Nearby roads were cordoned off until early Monday morning.

The victims included two people on the cleaning truck, who are father and son, reported Xinhua News Agency.

Shi Yi, 51, and Shi Kewei, 22, are originally from Hunan Province and work for the same cleaning agency in Guangzhou, according to the report.

The identity of the cyclist is yet to be revealed.

Guangzhou Metro has apologised to the public over the accident.

A sinkhole is a hole in the ground created by erosion and the drainage of water.

They can range in size from a few feet in diameter to the size capable of swallowing entire buildings.

They are a natural phenomena but the process is often amplified by human processes and interference.

There are two basic types of sinkhole which are separated by how they form.

Slow developing ones are known as a cover-subsidence sinkhole and those that appear suddenly are called a cover-collapse sinkhole.

The sudden holes which seize headlines are the latter and can cause devastation and even death.

Often, it involves soluble rock, such as limestone, becoming moist and eroding rapidly.

This then leads to a swift loss of land and a sinkhole emerges.