Hundreds of protesters rally after Polish government forces judges to retire and takes control of the Supreme Court, which oversees election results

Hundreds of anti-government protesters rallied in front of the Polish Supreme Court on Wednesday in an act of solidarity with the court’s president, who is being forced to retire under a new judicial overhaul.

The protesters accused the right-wing government of violating the country’s own constitution by forcing the retirement of First President Malgorzata Gersdorf and other justices, decrying the development as a decisive step in the destruction of Poland’s constitutional democracy.

After already having taken control of common courts and the constitutional court, the ruling right-wing Law and Justice party now has captured control of the Supreme Court, the final appeals court for all civil and criminal cases, and the body that authorizes election results. 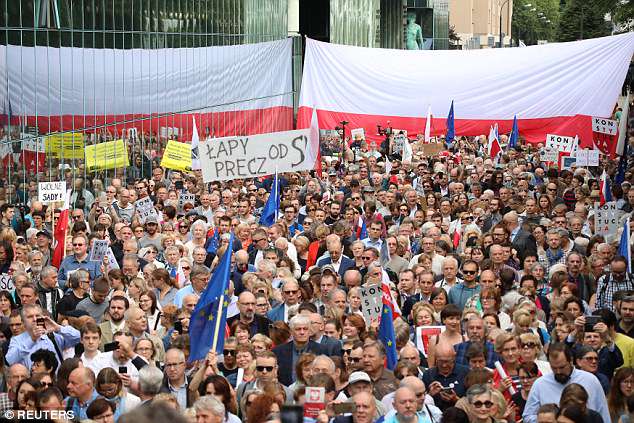 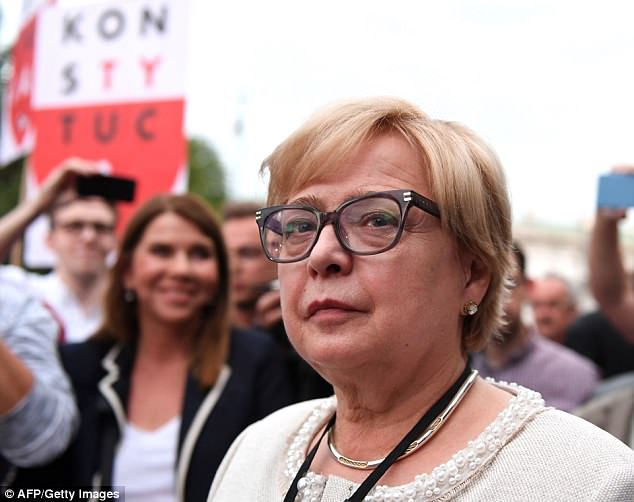 The new law, which took effect Tuesday, lowered the mandatory retirement age to 65 from 70 for Poland’s Supreme Court justices. That forces Gersdorf, who is 65, and as many as one-third of the court’s 73 sitting judges to step down, unless they ask the president for special permission to remain and he grants it.

The court’s press office said that on Wednesday 63 justices were working, meaning 10 appeared to have accepted their retirement under the new law. But the office said that only 55 remaining judges will be given new cases because eight judges, including Gersdorf, have not filed a request for an extension.

Gersdorf still showed up for work Wednesday, insisting that her six-year term runs through 2020, according to the constitution. Arriving at the Supreme Court building to applause, she thanked the crowd and said she was acting to protect Poland’s constitution and the rule of law.

Gersdorf then presided over a meeting of the justices that decided an organizational matter. There were no disturbances or any force used to prevent her from entering the court. But it was not clear how her dispute with the government over the matter could be resolved.

Protesters chanted ‘Judges are not removable!’ and ‘Constitution!’ and then marched to the Presidential Palace to show their disapproval of the law co-authored by President Andrzej Duda. They accused Law and Justice, whose acronym in Polish is PIS, of dictatorial tendencies. Some wore a sticker that said ‘PIS off,’ in English.

‘We have the right to live in a free country with a constitution,’ said Monika Czerniakowska, 50. She said once a government violates the constitution, ‘anything can happen. Look what’s happening in Hungary. How far can we go?’ 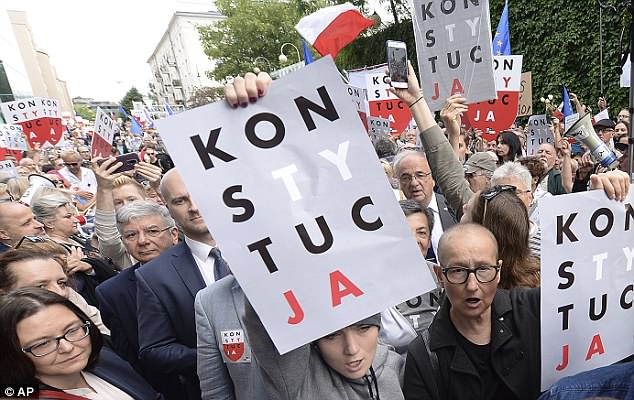 The Law and Order party already has control of the common court and constitutional court, and if it seizes the Supreme Court it will control the body that authorizes elections 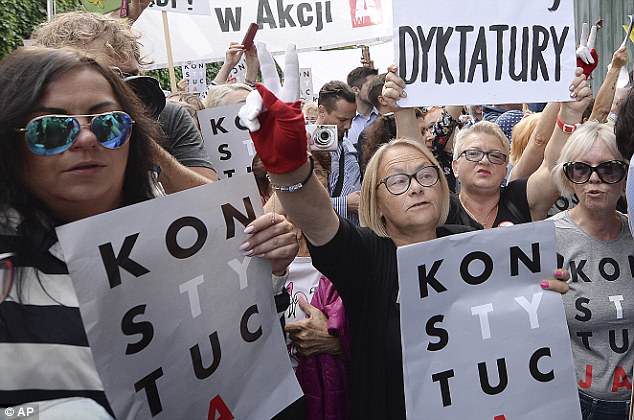 European Union officials and human rights groups have expressed alarm at changes to the Polish court system, alleging the moves represent an erosion of judicial independence that violates Western standards.

The European Commission, which polices compliance with EU laws, opened an infringement procedure Monday against Poland over the Supreme Court law.

On Wednesday, Prime Minister Mateusz Morawiecki defended his government’s policies under tough questioning from lawmakers at the European Parliament in Strasbourg, France. Some accused his government of backtracking on Poland’s democratic gains, saying the new laws put the courts under political control.

He insisted that Poland has the right to shape its judicial system, and argued that the changes mark a step forward.

‘We don’t want to rock the European boat,’ Morawiecki said. ‘We only want our individual, national values to be respected.’

In a debate dedicated to Europe’s future, Morawiecki also got support from some who backed Warsaw’s arguments that an overreaching EU was meddling in a sovereign state’s internal affairs.

The government insists it is improving Poland’s justice system, saying it was inefficient and controlled by an untouchable ‘caste’ of judges. It argues that putting judges under the control of the legislative and executive branches makes the courts answerable to voters.

Back in Warsaw, some of the thousands of protesters feared the ruling party would now use its power to falsify elections. Many said they were now putting their hopes in the EU to preserve the rule of law in their homeland.

‘This is not a democratic country governed by law anymore,’ said Krzysztof Trzesniowski, a 57-year-old protester. Surrounded by a large number of people, he looked at his phone and saw state television – which is controlled by the ruling party – reporting that there was no crowd of protesters. ‘Orwell,’ he said, referring to the dystopian novel ‘1984’ by George Orwell.