BAGHOUZ, Syria (Reuters) – Islamic State faced imminent defeat in its final enclave on Tuesday as hundreds of jihadist fighters and their families surrendered and the U.S.-backed Syrian Democratic Forces said the battle was as good as over. 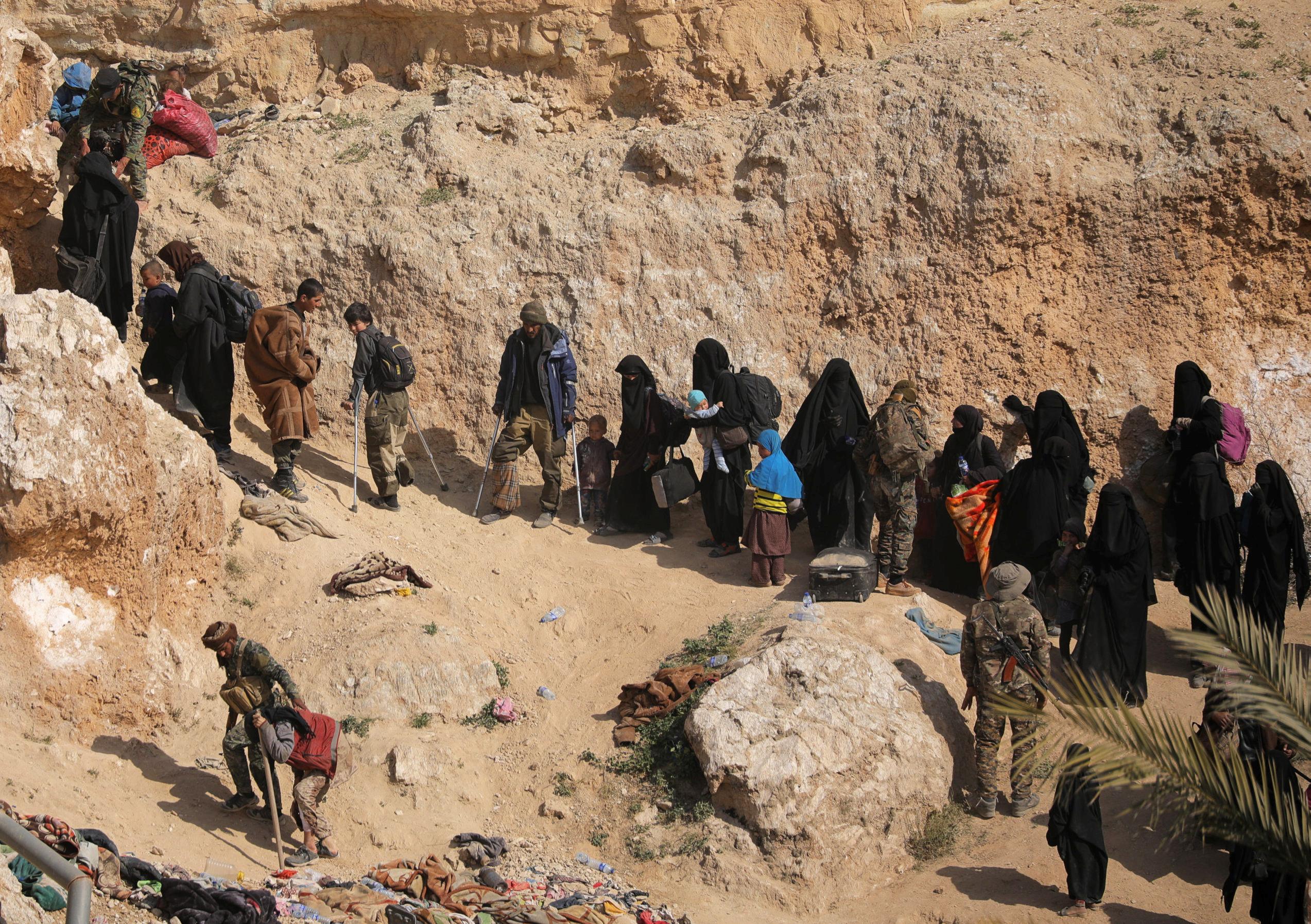 A Reuters journalist in Baghouz saw hundreds of people surrendering to the SDF, which launched its final attack to capture Baghouz on Sunday, backed by U.S.-led international coalition air strikes after weeks of siege.

The enclave is the last shred of territory held by the jihadists who have been driven from roughly one third of Iraq and Syria over the past four years.

The ferocious assault continued late on Tuesday. Live footage broadcast by the Kurdish Ronahi TV showed a series of large explosions lighting up the night sky over Baghouz, apparently from an ammunitions dump blowing up.

Smoke billowed past burning buildings, lit orange by flares and raging fires, as tracer fire poured into the enclave amid the sound of constant shooting and blasts.

SDF official Mustafa Bali said on Twitter on Tuesday that the number of Islamic State members who had surrendered has risen to 3,000.

“Once our forces confirm that everyone who wants to surrender has done so … the clashes will resume,” he said, adding that the jihadists’ defeat was very near.

The coalition said in an email earlier on Tuesday there were an estimated “few hundred” foreign Islamic State fighters remaining in Baghouz who had decided to fight to the end.

The Baghouz enclave had been pounded on Monday with barrages of rockets, but the situation calmed on Tuesday morning before the intense bombardment resumed.

“The operation is over, or as good as over, but requires a little more time to be completed practically on the ground,” SDF spokesman Kino Gabriel told al-Hadath TV.

The SDF has laid siege to Baghouz for weeks but has repeatedly postponed its final assault to allow thousands of civilians, many of them wives and children of Islamic State fighters, to leave. It resumed the attack on Sunday.

The SDF, which is spearheaded by the Kurdish YPG militia, has been advancing slowly into Baghouz to minimize its losses from sniper fire and landmines.

Three SDF fighters have been killed, Bali said on Twitter.

Islamic State’s defenses include extensive tunnels. The militant group’s most hardened foreign fighters are holed up inside the enclave, the SDF has said.

However the United States does not believe any senior Islamic State leaders are in Baghouz, assessing they have gone elsewhere as part of the group’s shift toward guerrilla tactics, a U.S. defense official has said.

Fighters surrendering from Baghouz are questioned and searched.

While Baghouz is the last populated territory of what was once the group’s self-proclaimed “caliphate”, fighters still operate in remote areas elsewhere. It is widely assessed that they will continue to represent a potent security threat.

Even as the last shred of its physical statelet crumbled, the group put out a new propaganda video, filmed in recent weeks inside Baghouz, insisting on its claim to leadership of all Muslims and calling on its supporters to keep the faith.

“Tomorrow, God willing, we will be in paradise and they will be burning in hell,” it showed an Islamic State member identified as Abu Abd al-Azeem saying.

Most of the people evacuated from the diminishing Islamic State territory have been transported to a camp for internally displaced people in al-Hol, in northeastern Syria, where the United Nations says conditions are dire. 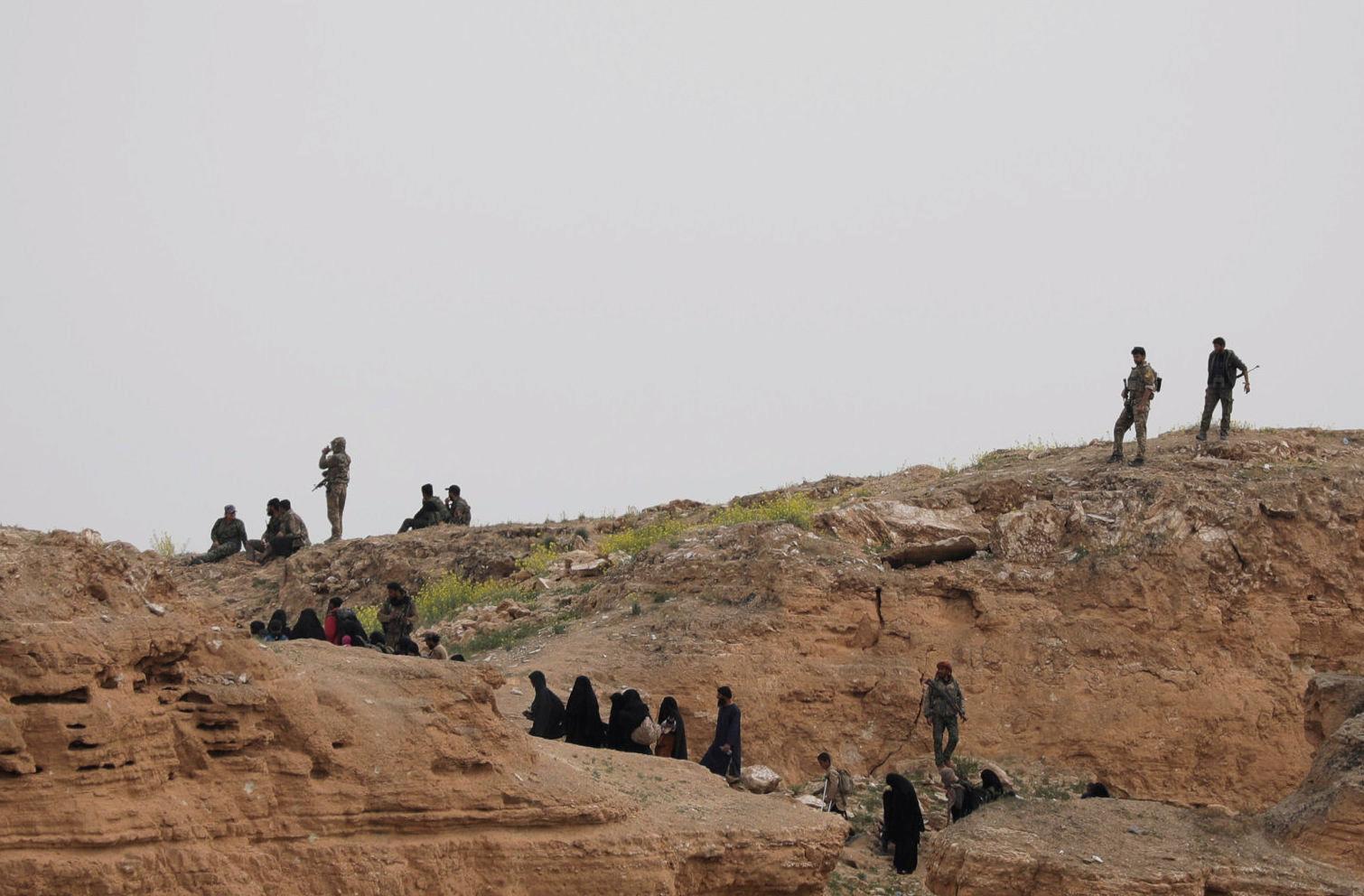 The camp, designed to accommodate 20,000 people, is now sheltering more than 66,000. The World Health Organization said on Tuesday 106 people, mainly infants, have died since December on the journey to al-Hol, which takes at least six hours.

Those issues were underscored on Friday with the death of the newborn son of Shamima Begum, a British woman who left London to join Islamic State when she was a schoolgirl. Britain stripped her of her citizenship on security grounds last month.