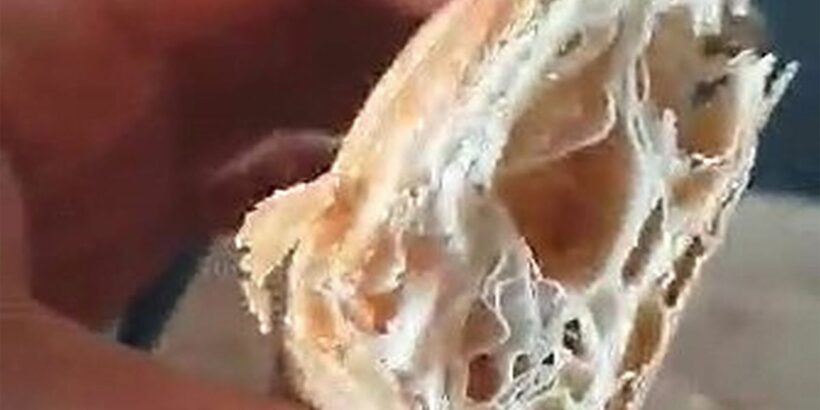 A hungover woman filmed the moment she eagerly cut into a Greggs sausage roll only to discover it was completely hollow.

Kayleigh O'Brien jumped on the Just Eat app on October 9 to order herself a good hangover cure when she spotted Greggs delivered to her home as she fancied a sausage roll.

However, when her meal arrived, she thought the bag carrying the pastry delights felt lighter than it should be.

The 30-year-old from Warwick cut into the nation's beloved pastry treat but found it completely devoid of sausage meat leaving an empty pastry vessel.

Kayleigh said: "I was gutted. Everyone loves Greggs sausage rolls and I really fancied one that day. The meat inside is a pretty big part of the experience.

"I had been out the night before with my boyfriend so when we woke up about the middle of the day we were a bit hungover and just needed some food.

"We didn't fancy a McDonald's breakfast and then I noticed Greggs was on Just Eat. We just ordered these two sausage rolls, a chicken and bacon baguette, a tuna sandwich and a couple of coffees.

"When the food came, I opened the bag and one of the sausage rolls felt hollow and really light. I turned to my boyfriend and said this hasn't got a sausage in it, and he didn't believe me.

"I couldn't understand how they didn't tell there wasn't a sausage inside. I took a video of me cutting it open for proof."

Kayleigh and her boyfriend ended up having to split the only full sausage roll between them before she sent the video evidence to Just Eat.

She was refunded and given a voucher for her future orders.

Kayleigh's video has been viewed more than 442,000 times online, with many people joking the sausage roll was a "vegan" one while others said they were "hurt" for her.

One commenter joked: "Ohhh this is the new vegan sausage roll."

A third said: "From one Kayleigh to another Kayleigh, I'm so sorry. I love sausage rolls."

While a fourth simply wrote: "I'm hurt for you."

A Greggs spokesperson said: "Oh crumbs! We certainly didn't intend for our sausage roll to be given to this customer without the sausage.

"Our crisp, golden puff pastry is certainly delicious, but it's the seasoned sausage within that makes it such a favourite with millions of people across the UK. The customer has been refunded and offered a voucher so they can get themselves a free sausage roll on us."

Just Eat has been approached by the Daily Star for comment.