Hurricane Dorian is the latest storm system to form in the Atlantic Ocean after a brief period of calm. Dorian started as a tropical storm near Puerto Rico, which is still suffering the effects of hurricane Maria, which devastated the US territory in 2017. Weather forecasters predict the hurricane will soon hit Florida, and state mayor Rick DeSantis has declared a state of emergency for all 67 counties.

The latest update from the NOAA reads: “Dorian is moving toward the northwest near 10 mph (17 km/h).

“A slower west-northwestward to westward motion should begin tonight and continue into early next week.

“On this track, the core of Dorian should move over the Atlantic well north of the southeastern and central Bahamas today and tomorrow, be near or over the northwestern Bahamas on Sunday, and be near the Florida peninsula late Monday.

“Dorian is expected to become a major hurricane later today, and it will remain an extremely dangerous major hurricane while it moves near the northwestern Bahamas and approaches the Florida peninsula into early next week. 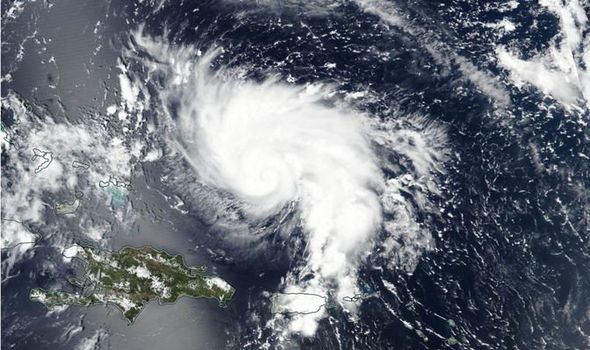 The latest warning states life-threatening storm surges could build water levels in the Bahamas by up to 15-feet more than normal.

The NHC said: “A life-threatening storm surge will raise water level by as much as 10 to 15 feet above normal tide levels in areas of onshore winds in the northwestern Bahamas.

“Near the coast, the surge will be accompanied by large and destructive waves.”

There are several other threats from the storm, including dangerous surf, wind and flash floods.