Hurricane Dorian threatens to bring devastation to parts of America as the extremely powerful Category 5 storm swirls towards mainland US. The National Oceanic and Atmospheric Administration (NOAA) have also released a video on social media of a jet flying through the eyewall of the hurricane. The shocking video shows the vast scale of the massive hurricane, with the dark clouds producing what experts call the “stadium effect”.

The National Hurricane Centre (NHC) wrote on Twitter: “Here’s a look at what scientists call the ‘stadium effect’ inside the eye of Dorian from NOAA scientists. This happens at times in very strong hurricanes.”

The hurricane is currently is around 40 miles east of Freeport Grand Bahama Island and is thought to be approximately 125 miles east of West Palm Beach in Florida.

In a recent update, the NHC said Hurricane Dorian will move “dangerously close to the Florida east coast” tonight through Wednesday evening.

On Dorian’s outlook, the NHC said: “At 200 AM EDT (0600 UTC), the centre of Hurricane Dorian was located by an Air Force Reserve Unit Hurricane Hunter aircraft and NOAA Doppler radar near latitude 26.6 North, longitude 78.1 West. Dorian is moving toward the west near 5 mph (7 km/h). 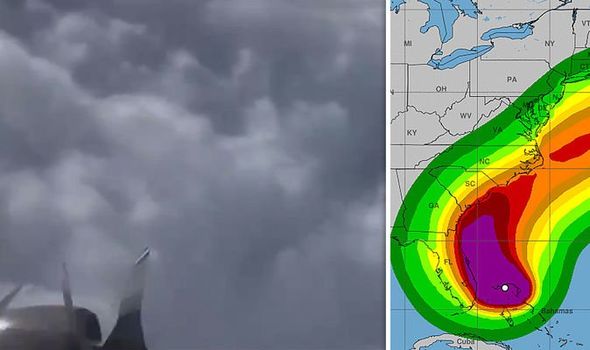 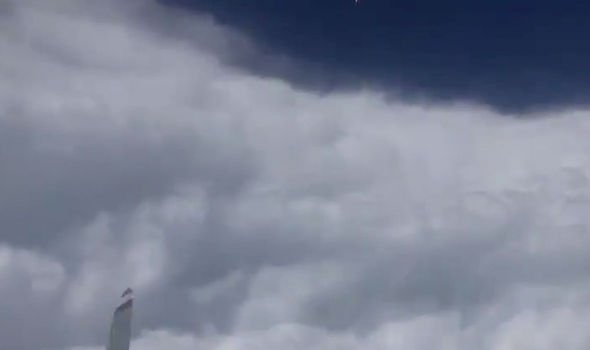 “A slower westward to west-northwestward motion is forecast during the next day or so, followed by a gradual turn toward the northwest and north.

“On this track, the core of extremely dangerous Hurricane Dorian will continue to pound Grand Bahama Island through much of today and tonight.

“The hurricane will move dangerously close to the Florida east coast tonight through Wednesday evening.”

It adds: “Although gradual weakening is forecast, Dorian is expected to remain a powerful hurricane during the next couple of days.” 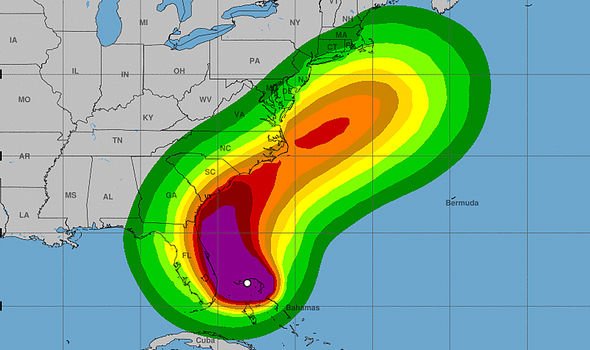 Hurricane Dorian is the second-strongest Atlantic storm on record, after reaching wind speeds a destructive 185mph when it made landfall on the Abaco Islands yesterday.

Residents posted images online of water rising up the side of their houses as the National Hurricane Center warned of a possible storm surge that could push destructive waves higher than many roofs in the islands.

Ron DeSantis, the Governor of Florida, has warned about the potential incoming impacts of the ferocious storm. 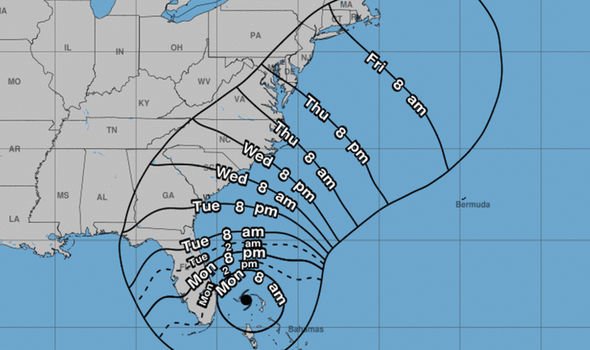 He wrote on Twitter: “As we continue to monitor Dorian, all Floridians should follow local reports and all evacuation orders.

“We are ready to deploy assets as needed and will continue to monitor traffic and fuel levels as more counties come under hurricane watches and warnings.”

US President Donald Trump said: “I ask everyone in Hurricane Dorian’s path to heed all warnings and evacuation orders from local authorities.

“We want to minimise any unnecessary risk to the public and our brave first responders who have been working very hard on getting fuel brought in.”