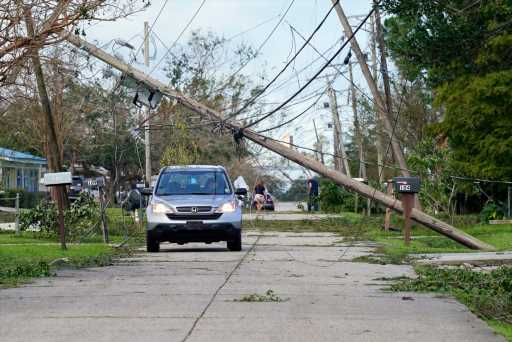 Storms like Ida used to not come very often but, for the second year in a row, an extremely intense hurricane slammed into Louisiana with power that is becoming more and more common to see.

Ida was the 11th named storm, the fourth hurricane and the second major hurricane of the 2021 Atlantic hurricane season. And all forecasts call for more storms to form before the season “ends” on Nov. 30. Let’s take a minute and let the power of the storm that was just experienced by the Gulf Coast sink in.

Ida made landfall in Port Fourchon, La., just before noon on Sunday. Coincidentally, Sunday was also the 16th anniversary of Hurricane Katrina back in 2005. With winds of 150 mph, Ida was the strongest hurricane to make landfall in Louisiana since … 2020 … when Laura came ashore with sustained winds of 150 mph. Last Island hurricane that hit the Louisiana coast in 1856 also came onshore with winds of 150 mph, so having back-to-back hurricane seasons with a storm of this magnitude is not only unlikely but exceedingly rare. There are only three other instances in Louisiana’s hurricane history where two intense hurricanes made landfall within two years time of each other.

“This puts it in elite company as a top 10 RI rate in a day on record for the Atlantic Basin,” Alex DesRosiers, a graduate research assistant in the Department of Atmospheric Science at Colorado State University, said. “This is also the furthest north a pressure drop of this magnitude has occurred in an Atlantic hurricane.”

There is a lack of sufficient data relating to the rapid intensification of tropical cyclones but each year, more data is added and as it is added, the process of RI becomes more clear. The National Hurricane Center handles all forecasts for tropical systems in the Atlantic and the central and eastern Pacific. They were able to forecast the rapid intensification of Ida with near-perfect accuracy from three days out. It’s a sign that the science of meteorology is progressing and these types of storms are becoming more predictable to some degree.

Some of Louisiana’s strongest storms have happened since 2000, a sign that this isn’t going to be a storm of rare occurrence.

“Evidence suggests that as our climate changes, the global average intensity of the strongest tropical cyclones is increasing,” DesRosiers said.

DesRosiers added that “the global proportion of cyclones reaching Category 4 or 5 intensity is increasing in recent decades.”

A theme between this hurricane season and last year is that storms have been tapping into the heat from the Gulf of Mexico, which has been running much warmer than normal. Hurricanes thrive off of warm ocean waters and when ocean water temperatures soar into the 80s to near 90 degrees, that is a prime source of energy for a cyclone to use. The combination of warm waters and light winds aloft allows storms to strengthen very quickly. As the Gulf of Mexico warms and the atmosphere becomes more conducive for storm development, “extreme” storms that wreak havoc on coastal communities may become the norm.

Storm surge, one of the deadliest components of hurricanes, came in with a vengeance. The expected 9 to 12 feet of storm surge Hurricane Ida produced submerged buildings and crossed over levees and trapped people in their attics and on their roofs. This same surge of water was being pushed into all of the outflowing rivers in this region. Many rivers, including the great Mississippi, actually saw the water flow reverse for a short time. The winds of Ida were so strong that the water was being pushed back upstream causing more issues with flooding and stressing levee systems even more.

A river flow reverse like this is not common but it has happened before. Hurricane Isaac in 2012 produced this same phenomenon, as did a few other storms, but Ida is definitely joining a small group of storms that had the power and potential to do this.

Another amazing feat that Ida accomplished was maintaining its strength well after landfall. Since cyclones feed off of warm waters, once it gets over land the storm should start to weaken dramatically, but Ida didn’t. Ida remained a major hurricane for several hours after landfall and maintained hurricane strength for an impressive amount of time.

There are two reasons for this.

“The first being the storm was rapidly intensifying at the time of landfall. Hurricanes in the process of intensifying take longer to begin weakening when encountering adverse conditions.” DesRosiers said. “The second reason is a phenomenon coined the ‘Brown Ocean Effect.’ The idea is that Southeastern Louisiana is composed of swamps, wetlands and saturated soils from heavy repetitive rains this year beginning long before Ida. This provided an energy source allowing Ida to maintain its structure and intensity further inland.”

There are still more than three months remaining of the 2021 hurricane season and peak season is still a couple of weeks away. More storms with more Rapid Intensification and power may be in the forecast. CSU issues hurricane season forecasts every year and updates them multiple times a month during the season. Accounting for the activity that has already taken place in the Atlantic basin, “the CSU seasonal forecast calls for seven additional storms, four of these reaching hurricane intensity and two of those reaching major hurricane (Category 3 or higher) status,” DesRosiers said.

For those along the southeast coast of Louisiana, this hurricane season has already been an extremely emotional and violent ride which proves that it only takes one storm to greatly impact you. More than a million customers remain without power in Louisiana and Mississippi. As with every hurricane season, it only takes one storm for it to be a memorable one and unfortunately, there may be others that have to face their own tropical threats in the coming months.