A husband rented a van, broke into a failing funeral parlour and stole his mother-in-law’s body to take to a different undertaker – all without telling his wife.

The unnamed man had not been able to get in contact with the undertaker, where his recently deceased mother-in-law’s body was being kept for several days.

Desperate to give her a proper send-off, he decided to rescue his dead mother-in-law from Butterfly Funeral Services in Rochester, Kent.

The frantic husband said he asked traders to act as look-outs as he used a doorway down an alleyway to break into Butterfly Funeral Services.

He loaded the corpse onto a trolley in broad daylight and wheeled it into a van before returning to pick up clothing his wife had set aside to dress her mother’s body for the funeral. 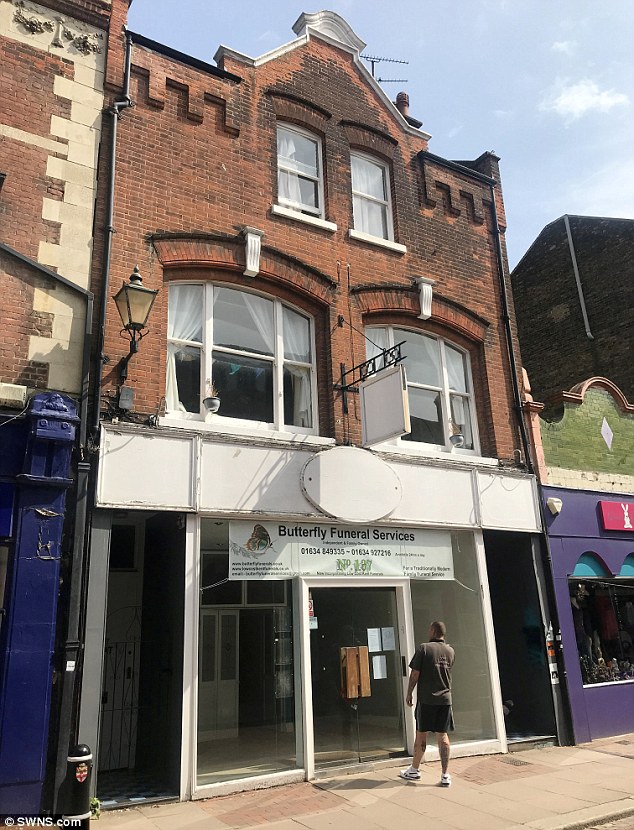 Desperate to give her a proper send-off, the man decided to rescue his dead mother-in-law from Butterfly Funeral Services in Rochester, Kent

The man said: ‘I had no option; I’d even spent two days at the police station trying to track the owner down, but I just couldn’t get hold of her.

‘I had to get the body out. I had taken on all of the organising and I didn’t want to bother my wife at this time.

‘She still to this day doesn’t know what happened and I won’t be telling her.’

The doting husband, who has asked not to be named, then took the body to another funeral director in Rochester, who has confirmed the story.

His actions, which took place a year ago, were revealed today as bailiffs repossessing the parlour discovered 16 full urns which had not been given to relatives.

Karen Calder, who owned the parlour, has also been banned from using the services at several crematoriums because of unpaid bills. 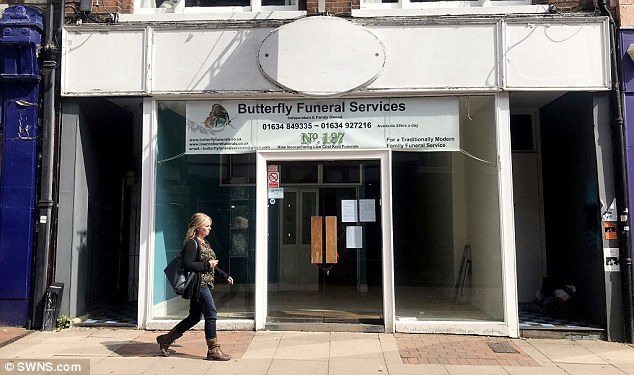 Enforcement agent Robert Hamshare was so appalled on finding the urns he tracked Ms Calder down to her home.

Mr Hamshare, whose duty it is to remove goods from premises, has notified Medway Crematorium and given Ms Calder an ultimatum to return the ashes to their rightful owners.

Leading Medway funeral director John Weir, who has four branches across the Towns, said: ‘The company involved were not subject to any regulatory inspection by either of the two professional organisations.

‘Had they have been, then issues of poor practice, such have been highlighted would not have occurred.’

Meanwhile, a handwritten note has been put in the shop window asking people to email if they want to collect the ashes. The man’s actions, which took place a year ago, were revealed today as bailiffs repossessing the parlour discovered 16 full urns which had not been given to relatives

Ms Calder said she had closed the parlour ‘due to ill health’.

She said: ‘I sincerely apologise if the families I have served have had difficulty in contacting me.’

Avalon, a company which specialises in pre-paid packages, sub-contracted the arrangements and ceremony to Butterfly, which set up in the town more than two years ago.

‘Butterfly’s have always provided a professional service for Avalon.

Janet Morville-Smith, head of risk and compliance, added: ‘While Avalon always put our customers and their families first, it would be unfair to discredit this funeral director due to unforeseen circumstances that befell her which were out of her control, given that her previous service to the industry has been professional and exceptional.’

Aside from burglary, it is not clear whether he committed any offences.