HMRC worker donates a kidney to his son, 26, after his wife was diagnosed with breast cancer before she could go through with the transplant

After watching her son Adam struggle with kidney failure for more than a decade, Mandy Rogers decided it was time to donate one of her own to ease his suffering.

But just weeks before the transplant operation, the businesswoman discovered a lump on one of her breasts and was diagnosed with cancer.

So rather than abandon the idea, her husband, Andy, stepped in to help their 26-year-old son instead.

‘I wanted to do it because I’m his mum,’ Mrs Rogers, 52, said. ‘My world just fell apart when the specialist broke the news that I had breast cancer.

‘I was totally focused on preparing for surgery so I could donate the kidney to Adam, so it was totally unexpected. I’d had a mammogram a year earlier which came back clear, but I still check myself every month and I felt a small lump in my left breast while I was in the bath. 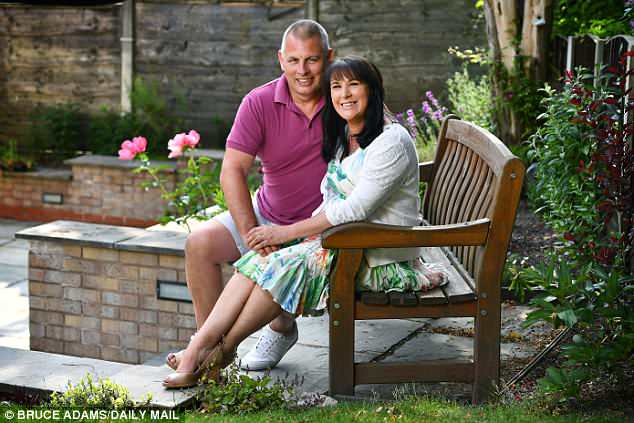 Mandy Rogers, 52, (pictured at her home in Whitefield, Greater Manchester) was due to donate a kidney to her son Adam, 26, but found out she had breast cancer two weeks before the operation. Her husband Andy (pictured) will now donate a kidney

‘My first thought was what if I hadn’t spotted it in time and the transplant had gone ahead? There’s a chance I might have passed cancer to him as well, which doesn’t bear thinking about.’

Adam has suffered from low kidney function since his mid-teens.

But although his condition causes tiredness and makes him susceptible to infections, it is not serious enough for him to be on the transplant register.

His parents and sister Jasmine, 25, were all matches, but Mrs Rogers, of Whitefield, Greater Manchester, was determined to give him one of her kidneys. She was preparing for surgery to have one of her own kidneys removed and transplanted into Adam when she received the bad news about her own health.

‘It was early in March last year that I found the lump. We were already booked in for the transplant to be done on March 31.

‘I thought it was probably a cyst but went to see my GP who said I could see a specialist in a couple of weeks. 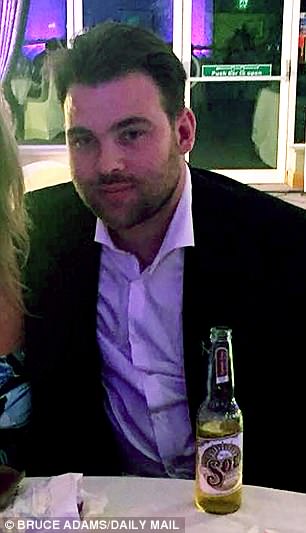 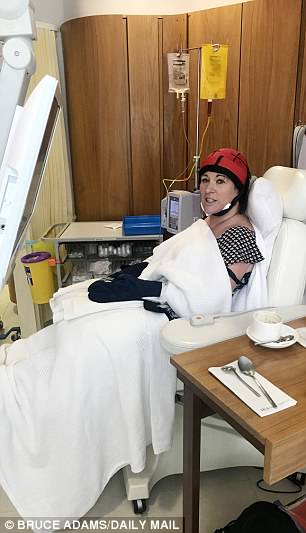 A year on, and Mrs Rogers (pictured right during her treatment at Christies Hospital in August 2017) is finally clear of cancer – as 54-year-old Mr Rogers, who works for the Inland Revenue, prepares to donate one of his kidneys to their oldest son (left)

‘I said, “I haven’t got two weeks”. Fortunately, we have private medical insurance so I booked to see a specialist on March 16, which was the day of my pre-med for the operation, and also my birthday. He agreed it was probably a cyst but sent me for a scan. Then, on March 23, a week before the surgery was planned, I was called to see him and he said, “I’m really sorry, but it’s cancer”. I just couldn’t believe it.’

After a lumpectomy, Mrs Rogers, who runs a kitchen and bedrooms firm, had chemotherapy and radiotherapy – and said she ‘sailed’ through the treatment. She added: ‘I even worked in between sessions. I got through it by eating lots of cake.’

A year on, and she is finally clear of cancer – as 54-year-old Mr Rogers, who works for the Inland Revenue, prepares to donate one of his kidneys to their oldest son.

His wife said: ‘It’s affected Adam for years, so we’re really hopeful that we can do something which will boost his quality of life.’

Mrs Rogers, who also has a 17-year-old so called Daniel, said: ‘I felt like such a failure that I couldn’t give Adam a kidney.’

There is a small risk of developing cancer from a donor organ. In 2010, two patients who received the kidneys of a woman who died of a brain haemorrhage developed cancer from her undiagnosed lymphoma.