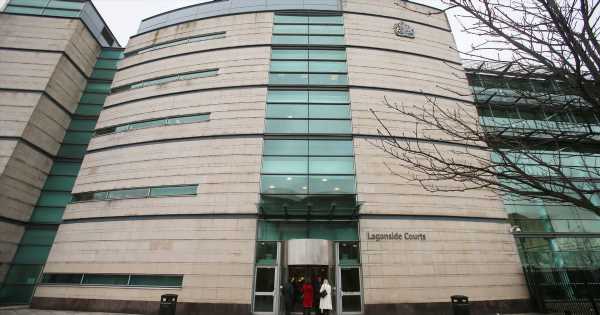 A ‘dying’ husband has been accused of stabbing his wife and battering her on the head with a lump hammer as she brought him a cup of tea.

George Anderson, a suspected cancer sufferer, is on trial for allegedly launching the attack in the couple’s bedroom in Belfast.

The court heard that once the apparent beating was finished, he drove himself to a PSNI station and declared: “She's lucky I didn't do her right."

The 60-year-old, of Lyndhurst Parade in Belfast, faces charges of attempted murder, wounding with intent to do grievous bodily harm and possession of offensive weapons, Belfast Live reported.

Police scrambled to their home address on Wednesday and found the unnamed wife getting first aid treatment from a neighbour.

A detective told Belfast Magistrates' Court today: "She said (Anderson) had been sitting on the edge of the bed, and as she was bringing him a cup of tea he got up and hit her with a lump hammer to the top of the head."

It was alleged that she grabbed his arm, but he produced a knife held in the other hand and stabbed her to the back of the head.

She managed to exit the bedroom and escape from the house, shouting for help in the street outside, according to police. Meanwhile, Anderson was arrested after he arrived at a nearby PSNI Station.

He told an officer at the front gates that he only had a few weeks to live due to cancer and had just stabbed his wife because she was having an affair, the court heard.

Police stressed there is absolutely nothing to support any claims of infidelity. On being cautioned he allegedly responded: "She's lucky I didn't do her right."

The detective said Anderson further stated: "It doesn't matter, I'm dying anyway. I was wanting to do her in the neck, she's lucky she's f****** living, I'll tell you that. She was lucky she got down them stairs."

According to reports, Anderson has lost five stone in eight and was too weak to prevent his wife from escaping.

She was taken to the Royal Victoria Hospital where she was treated for a head wounds.

Opposing bail, the detective contended: "This was an unprovoked, premeditated attack involving weapons.

Defence solicitor Paul Dougan argued that the alleged attack was completely out of character.

The couple have enjoyed a happy, 35-year marriage with no previous allegations of violence, he told the court.

Issues were raised about his client's mental and physical health, with a medical appointment due next week to confirm the suspected cancer diagnosis.

Refusing bail, however, District Judge George Conner ruled: "At this stage there is too high a risk of further offences."

Anderson was remanded in custody to appear again on January 7.