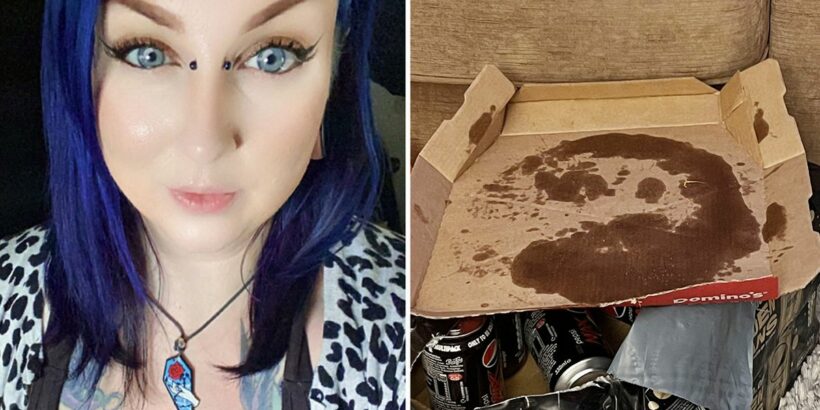 A pizza-loving Mum has found Jesus’ likeness in her Domino’s box but she is still no closer to finding God.

Kim Ellis, a 33-year-old retail employee, found a grease mark that looked just like the prophet as she finished chomping down on her pie.

Thanks to the work of a medium meat feast, the grease from the takeaway treat made a circular head shape complete with two eyes and Jesus’s trademark beard.

Not a believer in God herself Kim, of Penzance, Cornwall, took the snap on January 2 to show her fella.

The pair had a laugh over “Pizza Jesus” – but a snap of the box has raked in the likes online.

Discussing the surprise outcome of her £39.66 online order, the mum of two said: "My partner finished his first and popped the box down on top of the Pepsi cans.

"I was still eating mine. I just looked up and noticed a little face looking back at me and thought it was funny, that's when I snapped the picture.

"My first thought was Jesus because of the flowing hair and beard.

"He was actually out of the room when I spotted it, I mentioned it when he came back in. He said 'it's pizza Jesus'."

Posting it online, she said: "I thought I'd share this one and see what other people saw.

"Most people have found it funny, there's been lots of comments about who other people see too. It's always nice to make people laugh.

"It didn't make me consider taking up Christianity, I think it'll take more than a greasy pizza box."

Others are less certain that it is Jesus staring back at them in the image, with some claiming to have seen the likes of John Lennon, Harry Potter character Hagrid, and Jerry Garcia.