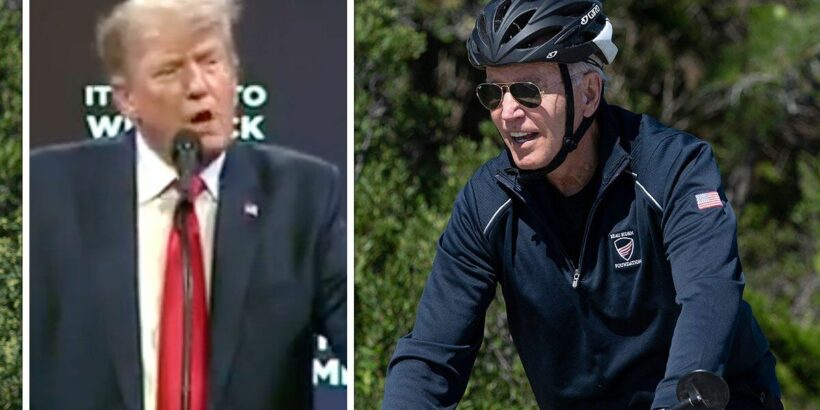 Joe Biden was delivered yet another blow after he fell off his bicycle, as Donald Trump hit out at him during a Republican conference in Nashville. The American President took a tumble close to his Delaware beach home where he and his wife, Dr Jill Biden, were celebrating their 45th wedding anniversary. The 79-year-old President tipped over when he braked to speak to people wishing him a Happy Father’s Day. He reportedly could not release his bike shoes from the toe cages on the pedals, prompting him to collapse.

Speaking at a Republican conference, Donald Trump slammed the accident under his supporters’ laughter: “I hope he has recovered. Because as you know, he fell off his bicycle today.”

He doubled down: “No, I’m serious. I hope he’s okay. Fell off a bicycle…

“I make this pledge to you today that I will never ever ride a bicycle,” he said under renewed laughter from the crowd.

Turning to Joe Biden’s presidency, he lashed out: “It’s a disgrace. What they’re doing to our country? But we can erase the calamities of the Biden years. All it takes is a House, a Senate, and a President who will put America first.”

“One of the greatest travesties of us is to see a person in the White House who even after years of political experience has absolutely no clue how to be the President of the United States”, Mr Trump said.

Donald Trump gave that address at the Faith and Freedom Coalition’s “Road to Majority” Conference ahead of the November midterms.

The Faith and Freedom Coalition, an evangelical non-profit organisation, along with Republicans have their eyes set on Congress, as they hope they can win it back after Democrats gained full control of both Houses and the White House.

According to the FiveThirtyEight’s polls aggregator, Republicans are polling slightly ahead of Democrats by a margin of 2 percent in terms of favourability ahead of the November 8 election day.

However, according to a Gallup analysis, Democrats face a stiff battle ahead.

“The party of the president typically loses US House of Representatives seats in midterm elections – an average of 23 since 1974. However, 2022 is not shaping up to be an average year,” the analysis reads based on four indicators: presidential approval rating; approval rating for the job Congress is doing; general satisfaction with the state of things in the US; and the perception (positive or negative) of the current economic conditions in America.

This comes as President Biden is facing an unprecedented set of challenges like spiking inflation, the Ukraine war, the persisting coronavirus, pandemic, the Supreme Court’s upcoming ruling on abortion rights, and gun violence among others.

In a repeat of previous elections, fears are now mounting around how Russia could exploit political polarisation to stir up more distrust in the upcoming elections.

“If something small happens, it will feed into the mania and chaos, and all of a sudden people will think all the elections are completely insecure,” a national security official told CNN.

A security report read by CNN warned that Russia will “likely” try to discourage voting and “probably” attempt to undermine the November midterms in retaliation to the US-led sanctions on Russia.

“We expect Russian interference in the upcoming 2022 midterm elections, as Russia views this activity as an equitable response to perceived actions by Washington and an opportunity to both undermine US global standing and influence US decision-making,” says the report, titled “Key Threats to the Homeland Through 2022.”