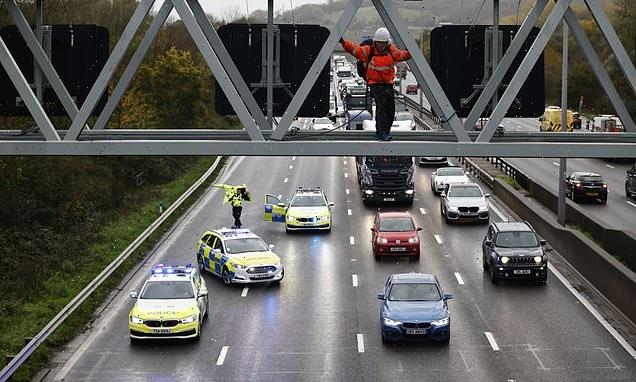 Nurses, commuters, hauliers and hospital patients hit out at Just Stop Oil protesters who defied a court injunction and climbed on gantries above the M25 yesterday, causing a second day of tailbacks.

At least 16 were arrested across Essex, Hertfordshire, Kent and Surrey on the country’s busiest motorway as the protesters repeated the action they took on Monday.

Tony Bambury, of Aylesbury in Buckinghamshire, who missed his father’s funeral, said he had ‘nothing but contempt’ for every one of the protesters.

But the brazen group warned of more to come, despite a High Court injunction designed to bar them from the M25. 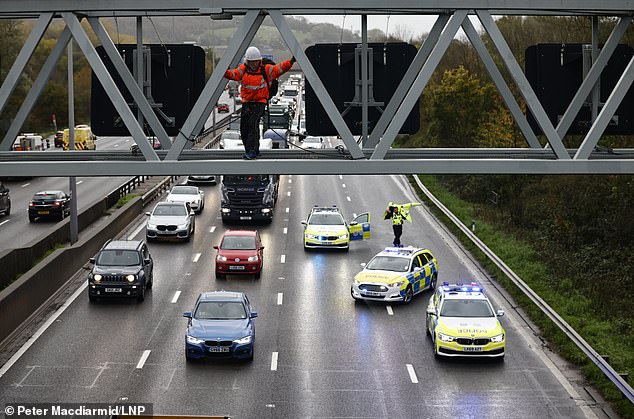 But former Conservative leader Sir Iain Duncan Smith said injunctions were not proving a deterrent and called on police to issue on-the-spot fines instead. He said: ‘The one thing that gets through is if you start fining people £1,000.’

In total, 11 M25 junctions were hit at just after 7am. Most were reopened by lunchtime.

Mr Bambury who had tried to get to his father’s funeral in Pitsea, Essex, on Monday, said in a passionate message to the protesters on BBC Three Counties Radio: ‘What you have done to me will be staying with me forever.

‘You selfish, selfish people… I have nothing but contempt for every single one of you.’ A Just Stop Oil spokesman tried to say he was ‘really sorry’, but Mr Bambury told him: ‘You can take your apology and shove it where the sun does not shine.’

One medic, called Lauren, wrote on Twitter: ‘Been on a 12-hour night shift in A&E, haven’t slept in 16 hours and now having to wait on the M25 because of Just Stop Oil. Will you also take responsibility if I crash from exhaustion?’ Broadcaster James Whale said he missed a cancer check-up because of the ‘f*** wits on the M25’. 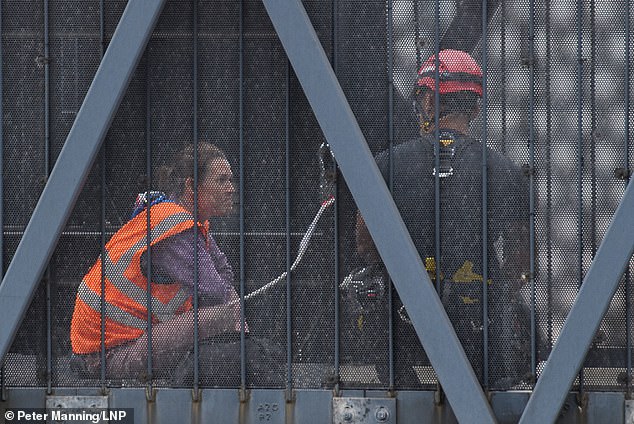 Paul Mummery from the Road Haulage Association said disrupting transport will push up the price of goods in shops.

Seasoned protester Edred Whittingham, 25, was among those bringing misery to the motorway. The well-spoken student who studied at Exeter University, said it was up to ‘everyday people’ to fix British politics.

A Just Stop Oil spokesman said: ‘This is not a one-day event, expect us every day and anywhere.’

In her podcast The News Agents, the ex-Newsnight host rejected a claim by fellow former BBC journalist Jon Sopel that Just Stop Oil were ‘grandstanding’ with ‘extreme’ protests.

She said: ‘One person’s grandstanding is another person’s civil rights action.

However, climate activists condemn flying as damaging to the planet.