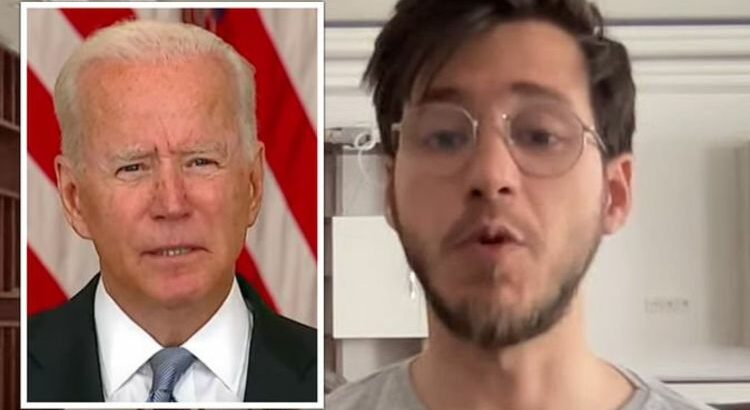 Joe Biden speech 'a punch in the gut' says Baheer

Joe Biden has been at the centre of savage criticism over his decision to proceed with the withdrawal of US troops from Afghanistan despite the looming Taliban threat. The backlash towards the US President has intensified since Kabul once again fell into the hands of the insurgents on Sunday. Obaidullah Baheer, a lecturer at the American University of Afghanistan, reacted with fury at Mr Biden’s Monday speech in which the US leader insisted he did not regret his decision to quit the Middle Eastern country.

“Look at President Biden, what he says right now. What I heard in his speech was ‘I’ll punch you in the gut then I will tell you the amazing things I did after punching you.’

“The way the United States played out this withdrawal, his red herrings, his misdirecting the population, telling them withdrawal was a necessity – no one questioned the necessity of the withdrawal.

“It was the way it was conducted that had to be talked about and that’s something he’s ignoring. Where is the sense of responsibility towards the Afghan people?”

He continued: “You can’t say you weren’t here for nation-building but there was a vision of the world that Afghans developped.

“And rather than deserting the Afghans and leaving the common people to negotiate with the Taliban, why didn’t the Government, why didn’t the Americans or the international community take that responsibility and try to reconcile that vision of the world?

“They’ve left us to ourselves and we have to do all this alone.

“And I don’t think the Afghan people who stood by the project for 20 years deserve this.”

In his speech on Monday, President Biden insisted he had to decide between asking US forces to fight endlessly in what he called Afghanistan’s civil war or follow through on an agreement to withdraw negotiated by his predecessor Donald Trump

He said: “I stand squarely behind my decision.

“After 20 years I’ve learned the hard way that there was never a good time to withdraw US forces.

“That’s why we’re still there.”

Mr Biden acknowledged that the Taliban’s speed in retaking the country was unexpected.

The rapid advance stunned American officials who predicted that the Afghan army would either repel the militants or hold them off for months.

He also doled out criticism to his Republican predecessor, Trump, whose administration negotiated a deal with the Taliban that Biden said left the group “in the strongest position militarily since 2001.”

Critics of the US President have focused on the way the US withdrawal has been carried out so far, as video showed Afghans flooding runways at the Kabul airport and desperately trying to grab the fuselage of a US plane rolling on the tarmac.

“The president’s failure to acknowledge his disastrous withdrawal provides no comfort to Americans or our Afghan partners whose lives hang in the balance,” Republican Senator Mitt Romney said in a tweet.