A former Olympic-standard showjumper who smeared insults in pig’s blood on the walls of her Tory Lord lover’s £1million flat after catching him in the arms of another peer’s wife spoke out last night after avoiding jail for the attack.

Scorned Lizzie Purbrick, 63, drew a three-foot penis in blood on the floor of the home she had shared with Lord Prior of Brampton, and daubed ‘lady sl*t’ and ‘big d**k lord’ on his walls.

She admitted causing criminal damage at the 63-year-old peer’s south London flat at Camberwell Green Magistrates’ Court yesterday before launching into a bizarre defence of herself on the steps of court.

After praising the ‘very nice judge’ who led her walk free, Purbrick said: ‘Everything starts in Norfolk.

‘It is a hotbed of sex. I am a very, very well-bred toff, I was born and bred in Norfolk. So many people have said I should write my life story but I am so bonkers I can’t remember it.’

Asked who the love rival is who she found Lord Prior cheating on her with, she told reporters the woman had a ‘delicious’ husband, also a member of the House of Lords, who had been ‘woefully wronged’.

Camberwell Magistrates had heard Purbrick wrecked Mr Prior’s apartment, tore clothes from cupboards and stuck ripped fabric to the wall in the shape of a cross which appear a part of her vandalisation, before using several pints of blood and a garden sprayer to douse the room in red.

Purbrick, who was part of the Equestrian team for the 1980 Moscow Olympics, then left a cheque for £1,000 to Mr Prior labelled ‘payment for the bull’. Prior is said to have billed her £15,000 for damages, which she has not paid. 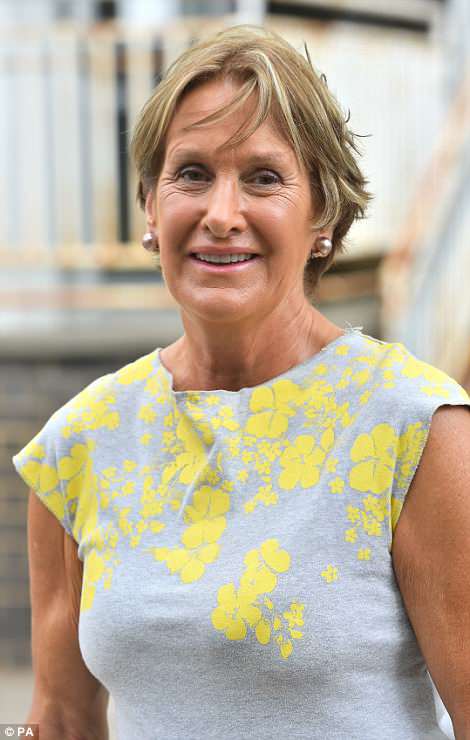 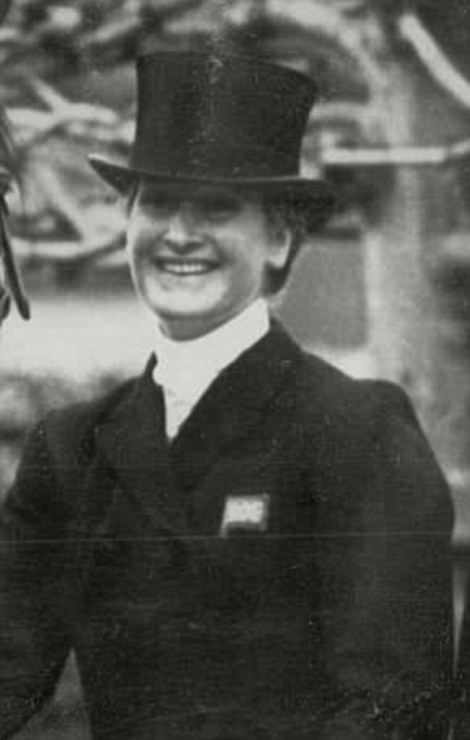 Purbrick (left, outside court, and right, at the 1980 Olympics) admitted causing criminal damage at the 63-year-old’s south London flat 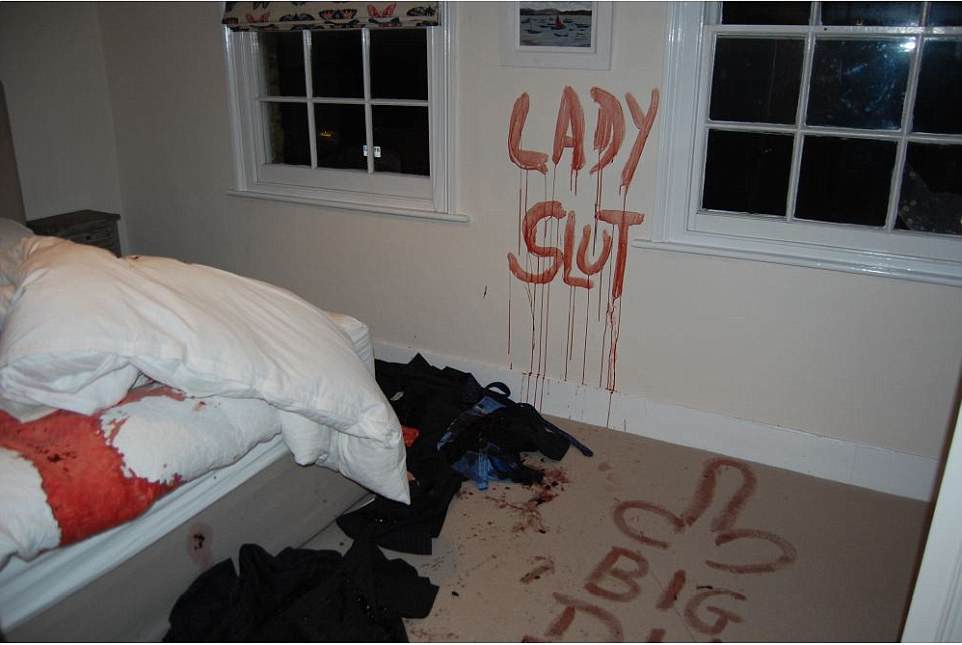 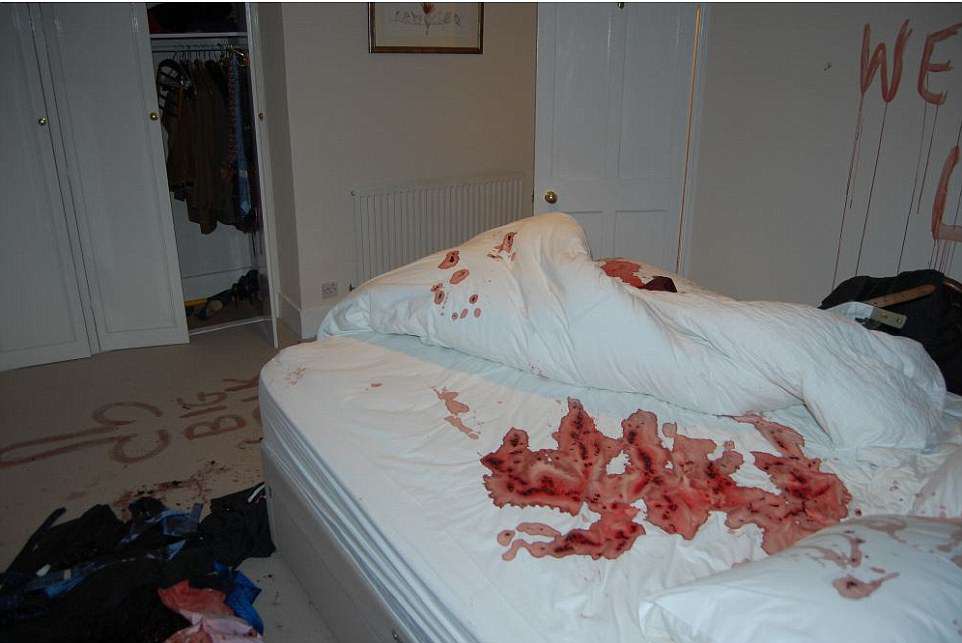 Lizzie Purbrick, 63, also drew a three-foot penis on the floor amid allegations David Prior was sleeping with a woman married to another member of the House of Lords. The scorned woman wrecked Mr Prior’s apartment, tore clothes from cupboards and stuck ripped fabric to the wall in the shape of a cross before using several pints of blood and a garden sprayer to douse the room in red 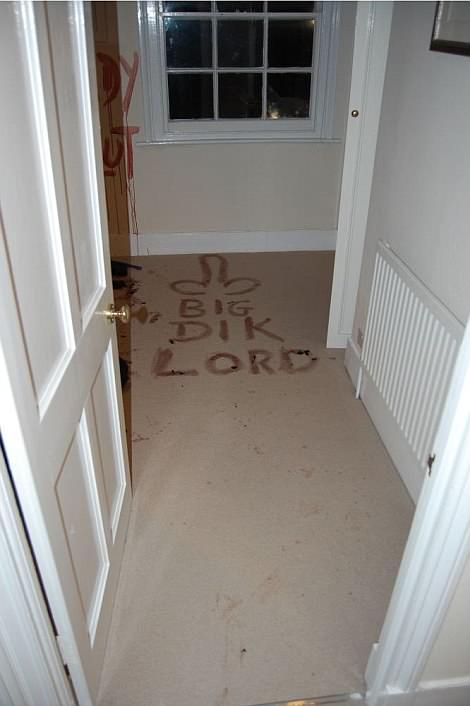 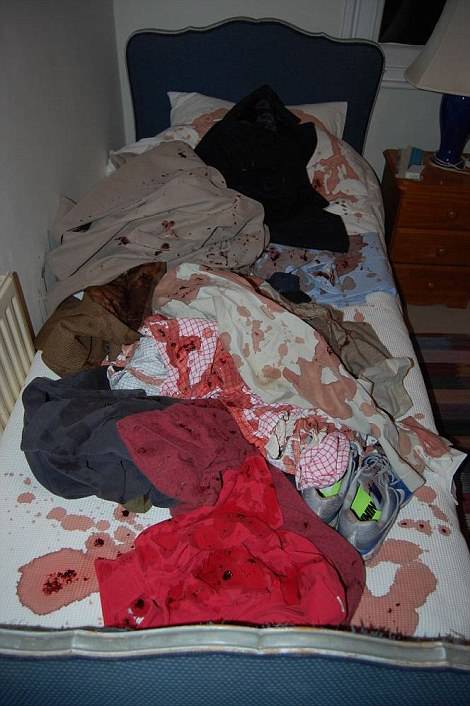 The damage was only discovered when alarmed neighbours spotted the blood seeping under the front door to the flat into the street. Pools of blood were left to dry on the single bed inside the Tory peer’s London apartment 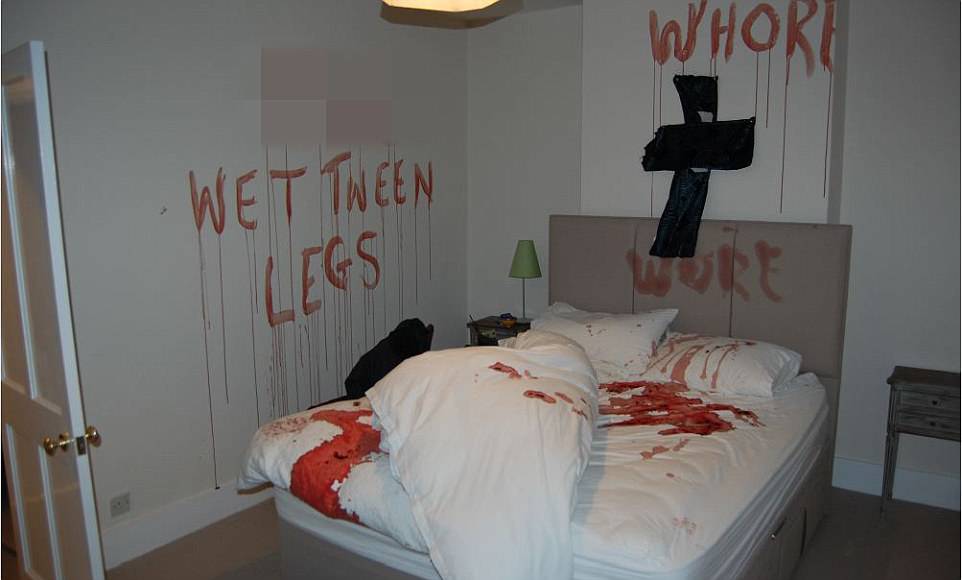 Simon Nicholls, defending, said the incident was ‘out of character’ for his client, who was left reeling when her two-year long relationship with Lord Prior came to an end. Pictures show how Purbrick made two attempts at the word ‘wh*re’ after misspelling the first

The damage was only discovered when alarmed neighbours spotted the blood seeping under the front door to the flat into the street.

The court heard she had been in a relationship with former MP and Tory peer Lord Prior for around two years, having met at a dinner party at Swannington Manner – Prior’s stately home – and both were estranged from their partners.

Prosecutor Alex Du Sautoy said: ‘The background of this offence is that Miss Purbrick is a former partner of the complainant David Prior.

‘On Wednesday 9 May this year around 5.30pm Ms Purbrick attended Mr Prior’s apartment using a key she still had from the relationship. 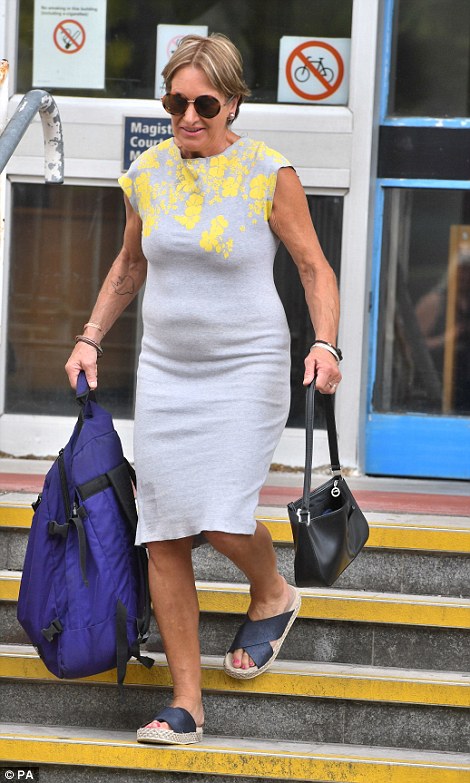 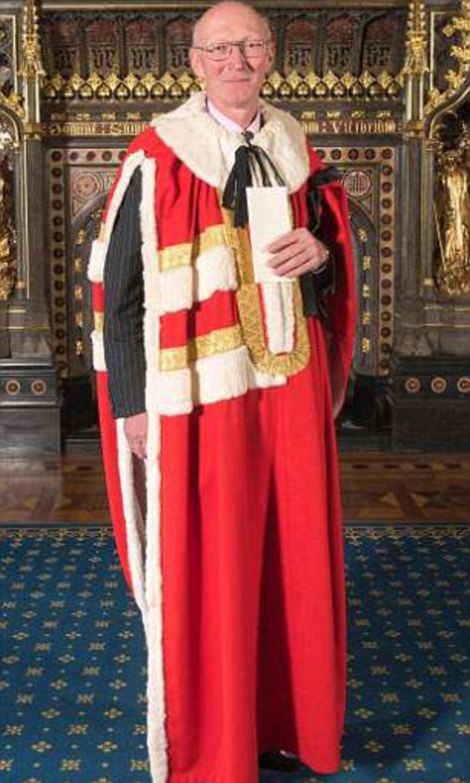 ‘She had on her several pints of pigs blood that she had bought from a butcher and a garden sprayer.

‘She also drew a penis on the floor with blood.

‘She also sprayed some blood on a suitcase and some bed linen. She left a cheque for £1,000 to Mr Prior labelled ‘payment for the bull’.

‘She then dropped the remainder of the blood on the floor.’

The prosecutor said neighbours were alarmed when they saw red liquid spilling out from the front door out into the street and called the police.

Mr Du Sautoy said: ‘One of Mr Prior’s neighbours called the police and at 11pm Mr Prior returned to his apartment to see the blood in the apartment and on the floor.

‘One of the neighbours saw someone enter the flat who they believed to be a male and loud music was playing and at 7.30pm noticed a red liquid that came from under the door onto the pavement.

Simon Nicholls, defending, said the incident was ‘out of character’ for his client, who was left reeling when her two-year long relationship with Lord Prior came to an end.

He said. ‘It finally comes to an end, to put this delicately, when she discovers him in the arms of another woman who is married to another member of the House of Lords.’

Mr Nicholls also said Purbrick’s brother had been diagnosed with terminal cancer at the time and had sadly ended his own life just three days ago. She is now living in a caravan, he explained.

He continued: ‘The fact that at 63 she was an absolutely impeccable character with no antecedent history whatsoever, she goes to a police station and at the first opportunity admits immediately to police the damage that she had done.

‘She has identified the relationship is over. The whole incident with the damage to the flat – she describes it in a way that was ‘cathartic’ and she has moved on. 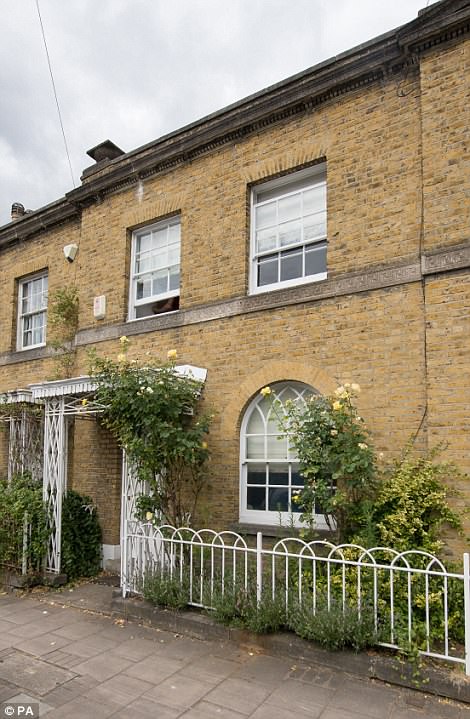 ‘She is someone who had been emotionally vulnerable at a time when both the break up of a relationship which she thought had longevity and the unfortunate problem with her brother dying, she acted in the way she did.’

Purbrick, of Westacre, Kingsley, admitted one count of criminal damage.

She was ordered to complete 120 hours unpaid work and banned from contacting the Tory peer.

District Judge Susan Green said: ‘Lord Prior came home to police in attendance at his flat.

‘A neighbour was unsure if the red liquid was blood or juice and police rightly forced entry, fearful of what they might find.

‘What they did find was a very large amount of blood over the floors and walls in various locations.

‘There were a series of highly abusive slogans on the wall and floor that were clearly derogatory to Lord Prior and his new partner.

‘They were, in my view, quite appalling.

‘This was a completely disproportionate response to the breakdown of the relationship.

‘I do not accept for a moment that this was spontaneous – this was planned and premeditated.’

Purbrick was ordered to complete 120 hours unpaid work and pay £85 in costs.

The judge also made a restraining order banning her from contacting the Tory peer or going to three properties in London and Norfolk.

Lord Prior — the son of James Prior, Northern Ireland secretary in the Thatcher government — married his wife, Caroline, on Valentine’s Day in 1987 and they have two children.

Colonel Purbrick said: ‘She may be what she calls estranged but she is the mother of my children – I’m sorry she got herself into the shit. I hope she gets out of it.’