The chilling reality of Wild West UK: Shock figures reveal violent crime up 50% in parts of Britain and an image of a machete wielding thug sums up the country’s crime wave

The swaggering criminal forced staff at a shop in Bury to hand over the takings before fleeing with an accomplice.

The shocking image emerged last night as official figures revealed that violent crime is up in 42 of 43 police force areas – in some by more than 50 per cent.

As calls were made for ministers and police chiefs to get a grip:

The crime wave was brought into sharp focus on Tuesday by a series of moped raids across London.

These muggings followed a string of other shocking incidents in the capital, which has seen more than 70 killings this year already. And yesterday analysis of regional ONS figures suggested the crime wave is now a national issue. 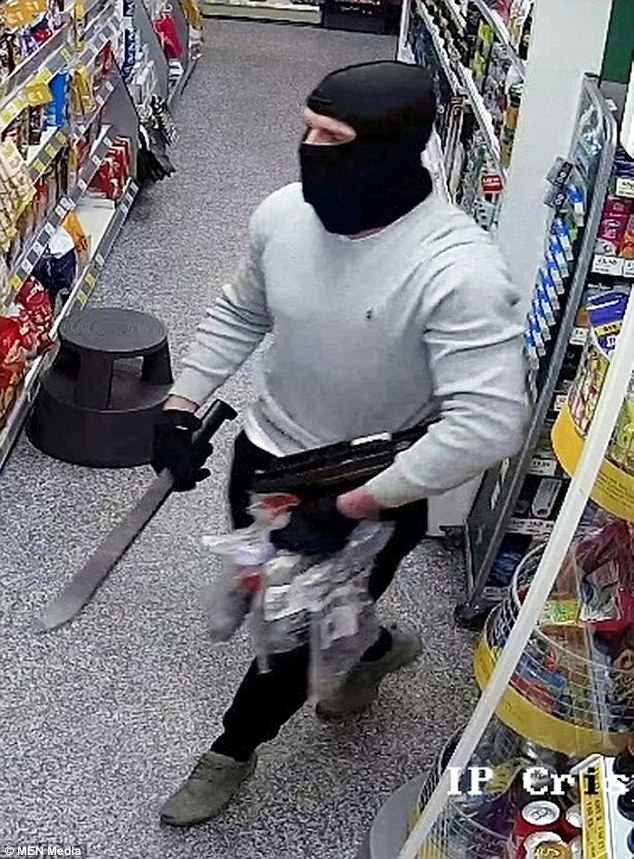 Brandishing a foot-long machete, this masked thief and an accomplice terrorised staff at a grocery store

Greater Manchester Police and South Yorkshire saw violence go up by 53 and 57 per cent respectively. But the biggest surge – of 58 per cent – was in Durham.

A record 1.3million offences of violence against the person were logged last year, the highest number since records began 15 years ago and up 21 per cent on the previous 12 months.

Yet separate figures from the Home Office show that detection rates have plummeted. Only 13 per cent of offences of violence last year were solved – compared with 23 per cent in 2014.

Just over one in eight robbers were caught compared with 19 per cent in 2014. And in the 12 months to last September, 78 per cent of burglary investigations were closed without a suspect being identified.

Yesterday Scotland Yard published figures showing that only one in ten knife robberies, and fewer than a quarter of violent crimes involving a bladed weapon, were solved last year.

Louise Haigh, Labour crime spokesman, said: ‘Threatened by overwhelming demand and shorn of the numbers they need to keep communities safe, the police have reached a tipping point where tackling surging levels of serious crime is becoming almost unmanageable. The Government must act to end the crisis they have created.’

Yvette Cooper, the Labour MP who chairs the Commons home affairs committee, said: ‘We need urgent action before it gets worse.’

A Home Office spokesman insisted the challenges ‘had been reflected in the most recent police funding settlement’.

Brandishing a foot-long machete, this masked thief and an accomplice terrorised staff at a grocery store.

The raiders, wearing black balaclavas and gloves, forced workers at a One Stop Shop to hand over cash from the shop safe and till, before stealing cigarettes and fleeing on foot.

Police yesterday released CCTV images of the terrifying raid, which occurred shortly before 11pm on April 19 in Bury, Greater Manchester.

Detective Constable Gordon Milne, of Greater Manchester Police, said: ‘This was a distressing incident that left innocent staff members fearing for their safety. We would urge anyone who recognises the offenders, or has any information, to contact police immediately.’ 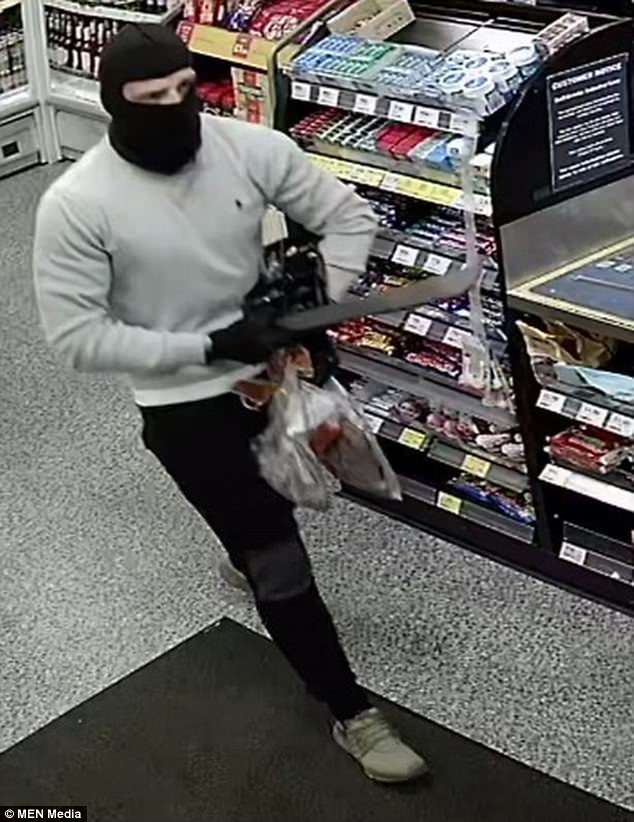 Police yesterday released CCTV images of the terrifying raid, which occurred shortly before 11pm on April 19 in Bury, Greater Manchester

It is thought a grey-silver or light blue Fiat Punto the thugs used was abandoned nearby.

Design engineer James Harker, 32, spent a night in hospital after being stabbed by a gang who tried to steal his phone last week.

Mr Harker was walking home following a night out when he was attacked by three men in Hazel Grove, Greater Manchester, at around 11.30pm.

When he refused to hand over his phone he was stabbed in the back but he escaped serious injury thanks to a leather jacket he was wearing.

Armed to the teeth with axes, knives and hammers, two gangs of youths clashed outside a primary school as children were leaving.

Shocked parents were collecting their youngsters when they saw the fracas in Whitchurch, Cardiff. A boy of 14 was found hiding in a neighbour’s garden after being chased by blade-wielding teens. 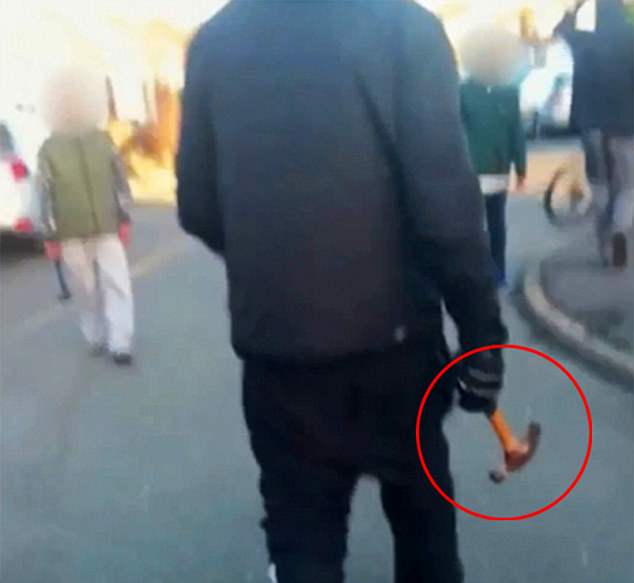 Shocked parents were collecting their youngsters when they saw the fracas in Whitchurch, Cardiff

One witness reported seeing about 20 pupils running past his home and later found a discarded axe on his roof. The fracas was caught on camera by a pupil with their mobile phone.

Karen Bryant, who was picking up her daughter from primary school, gave a victim impact statement to Cardiff Crown Court saying: ‘This type of aggression must be stopped otherwise someone will be hurt or even killed.’

Two 18-year-olds – Adam Awan and Anthony O’Driscoll – admitted affray and were given nine months and eight months respectively in a young offender institution.

TV crew’s £15k camera is stolen on the street

Thieves stole a £15,000 camera from an Australian TV crew moments after they had finished a live broadcast in a London street.

The brazen robbery took place at 10pm on Tuesday, after reporter Laurel Irving had completed a live appearance on the Sunrise breakfast programme on Channel Seven in Australia.

Miss Irving was completing her report on Britain’s the Royal family when two masked men approached her and her cameraman, Jimmy Cannon, as they filmed in Islington, north London. 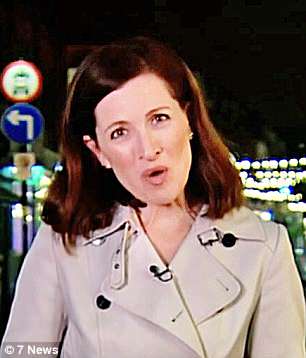 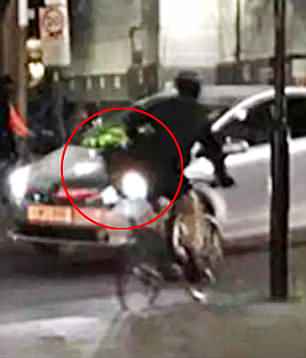 Chilling: Reporter Laurel Irving, left, was robbed as a broadcast ended. Right, a thief flees with the camera, circled

Yesterday she told of the moment the pair approached and said she noticed they were masked. Miss Irving said: ‘I kept working and ignored them … while that was happening one of them walked up to Jimmy my cameraman and started talking to him.

‘All of a sudden Jimmy took the camera off the tripod, which is when I stepped in … Jimmy said, “No, stay back Laurel,” and was giving the camera to a guy in a balaclava.

‘He knew what was about to happen, you couldn’t stop it at that point.’

This is the terrifying moment knife-wielding muggers on a moped forced Michael McIntyre, circled, to hand over his Rolex as he picked up his ten-year-old son Oscar up from school.

But despite his ordeal on Monday, the comedian appeared to be back on form yesterday as he joked that he had plans to replace his £15,000 watch to ensure he arrives at his next gig on time. 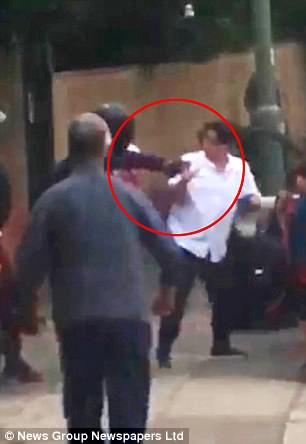 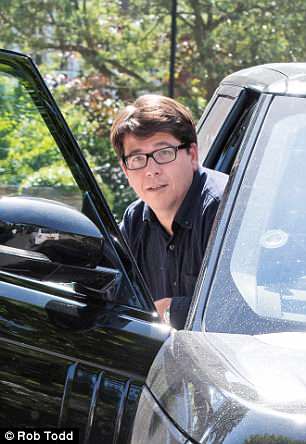 This is the terrifying moment knife-wielding muggers on a moped forced Michael McIntyre, circled, to hand over his Rolex as he picked up his ten-year-old son Oscar up from school

McIntyre, 42, was pictured yesterday, above right, outside his £5.7million mansion in Hampstead, North London, and said he was ‘feeling better’ after the attack in which two robbers smashed the window of his Range Rover, then robbed him at knifepoint.

Asked about the show he is due to do in Dublin tonight, he said: ‘I’m not sure if I’m going to arrive there on time, but I’m going to get a new watch later.’