Britain will lose FOUR YEARS of economic growth if the country crashes out of the EU with a no deal Brexit, IMF warns

Britain will lose four years of economic growth if it crashes out of the EU without a deal, the International Monetary Fund (IMF) today warned.

The global research institute said a no deal Brexit would cost the UK around 6 per cent of gross domestic product (GDP) compared with staying in the bloc.

But securing a trade deal with Brussels would roughly halve the damage to the British economy to 3 per cent, the IMF said.

The stark warning – laid out in a 91 page wide-ranging assessment of the UK’s economic prospects – comes as Theresa May is in the political fight of her life to get her Brexit deal approved.

She is holding a crunch Cabinet meeting this afternoon and will address the nation later as she scrambles to get her plan through amid furious criticism. 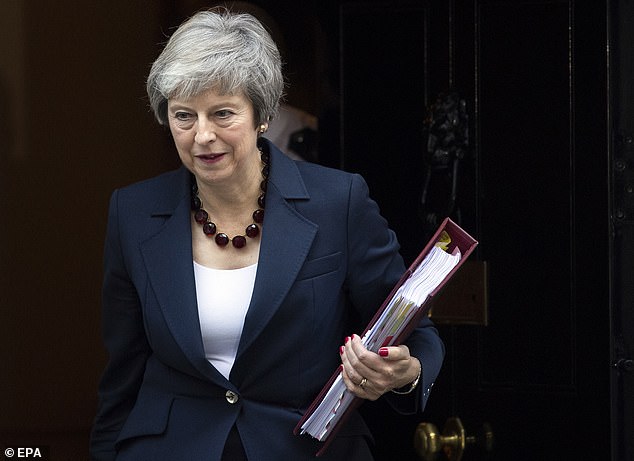 Britain will lose four years of economic growth if it crashes out of the EU without a deal, the International Monetary Fund (IMF) today warned. Theresa May (pictured leaving No 10 today) is facing the political battle of her life to get her Brexit deal backed by ministers and MPs

The IMF said: ‘Directors emphasised the importance of a timely agreement with the EU, accompanied by an implementation period to avoid a cliff-edge exit in March 2019 and to allow firms and workers time to adjust to the new relationship.

‘An agreement that minimises barriers to trade in goods and services would best support economic activity and limit disruptions and global spillovers.

‘Nevertheless, preparations should continue for all possible scenarios.’

After over a year of painstaking negotiations and wrangling, Mrs May has finally thrashed out a Brexit deal with Brussels.

But furious Brexiteers took aim at the plan almost immediately when details began to leak out last night – branding it a betrayal and warning the PM’s days are ‘numbered’ if she sticks with it.

It includes plans for a backstop which will keep the UK in a temporary customs union with the EU, and accepts deeper regulatory checks will be needed in Northern Ireland.

The leaks sparked cries of betrayal from Brexiteers and the DUP – who prop the Tories up in No10.

They say it will drive a wedge between Northern Ireland and the rest of the UK, while keeping Britain locked to Brussels with the EU holding the keys.

Many ardent Tory Brexiteers have called for a ‘clean’ exit and said that cutting all ties with the bloc and trading on World Trade Organisation terms (WTO) would be better. 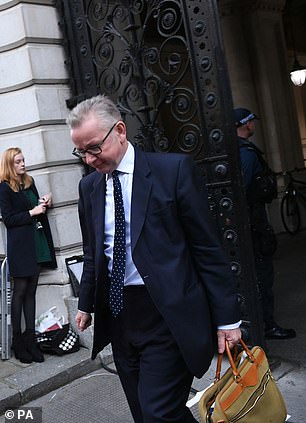 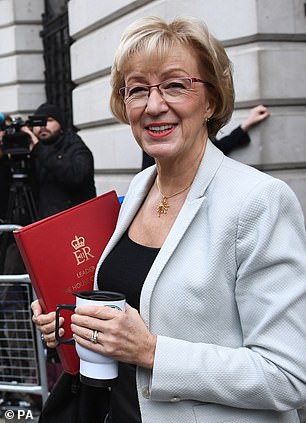 Environment Secretary Michael Gove (left) is said to be ‘tense’, while Commons Leader Andrea Leadsom has deep misgivings about some of the compromises in negotiations with Brussels 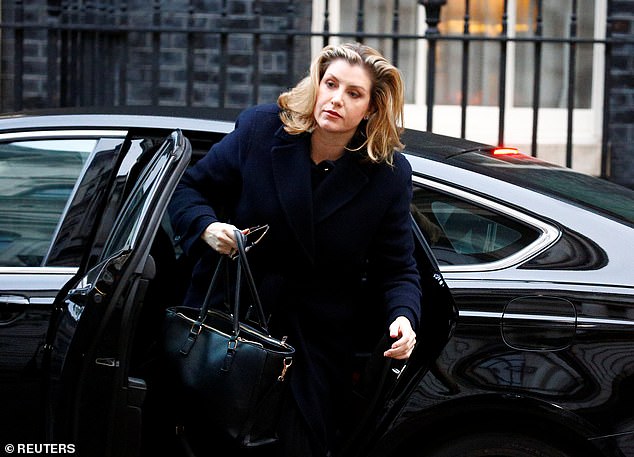 Aid Secretary Penny Mordaunt was summoned to Downing Street for pre-Cabinet talks this morning, amid rumours she is considering quitting. And she was one of the first to arrive for the Cabinet meeting this afternoon

But the IMF’s assessment warns that this would cause a massive shock to Britain’s economy.

The report states: ‘In a scenario in which the UK and EU trade under World Trade Organisation rules the level of output is likely to fall by between about 5 and 8 percent relative to a no-Brexit scenario, with an average of about 6 per cent.’

Mrs May is battling to get a Brexit transitional deal which will preserve free trade in goods, though not services, while placing controls on immigration from the EU.

The IMF said this type of free trade agreement would reduce British GDP by around 3 per cent compared with staying in the EU.

The effect of Brexit would vary widely between industries, the IMF said.

Britain’s financial services, chemicals and automotive industries were likely to suffer most from new regulatory barriers and disrupted supply chains.

By contrast, farms, food processors and oil and mining companies might do better.

Government programmes would be needed to retrain British workers for these jobs, the IMF added.