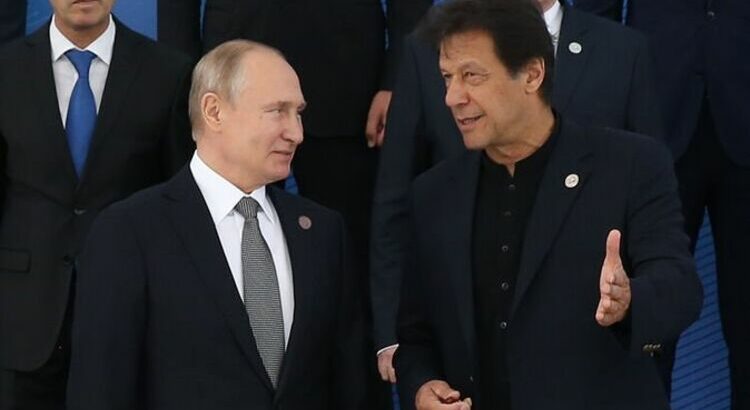 He spoke at a meeting of foreign ministers at the Organisation of Islamic Cooperation, which also hosted Chinese Foreign Minister Wany Yi. China, a close ally of Pakistan, has previously called for negotiations between the warring sides to resolve the conflict.

Negotiations between Russian and Ukrainian delegations in Belarus have so far yielded no results.

Previous localised ceasefires, in places such as the decimated port city of Mariupol, have been short-lived even for humanitarian efforts.

Mr Khan told foreign ministers that “we should think about how … we can mediate, how we can bring about the ceasefire.”

He added: “I want to discuss how, maybe OIC along with China, we can all step in and try to stop this conflict which is going to have, if it keeps going the way it is, it would have great consequences for the rest of the world.”

Mr Khan’s remarks come just hours after China and Pakistan voiced their concerns about the “spill-over effects of unilateral sanctions” on Russia.

The Chinese foreign minister had met with his Pakistani counterpart on Monday night, ahead of the OIC conference.

China has so far trod a careful diplomatic line, not siding with an ally and large trading partner or the West over the conflict.

Russia’s exports to China make up a large portion of its economy, accounting for 18 percent of its total exports, or nearly $147bn (£110bn) last year. Chinese arms purchases also make up 21 percent of Russian exports.

However, Western nations comprise the vast majority of China’s customers, and so Mr Wang has previously expressed “regret” for the loss of life in Ukraine without condemning the war.

China has also grown closer to Ukraine in recent years, and had enlisted the country into its soft power “belt and road” infrastructure initiative.

Trade between Russia and Pakistan is relatively small, but Mr Khan has struck a natural gas supply agreement with Russia, which he signed a week after the invasion of Ukraine had begun.

Pakistan has also conveyed its concern about the repercussions of the invasion but stopped short of condemning it.

There are fears that the crippling economic sanctions placed on Russia by the West – including the removal of banks from the SWIFT financial communications service and the freezing of key assets – will have a knock-on effect on countries who rely on Russia for trade.

In the immediate aftermath of the invasion, China was one of three countries on the UN Security Council to abstain on a resolution condemning Russia’s invasion.

While it did not vote to denounce the military action, it did not veto the motion as Russia did.

When the issue was put to the UN General Assembly, both China and Pakistan were among the 35 countries that abstained from condemning the attack.