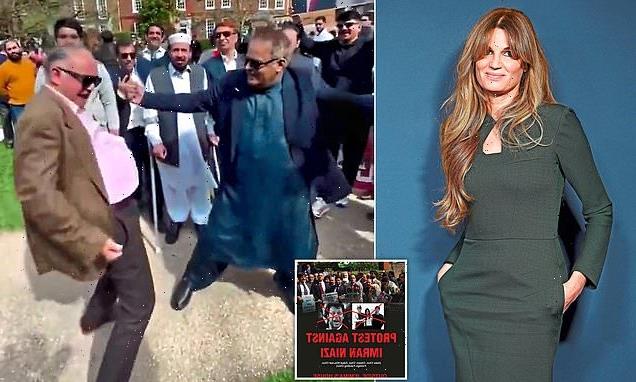 Dozens of rowdy demonstrators regularly gather outside Ormeley Lodge, the childhood home of Ms Khan near Richmond Park in South-West London, in protests against her ex-husband Imran Khan.

Speaking to The Mail on Sunday, Ms Khan revealed that the demonstrations, which have taken place numerous times over the past eight months, have included disturbing threats made against her and her children.

In a direct appeal to the Metropolitan Police, Ms Khan, 48, urged them to do more to protect her family following a failed attempt to assassinate her former husband in Pakistan last week.

Mr Khan, 70, the former cricket star and prime minister of Pakistan, was shot in the upper thigh and lower leg after a gunman opened fire during a rally in Punjab province on Thursday.

Despite the couple having divorced in 2004, Ms Khan and her family have become the focus of angry protests in London by supporters of Mr Khan’s political rival Nawaz Sharif.

The Mail on Sunday can reveal that in April, shortly after Mr Khan was ousted as prime minister, a message circulated online urging a crowd to gather outside ‘Jemima’s House’ in Richmond.

The message included a sinister image of the Khans’ two sons, Sulaiman and Kasim, both in their 20s, and another family member with a red cross struck through it. 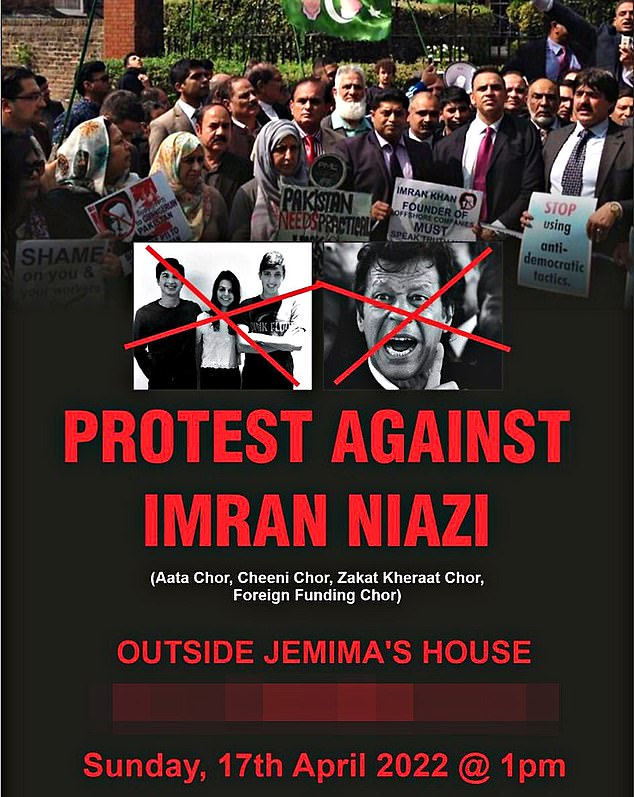 In April, shortly after Mr Khan was ousted as prime minister, a message circulated online urging a crowd to gather outside ‘Jemima’s House’ in Richmond. The message included a sinister image of the Khans’ two sons, Sulaiman and Kasim, both in their 20s, and another family member with a red cross struck through it (pictured)

During the demonstration on April 17, a man with a loudspeaker threatened to break into the 18th Century Georgian home, where Ms Khan’s 88-year-old mother Lady Annabel Goldsmith lives.

Addressing a crowd of more than 50 protesters, the man said demonstrators could ‘come up to your bedrooms, we would come in by jumping over the walls of your homes’.

In another video, released on TikTok, two demonstrators make sexually suggestive gestures as they dance outside the house.

After the demonstration, Ms Khan showed officers a transcript of the threats that had been made against her family. She claims they have taken no action.

She said: ‘A crowd of baying men regularly gather outside my mother’s house to loudly threaten me and my children by name, saying they will “break into my bedroom” – and apparently because those threats are being made in a foreign language which the police don’t understand, nothing can be done to prevent it…

‘I contacted the Met Police… to explain the nature of the threats being made, which also exist online, over six months ago and they said they would follow it up but I’ve heard nothing since.

‘The threats in Urdu continue outside my mother’s house. Given the assassination attempt on my ex-husband and father of my children, I hope the police might now be convinced to take threats from his political opponents more seriously.’

Around 20 police officers attended the April 17 demonstration but no arrests were made. Claims have circulated online that officers tucked into biryani curry provided by the demonstrators.

The Met Police said: ‘Officers were present following a protest . . . The group later dispersed. The food was obtained from a van providing hot food nearby but they had surplus meals after the event had finished so offered it to officers.’