WASHINGTON (Reuters) – The United States on Friday urged China to halt its militarization of the disputed South China Sea, drawing a rebuke from Beijing for sending U.S. warships and planes close to islands claimed by China in the strategic waterway. 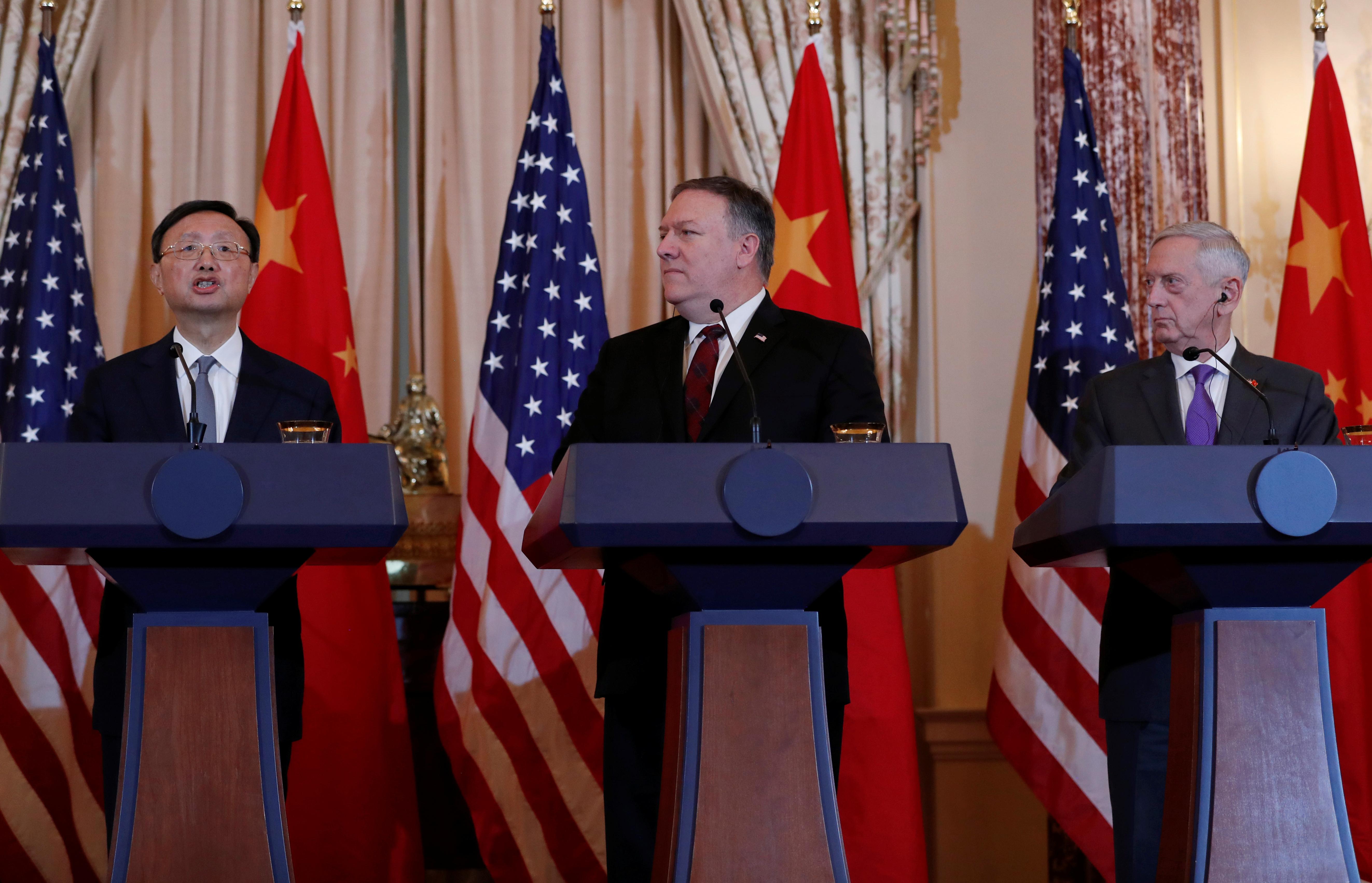 During a round of high-level talks in Washington, the two sides aired many of their main geopolitical differences, including a bitter trade dispute, freedom of navigation in the Asia-Pacific region, self-ruled Taiwan, and China’s crackdown on its Muslim minority.

Two visiting senior Chinese officials also seized the opportunity to warn that a trade war between the world’s two largest economies would end up hurting both sides and to call for keeping channels of communication open to resolve an issue that has unsettled global financial markets.

The talks appeared aimed at controlling the damage to relations that has worsened in recent months and at paving the way for an encounter between U.S. President Donald Trump and Chinese President Xi Jinping at the Group of 20 summit in Argentina at the end of November.

Even as the United States and China confront difficult challenges in their relationship, “cooperation remains essential on many issues,” U.S. Secretary of State Mike Pompeo told a joint news conference, citing efforts to persuade North Korea to abandon its nuclear program.

The meeting paired Pompeo and Defense Secretary Jim Mattis with Chinese Politburo member Yang Jiechi and Defense Minister Wei Fenghe. The annual U.S.-China Diplomatic and Security Dialogue was originally set for Beijing last month but had been called off amid rising tensions.

Pompeo took aim at China over its continued building of military installations on artificial islands and reefs in the South China Sea, where China insists it has sovereignty despite competing claims from some smaller neighbors.

“We have continued concerns about China’s activities and militarization in the South China Sea,” Pompeo said following the talks. “We pressed China to live up to its past commitments in this area.”

Yang said China was committed to working with the United States on “non-confrontation” but urged it to stop sending warships and planes close to the islands that Beijing claims. Washington insists it is acting under international law to preserve its access to the South China Sea.

While Pompeo spoke little about trade in his public comments, Yang said he hopes the two sides will find a mutually acceptable solution on trade “before long.”

China and the United States have slapped tariffs on hundreds of billions of dollars of each other’s goods, jolting global financial markets, and Trump has threatened to set tariffs on the remainder of China’s $500 billion-plus exports to the United States if the trade dispute cannot be resolved.

Trump’s administration has also accused China of meddling in U.S. politics ahead of this week’s congressional elections, charges China strongly denies, and the two have sparred over military and territorial matters.

Reflecting growing U.S. concerns about the Chinese cyber threat, a senior U.S. intelligence official on Thursday accused China of violating a 2015 agreement aimed at stopping cyber espionage through the hacking of government and corporate data.