Kenosha, Wisconsin: Chris Bernhardt is staring in disbelief at what used to be the Danish Brotherhood Lodge in Kenosha. For 110 years the lodge served as the fulcrum of the city’s Danish-American community, hosting regular bingo nights and breakfasts featuring traditional pancakes and sausages.

"A lot of people had their weddings and bridal showers here," says Bernhardt, whose family has been involved with the lodge for several generations. "There was a century’s worth of memorabilia in the basement bar." 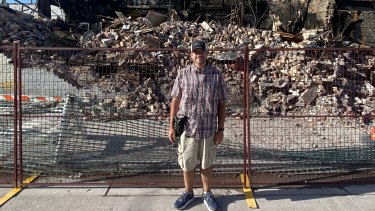 Robert Nelson outside what used to be the Danish Brotherhood Lodge in Kenosha, Wisconsin.Credit:Matthew Knott

Now the lodge is nothing more than a pile of charred bricks and sheets of metal. Rioters set fire to the building last week during protests that erupted after a white police officer shot Jacob Blake, a black man, seven times in the back. An elderly employee who tried to protect the mattress store next door was taken to hospital with a broken jaw after looters attacked him. A nearby used-car lot was set aflame: the resulting scene of burnt-out vehicles conjures up images of TS Eliot's The Wasteland.

"It’s just horrible, there’s no reason for it," Bernhardt says of the destruction. "I know people are angry but this is no way to show your anger."

This normally tranquil town of 100,000 people in Wisconsin has shot to national prominence as the latest flashpoint in America’s months-long reckoning over policing and race relations. US President Donald Trump has announced he will visit Kenosha on Wednesday (AEST), citing it as an example of the chaos he warns will flourish if Joe Biden is elected on November 3. 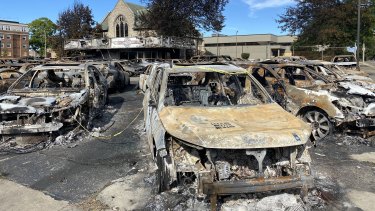 With tens of millions of Americans out of work and 180,000 dead after contracting COVID-19, Trump has leapt upon law and order as a potential game-changer that could deliver him four more years in the White House.

Unlike the violence playing out in other American cities, Kenosha sits inside a pivotal battleground state, giving the unrest here added political potency.

Robert Nelson, a former president of the Danish Brotherhood Lodge, says the destruction over recent days has caused a lot of locals who planned to vote against Trump to think again.

"The Democrats are losing ground," Nelson says. "A lot of Democrats aren't really denouncing this or trying to prevent violence from flaring up." A handgun sits in a hostler attached to his belt, reflecting Wisconsin's status as a firearm-friendly "open carry" state. 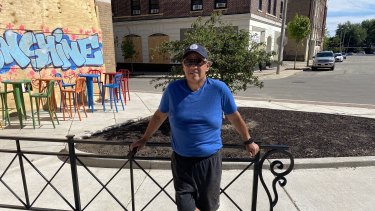 Dan Frankel in downtown Kenosha, Wisconsin, is reconsidering who he will vote for in the presidential election.Credit:Matthew Knott

Dan Frankel, who spent most of his life working at a car manufacturing plant in Kenosha, says he voted for Hillary Clinton in 2016. Now, after seeing so many businesses in his hometown destroyed, he is considering voting for Trump in November.

"His logic seems to make sense in situations like this," Frankel says, surveying the damage to properties in the city's downtown. "He says, 'Boom! You’ve got to take action right way before it gets out of control'."

He holds the city’s Democratic mayor and the state’s Democratic governor primarily responsible for letting the violence get out of control rather than Trump.

Ashley Knight, who is handing out a petition for Wisconsin's governor to be recalled, says: "I absolutely think it will move a lot of votes over to Trump."

Almost all the businesses in downtown Kenosha are boarded up to prevent damage. In a bid to project a sense of optimism, locals have painted over the plywood with colourful artwork and hopeful slogans ("United we stand, together we grow").

But the sense of fear is unavoidable. The city goes under curfew each night at 7, with residents banned from leaving their homes until 7am. Camouflaged trucks carrying soldiers from the National Guard roll through city streets. In an effort to avoid being targeted by looters, building owners have put up signs saying "children live here", "animals live here" and "the elderly live here". Gun dealers in the area have struggled to keep up with demand as frightened locals rush to stock up on firearms and ammunition.

"The demand in Kenosha since the riots has been unprecedented," says gun seller Joseph LaJoy. "I've been fielding between 100 and 150 calls a day."

She believes the looting and property damage has undermined support for the Black Lives Matter movement. "Many people don't differentiate between the peaceful protesters and the opportunistic people who are taking advantage of the situation to create chaos," she says.

Polls have already shown a softening in support for Black Lives Matter in recent months after a spike in popularity following the killing of George Floyd in late May.

A YouGov poll released in recent days found that more Americans blame protesters than the police for the violence in Kenosha. A majority of respondents said the protests had gone too far.

But that same poll showed more respondents believe Biden would do a better job handling violent crime and the protests than Trump, complicating Trump's belief the issue will prove to be political slam dunk for him.

In a speech in Pennsylvania on Tuesday (AEST) Biden sought to get on the front foot, accusing Trump of "stoking violence in our cities".

"Does anyone believe there will be less violence in America if Donald Trump is re-elected?" Biden asked. "He can’t stop the violence because for years he has fomented it."

It's a message Democrats hope will cut through with wavering voters like Frankel, who are drawn to the President's tough-on-crime rhetoric but question whether he is capable of restoring calm to America's cities. Asked if he is glad Trump is visiting Kenosha this week, Frankel says: "Hell no! I think it will fan the flames."

Resident Bob Krummel, 95, agrees: "He's just going to bring more turmoil here". Krummel voted for Trump in 2016, drawn to his image as a businessman and political outsider. He now regards that decision as a "fatal mistake". Unlike Frankel, he's made up his mind and is going to vote for Biden. "We can't have four more years of this," he says.