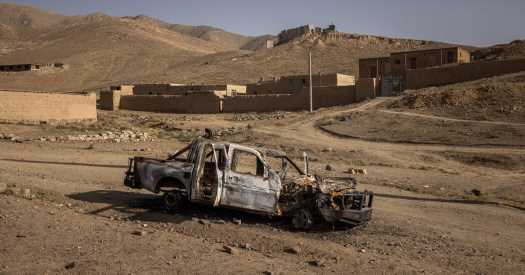 CHAK-E WARDAK, Afghanistan — Sixty bone-rattling miles southwest of Kabul, remnants of America’s longest war are abundant. Pillaged outposts scatter the hilltops, and skeletons of burned-out police pickup trucks and Humvees litter the road that weaves through the valleys in between.

The walls of an American-constructed local government building in Chak-e Wardak, a district in Wardak Province, are pockmarked by the impacts of recently fired bullets and rockets. Holes have been carved out of the walls for shooting positions, and only a few of the glass windows remain intact.

But the once-constant volley of rifle fire is no more.

In recent years, driving out of Kabul, Afghanistan’s capital, would evoke fear of pop-up Taliban checkpoints at which young fighters pulled passengers out of cars, looking for government workers or members of the security forces. Getting caught up in an impromptu shootout between the two warring sides was always a risk.

But since the Taliban takeover in mid-August, the majority of Afghanistan’s countryside has seen a substantial drop in violence. Where airstrikes and pitched battles would be commonplace, the guns have fallen silent. The checkpoints have mostly disappeared.

In their place is a developing humanitarian crisis and a new Taliban government that at times seems just as unaccustomed to governing as many Afghans are to living in a period without fighting.

Millions of Afghans are facing a winter of food shortages, with up to a million children at risk of starvation in the absence of an immediate international relief effort, United Nations officials say.

Adding to the misery, prices for basic foodstuffs have risen sharply, and many Afghan families are being forced to make do with rice and beans instead of chicken and other meats.

For now, though, in the Chak-e Wardak district, a patchwork of apple orchards and villages, as in many other areas of the country, there is widespread relief at the end of the fighting and the return to something like normal life.

On the second floor of the ransacked district administrative center, the newly appointed Taliban police chief, Qari Assad, sits in an old chair. On his desk, rests an even older Kalashnikov and a makeshift Taliban flag with a hand-drawn “Kalima Shahada,” the text of the Islamic oath, at its center.

The black-bearded and turbaned Mr. Assad had just started on his second glass of green tea on a recent Thursday when two brothers from the neighboring Sayedabad district arrived with a complaint.

“The man who married my daughter didn’t tell us he already had a wife,” said Talab Din, his fingers brushing through his graying beard. “My daughter told me to let it be, she said she was happy with him. But now he has beat her and stabbed her in the leg. We have come here to settle this dispute!” He showed no fear of the new police chief, having interacted with the Taliban in the past.

“We will be dealing with this issue immediately,” Mr. Assad assured the father.

Long before their full takeover, the Taliban were already governing and delivering swift justice in many areas, often through their own court system. Chak-e Wardak, along with many parts of rural Afghanistan, has been under their de facto control for two years.

But the question remains whether the movement, which has brutally put down protests in urban areas against its rule, can pivot to a solid governance structure soon enough to cope with the problems underlying the country’s gathering humanitarian crisis.

Outside the local government building, Fazl Ur-Rahman, 55, was adjusting the load of his small truck, piled high with hay. “Before, security here was very bad, we were suffering at the hands of the military,” he said, referring to the Afghan army. “They were beating people, they were asking people to take water and food to their checkpoints.”

The situation had improved under the Taliban in recent weeks, he said, and people could safely return to work. “Before, people could not go anywhere at night, they would be at risk of being shot,” he said. “It has been a long time now since a bullet hit our homes.”

Further west up the valley, another Taliban flag was waving atop the oldest hydroelectric dam in the country. Built in 1938, its turbines once provided electricity for surrounding parts of Wardak, plus Ghazni Province and even parts of Kabul Province, but poor maintenance had rendered it defunct.

As a nomadic woman guided her sheep across the dam, Afghan boys took turns jumping into the water below, a welcome relief from the scorching sun.

Up the hill from the dam’s basin is the home of the Ayoubi family, who had been displaced to another village two years ago as the fighting intensified. In early August, the family returned after the fighting ended to a house flanked by a lush garden filled with pumpkins planted by a caretaker.

Over a lunch of rice, tomatoes and corn, Abdullah Ayoubi, the oldest son, spoke about the atrocities that had occurred in the valley. “There is no doubt that the Taliban are also corrupt, but it doesn’t compare to what the military was like,” he said. “Not only did they take money from the vans and trucks, if someone had a big beard, they would say they are Taliban and hurt them.”

Mr. Ayoubi said his brother Assad was in the ninth grade when the Afghan and American armies came to the district, looking for a Taliban commander who went by the same name. They grabbed his brother instead, he said, and took him to Bagram prison, notorious for its harsh treatment of prisoners, where he was tortured.

“It took us four months before we found him,” Mr. Ayoubi said. “When we went to visit him in Bagram, he shouted at me with chains on his legs and handcuffs around his wrists.”

After 18 months, Assad was released. Because of how angry he was, Mr. Ayoubi said, he joined a local Taliban commander named Ghulam Ali. He became an expert in shooting Kalashnikovs and rocket-propelled grenades. On his phone, Mr. Ayoubi has a grainy image taken from a video. It showed an unrecognizable man enveloped by fire, smoke and dust.

Understand the Taliban Takeover in Afghanistan

Who are the Taliban? The Taliban arose in 1994 amid the turmoil that came after the withdrawal of Soviet forces from Afghanistan in 1989. They used brutal public punishments, including floggings, amputations and mass executions, to enforce their rules. Here’s more on their origin story and their record as rulers.

Who are the Taliban leaders? These are the top leaders of the Taliban, men who have spent years on the run, in hiding, in jail and dodging American drones. Little is known about them or how they plan to govern, including whether they will be as tolerant as they claim to be. One spokesman told The Times that the group wanted to forget its past, but that there would be some restrictions.

How did the Taliban gain control? See how the Taliban retook power in Afghanistan in a few months, and read about how their strategy enabled them to do so.

What happens to the women of Afghanistan? The last time the Taliban were in power, they barred women and girls from taking most jobs or going to school. Afghan women have made many gains since the Taliban were toppled, but now they fear that ground may be lost. Taliban officials are trying to reassure women that things will be different, but there are signs that, at least in some areas, they have begun to reimpose the old order.

What does their victory mean for terrorist groups? The United States invaded Afghanistan 20 years ago in response to terrorism, and many worry that Al Qaeda and other radical groups will again find safe haven there. On Aug. 26, deadly explosions outside Afghanistan’s main airport claimed by the Islamic State demonstrated that terrorists remain a threat.

How will this affect future U.S. policy in the region? Washington and the Taliban may spend years pulled between cooperation and conflict, Some of the key issues at hand include: how to cooperate against a mutual enemy, the Islamic State branch in the region, known as ISIS-K, and whether the U.S. should release $9.4 billion in Afghan government currency reserves that are frozen in the country.

“In this moment, my brother shot a tank with a rocket,” he said, though the vehicle appeared to be an Afghan Army Humvee.

In 2019, Assad was killed during a battle with Afghan soldiers not far from the family home. He had been a fighter for five years. “We buried him near the house,” Mr. Ayoubi said.

In this now-sleepy valley, the main landmark is a hospital founded in 1989 by a German woman, Karla Schefter. Today, the hospital is supported by the Committee for Medical and Humanitarian Aid in Afghanistan, which relies on private donations.

Faridullah Rahimi, a doctor at the facility, said that in his 22 years there, this was the first time there were no patients with conflict-related injuries.

“People from way beyond Chak come here for treatment,” said Dr. Rahimi, standing in the hospital’s verdant courtyard. “We used to treat civilians, government soldiers and Taliban fighters, and never had an issue.”

For now, the doctor said, the hospital had enough medical supplies, but with most banks closed, it had no money to purchase more or to pay them their salaries.

Still, Dr. Rahimi said, the hospital would continue operating as best it could. “We have seen regimes come and go, but the hospital will remain.”

Of the 65 employees at the hospital, 14 are women. The Taliban have said they would allow women to continue working in health care in order to treat female patients.

Malalai, 28, a midwife who works at the hospital and uses only one name, said members of the Taliban had visited the facility and spoken to her. “I have been working here for eight years,” she said. “For us, there is no threat from the Islamic Emirate.”

Near the hospital entrance, a Russian tank from a previous war was almost completely submerged in the sand — a stark reminder of just how long this area has seen war.

Back at the Ayoubi home, Abdullah spoke softly as his son, 2, napped in the corner, tucked underneath a scarf. Perhaps he would be part of a generation in Afghanistan that grew up without ever knowing war.

“Assad, named after my brother,” Mr. Ayoubi said, pointing at the child. “It didn’t have to be this way.”