FREDERICKSBURG, Tex. — From a porch swing at the Southold Farm & Cellar tasting room outside this small city in Texas Hill Country, a vista of scrubby ranchland stretches to the horizon.

A house on a hill looms invitingly nearby, constructed by the Southold proprietors, Regan and Carey Meador, after they moved here in 2017 with their children, Coralai and Sawyer. Down below is their winery, a functional structure possessing little in the way of charm, though the cats seem to like it fine.

Along a steep, east-facing limestone hillside is a new 16-acre vineyard, planted with rootstock onto which grape vines will be grafted in the near future.

If all goes well, the Meadors will be harvesting white varieties rare to Texas like xarello and petite manseng and a mixture of reds, possibly including cinsault, alicante bouschet and touriga nacional.

The Meadors present a sharp contrast to the prevailing nature of Texas winemaking, where — from the size of the vineyards to the style of the wines — bigger has always been considered better.

People in Texas may talk about a sense of place, but the experimental attitude and tools for expressing terroir have taken a back seat to imitating other regions. But the Meadors, by taking risks and exploring, may demonstrate a truer path for expressing Texas in a bottle.

Southold seems a picture of contentment, a young family striving to make its mark in the new world of Texas wine. It will be difficult, groundbreaking work, with no clear model for success and no guarantee of achieving it. 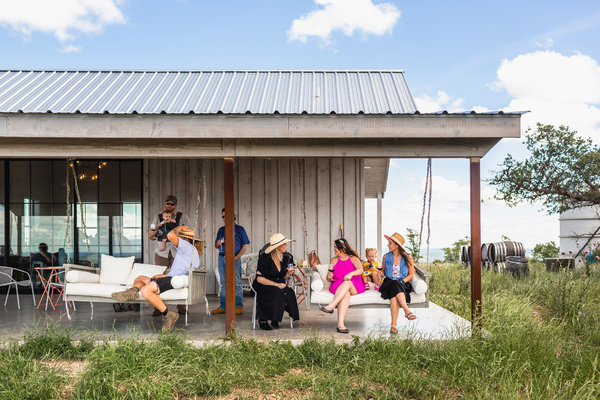 The obstacles seem only to be the unpredictability of nature and the wine market. The Meadors can live with that.

Three years ago, the difficulties appeared profound. Their winery was on the North Fork of Long Island, in the town of Southold. It made some of the most exciting wines in the region, and was poised to become the sort of trailblazing innovator that drives interest in a wine area.

In 2013, they planted a vineyard on the North Fork with similarly unusual grapes, like lagrein, teroldego and goldmuskateller, and applied for a zoning variance to build a small winery on their property. The Southold Zoning Board rejected their application and all appeals.

Disillusioned, they decided to sell and start over in Texas, where Mr. Meador grew up, arriving in April 2017. Already, this second incarnation has ascended to a leading role in drawing attention to Texas wine.

Just two vintages in, Southold is again making exciting wines, using an assortment of grapes purchased from both the High Plains, a flat, fertile, high-elevation area in the Lubbock area, the state’s primary growing region, and Hill Country, which contains perhaps Texas’s most promising growing areas.

Their wines are fresh and light, almost the antithesis of the powerful, opulent wines that have been more typical in Texas.

Southold bottles like Therapy for Liars — the proprietary names change from year to year — are different. This 2018 blend of 60 percent grenache, with roughly equal parts merlot and mataro (another name for mourvèdre), all grown at Robert Clay Vineyards in Hill Country, is herbal and crunchy, lightly fruity and just plain delicious.

Foregone Conclusion, a 2017 bottle made entirely from alicante bouschet from the Letkeman Family Vineyard in the Texas High Plains, is savory and rootsy, lively and earthy.

To Mr. Meador, these wines more naturally reflect Texas than the prevailing style. “How does big, heavy, oaky wine fit?” he said. “We eat barbecue and Mexican food, and they taste better with something fresh.”

I don’t see many alicante bouschets. The grape is often a part of old mixed vineyards, used for its ability to add a deep, dark color to red blends. But that’s part of Mr. Meador’s experimental nature, determining what works and what does not in this place, regardless of status or history.

“I’m willing to take risks, you’ve got to try things,” Mr. Meador said as we drove in his big white pickup truck past fields of bluebonnets on our way to visit Robert Clay Vineyards in Mason, on the northwestern edge of Hill Country. “There are really old vines out here with odd things, like graciano, dolcetto, petite sirah,” he said.

Texas’ history of grapes and wine stretch back more than a century, but Prohibition ended a nascent industry. As grape-growing and winemaking have been reestablished over the last 40 years, simple, small-scale operations and the intricacies of place have rarely been part of the formula.

Regardless of where it was grown, much wine from Texas producers is sold out of tasting rooms in Hill Country in central Texas. But only a small percentage of that wine is actually made in Texas from Texas grapes.

State law permits wineries, if they make a little Texas wine, to import a lot of wine from other places — California, Italy, Israel, for example — and bottle it under their proprietary labels.

Not all Texas wineries are like that. Fall Creek makes a range of decent bottles, as does Lewis Wines and Duchman. And some producers are very much on Southold’s path.

William Chris makes an enticing collection of graceful, floral wines and appealing pétillant naturels. Adrienne Ballou, an assistant winemaker at Southold, also makes tiny amounts of wonderfully appealing wines, like a 2017 mourvèdre from the High Plains, under the Lightsome label.

Henry Crowson, a young producer who worked at William Chris, now operates Crowson Wines in Johnson City, making a portfolio of wines with no added sulfur dioxide, a stabilizer almost universally used in the wine industry. Some Crowson wines are lovely; some are less successful experiments.

Most Texas grapes are grown in the High Plains, a farming epicenter where grapevines are often treated like another type of row crop, rather than in Hill Country, which, though it might have more potential for making interesting wines, was historically the province of ranchers.

“It’s easier to tell farmers to plant grapes than ranchers,” Mr. Meador said. “The biggest conversation that needs to happen is, where does it make sense to plant grapes in Texas?”

One person trying to find an answer is Dan McLaughlin of Robert Clay Vineyards. In 2012, he and his wife, Jeannie, bought the property, which had been planted in 1996.

Mr. McLaughlin, an internet technology consultant, had never visited another wine region before. But he met Mr. Meador, as well as Krista Scruggs, a young winemaker working on a Texas project. She was a protégé of Deirdre Heekin, who makes great, unconventional natural wines from hybrid grapes in Vermont.

Taken by Ms. Scruggs’s enthusiasm for natural wines, Mr. McLaughlin paid a visit to Ms. Heekin in Vermont, stopping at Southold on Long Island on the way, thus forging an unlikely connection between Vermont and Texas viticulture.

Mr. McLaughlin is now one of very few Texas growers trying to farm organically. On grassy, sandstone fields amid chickens and geese, he tends grenache, barbera, chardonnay, mourvèdre and viognier, along with other varieties. Mr. Meador is one of his best customers.

An important lesson that Mr. Meador took from Ms. Heekin is to step back from conventional assumptions, like the belief that Texas is too hot to make certain kinds of fine wine, or that Texas must mimic other regions.

“I doubt that Texas is too hot, which is like saying Vermont is too cold,” Mr. Meador said. “It’s too hot to make Vermont wine here, too hot to make Napa cab. People have written off grapes like chardonnay because they couldn’t make the wines they were trying to emulate. We just have to be different.”

Texas has its own sets of problems, like rattlesnakes and scorpions in the vineyard.

But Mr. Meador said only one issue keeps him up at night: finding enough skilled workers. The Texas model is to do everything mechanically, from pruning to picking, which is why the long rows in the High Plains are the norm. But Mr. Meador’s meticulous farming methods, not unusual in other fine wine regions, require skilled hand pruning and hand harvesting.

After initial indifference to Southold’s arrival, Austin, Houston and the Hill Country have embraced the Meadors as Long Island never did, and Mr. Meador can now see a future clearly.

“I get to make all the mistakes,” Mr. Meador said. “My kids get to fix them, and the grandkids get the benefit.” 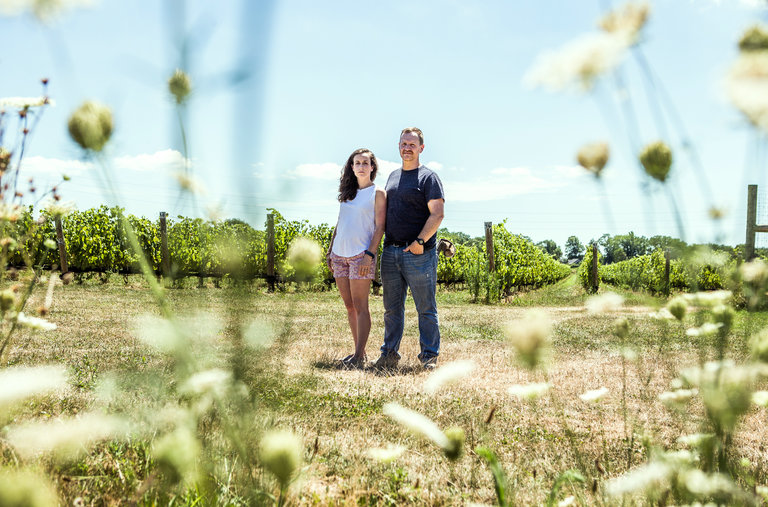