A surreal clip shows the three-year-old lioness approaching an open-sided vehicle as an unprotected flinches in her seat. 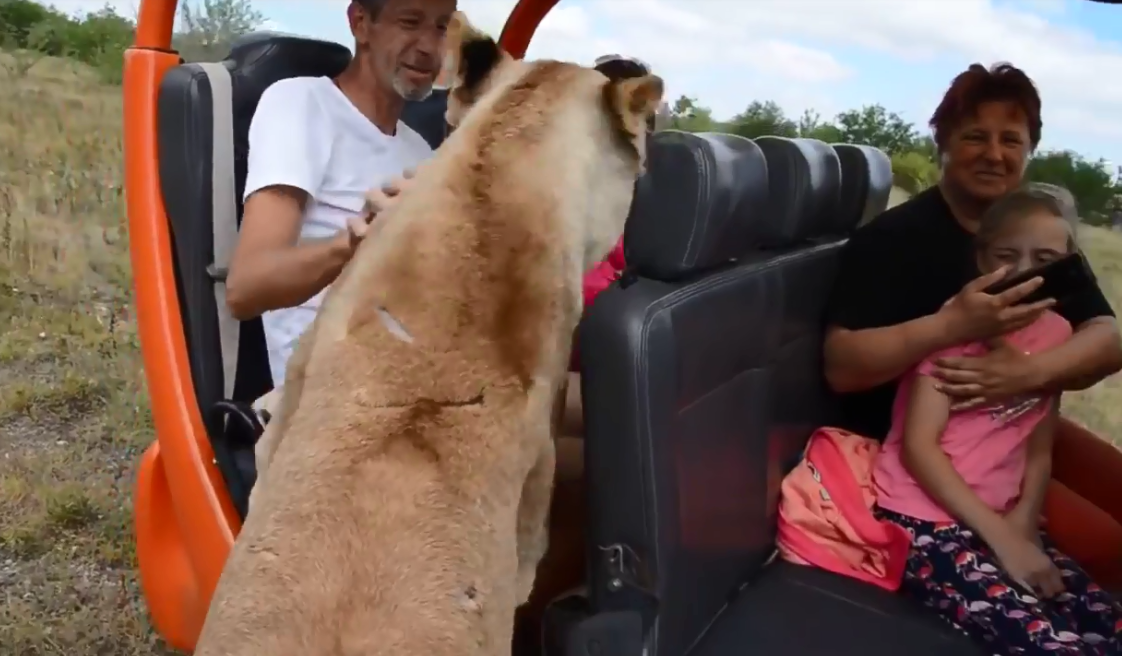 Then the big cat – known as Lola – tries several times seeks to kiss a young girl.

Her nervous mother is seen clutching her tight before the beast is pulled away with his bare hands by world famous lion whisperer Oleg Zubkov, 50, owner of the park.

The lioness also sought to cuddle a young woman who moved away as Zubkov – in a green shirt – pulled her off.

The untethered animal – rescued two years ago from being put down by a private zoo in Russia – was reportedly “purring like a cat” although this is something lions are supposed not to be able to do. 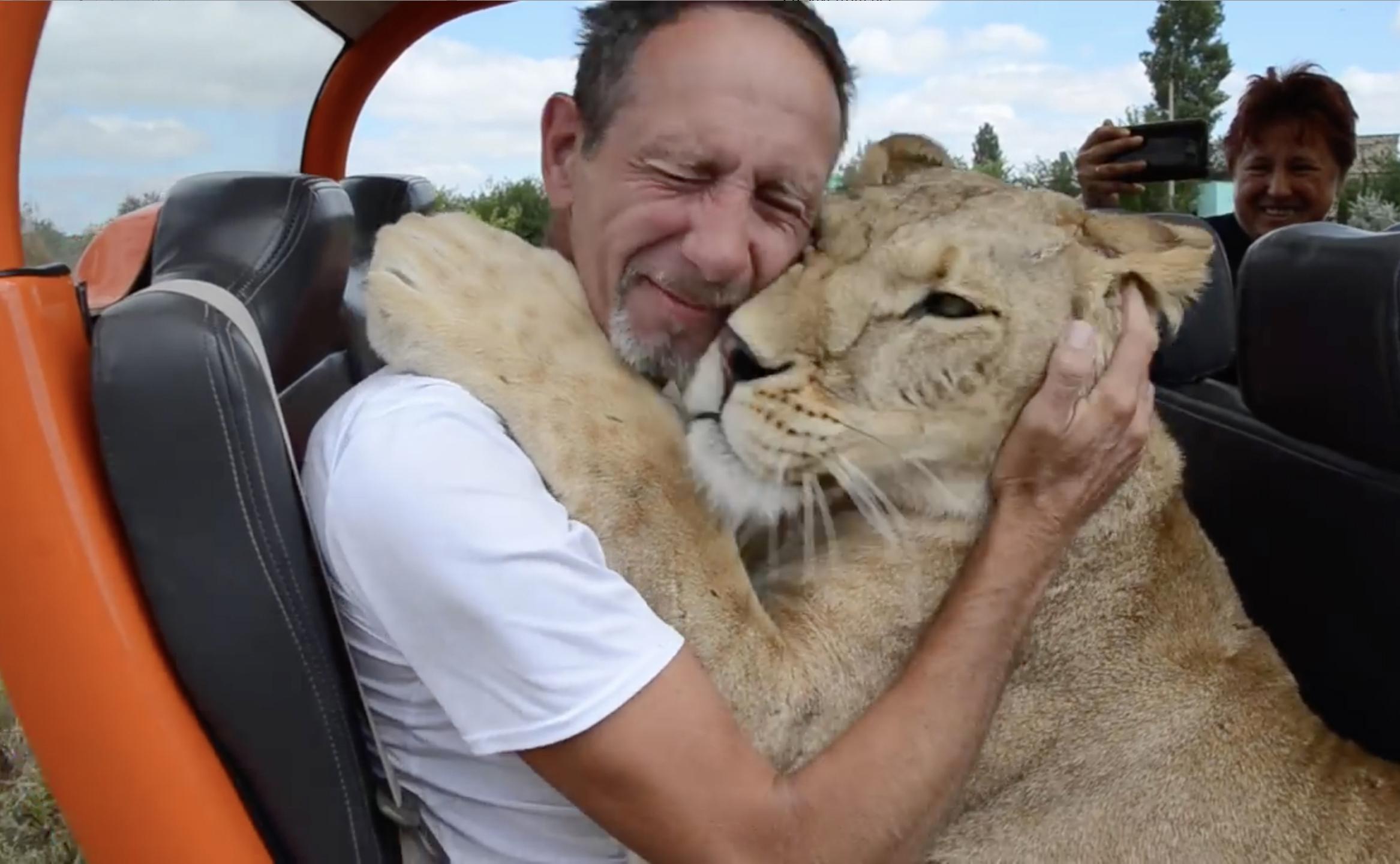 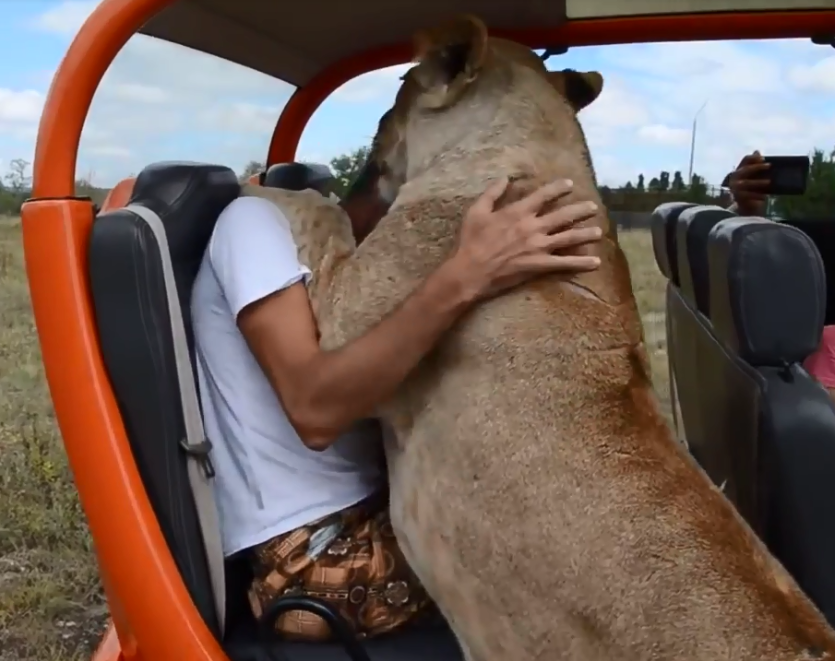 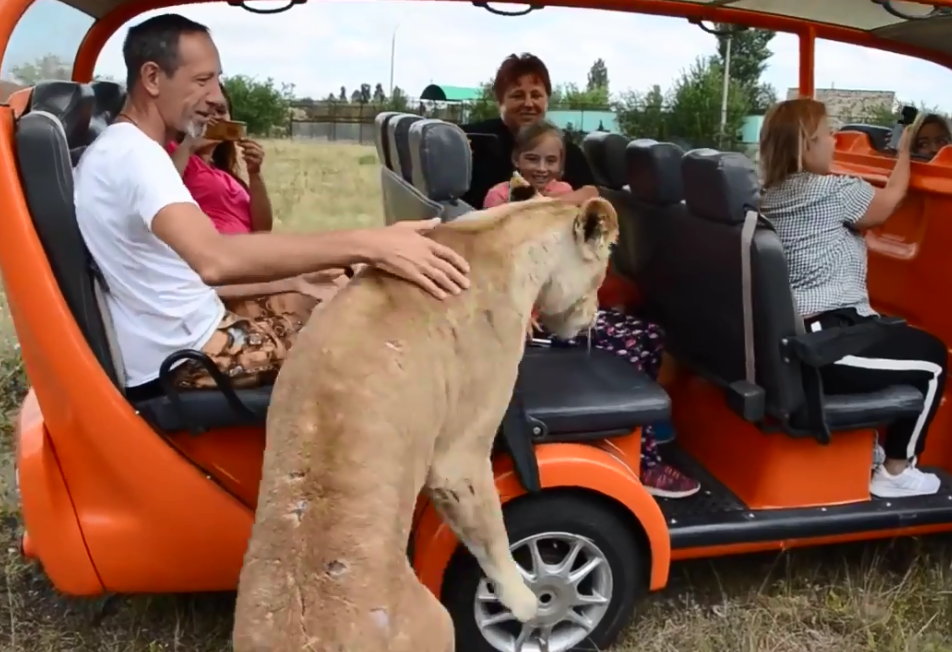 Two other unchained male lions are nearby as the video was shot.

The astonishing scene is from the Taigan Safari Park in Crimea, annexed by Russia from Ukraine in 2014.

Zubkov allows visitors to mix with big cats in scenes that defy normal health and safety rules and would be forbidden elsewhere.

“If a giant lioness jumps into your arms while you drive around Safari park, and purrs like a cat, then you can be sure that this is Lola from Chelyabinsk,” said Safari park director Tatiana Aleksagina. 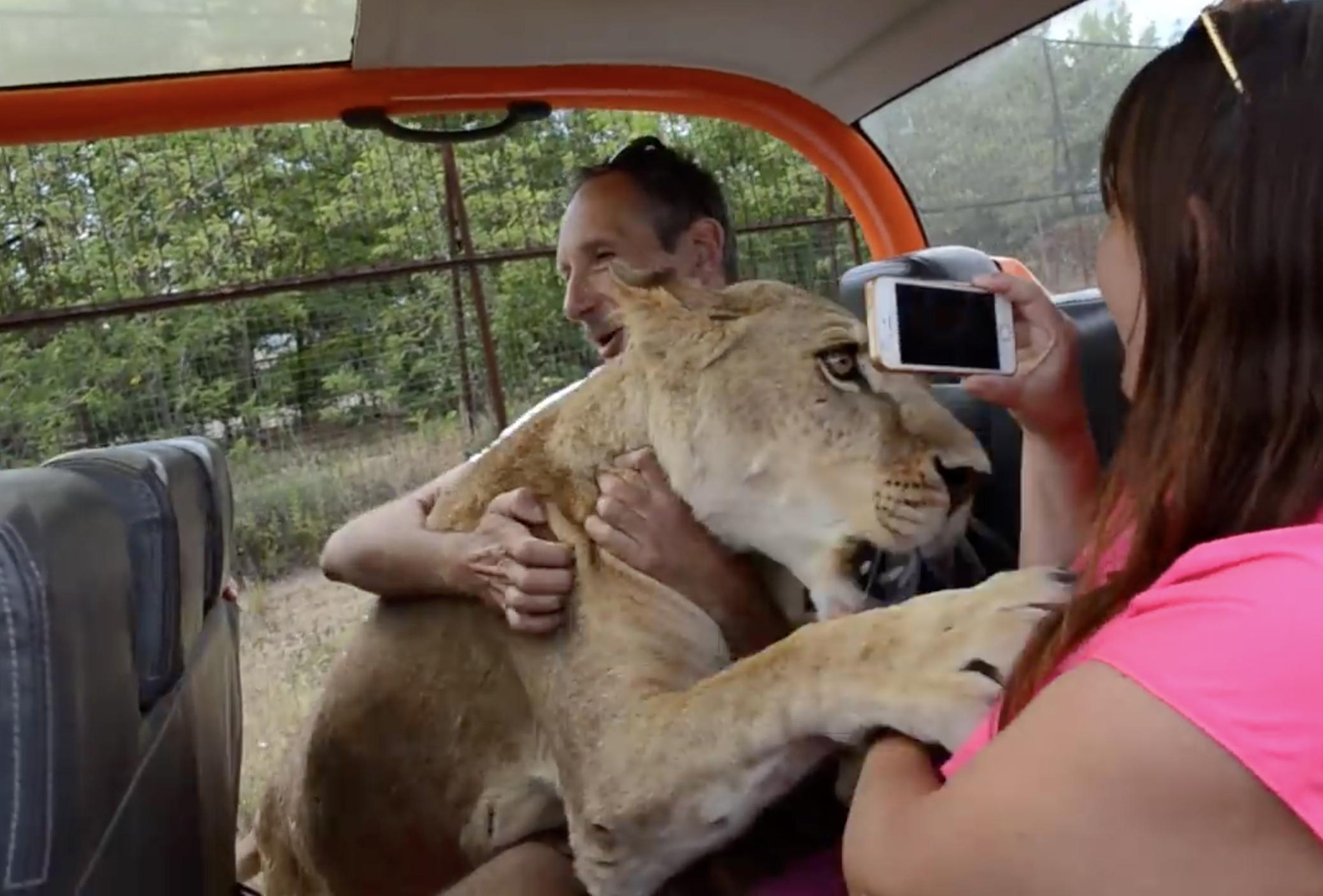 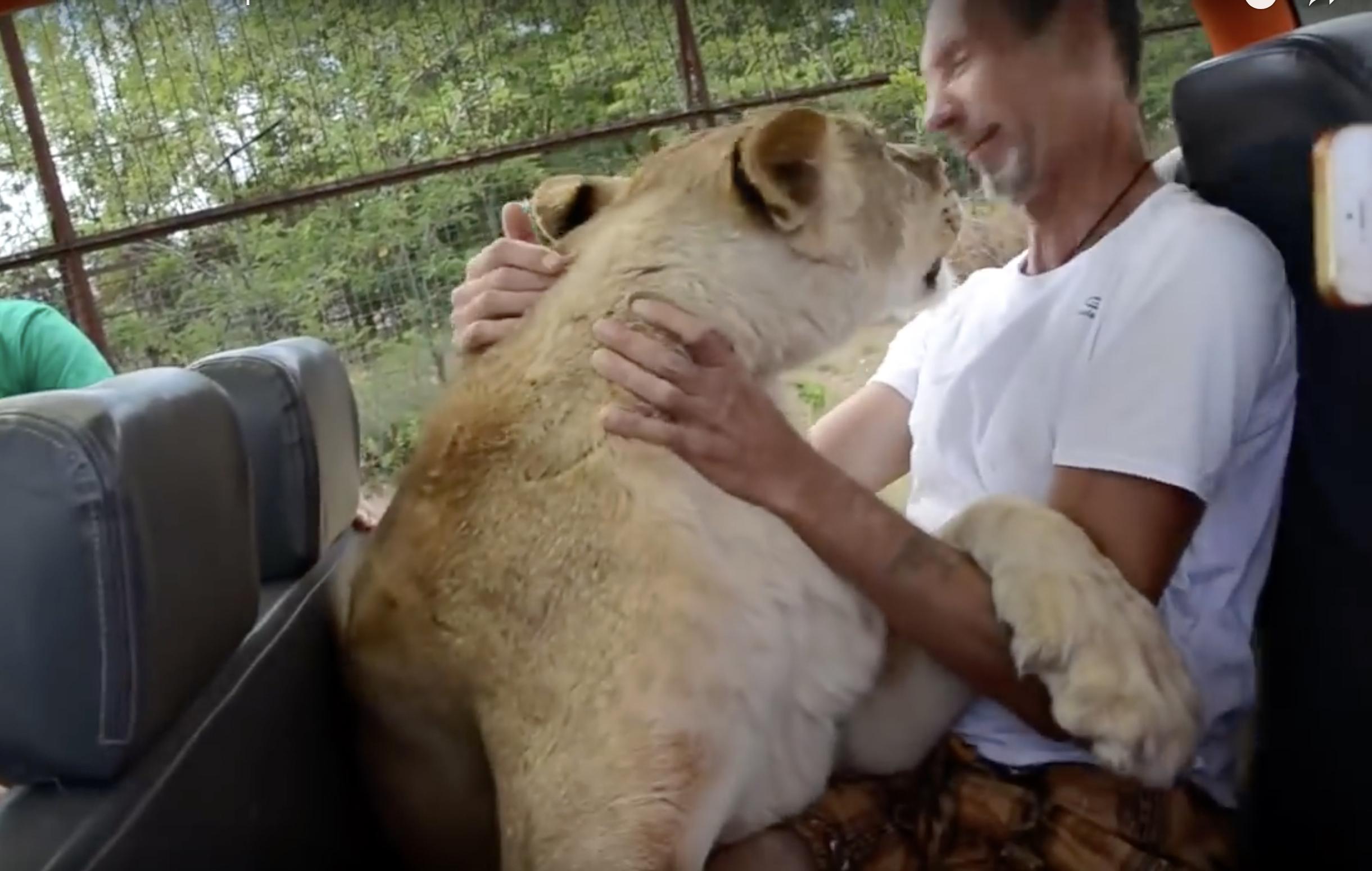 “Life in the park has transformed her into one of the kindest wild animals we’ve seen.

“She just gave birth to her first cub, a lioness we called Lilu, and she loves coming to say hello to tourists.

“In fact, she is so passionate in jumping into safari bus with kisses and hugs that many tourists can’t handle it.

"They can’t believe that all Lola wants to do is kiss and hug.” 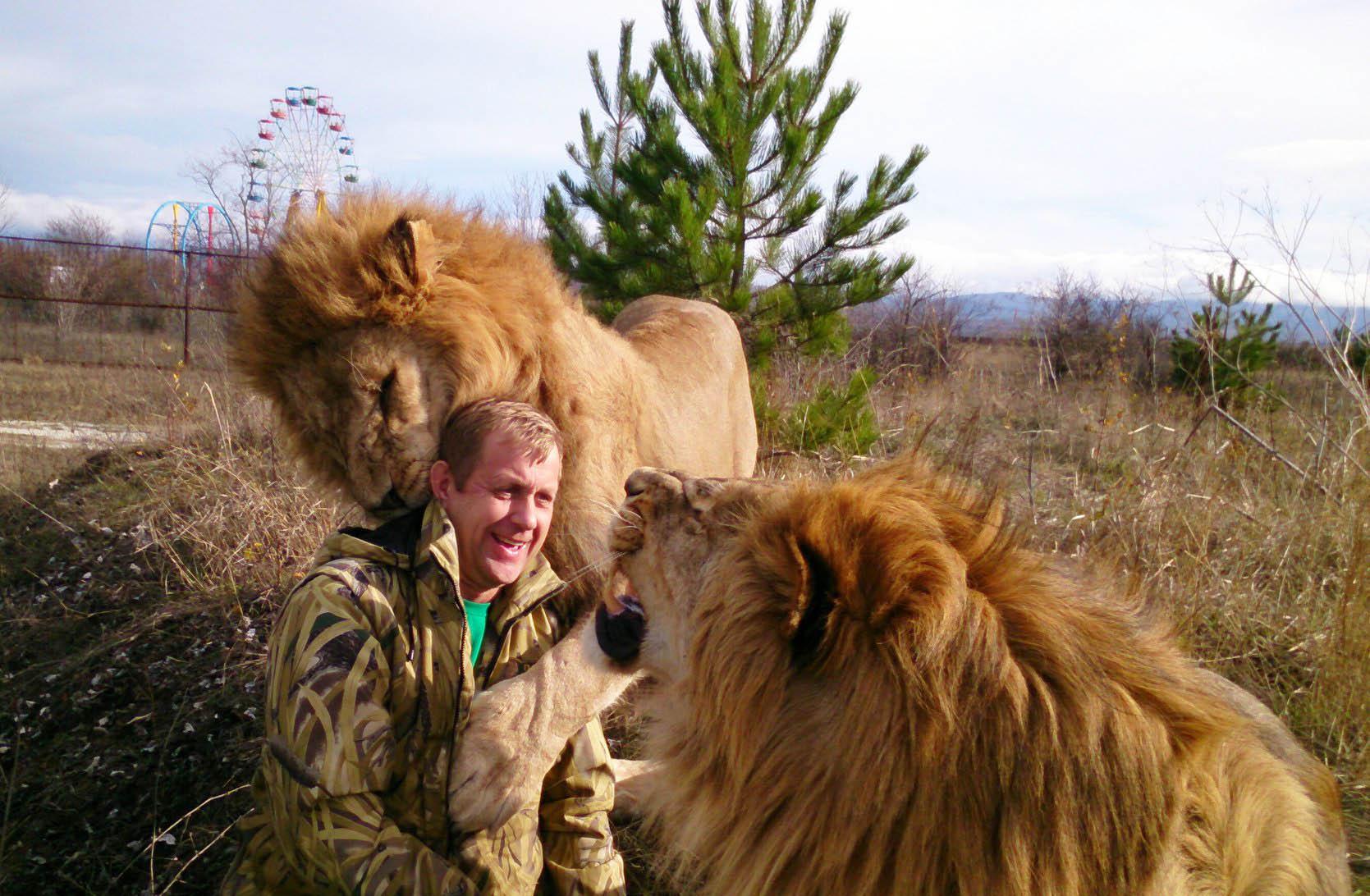 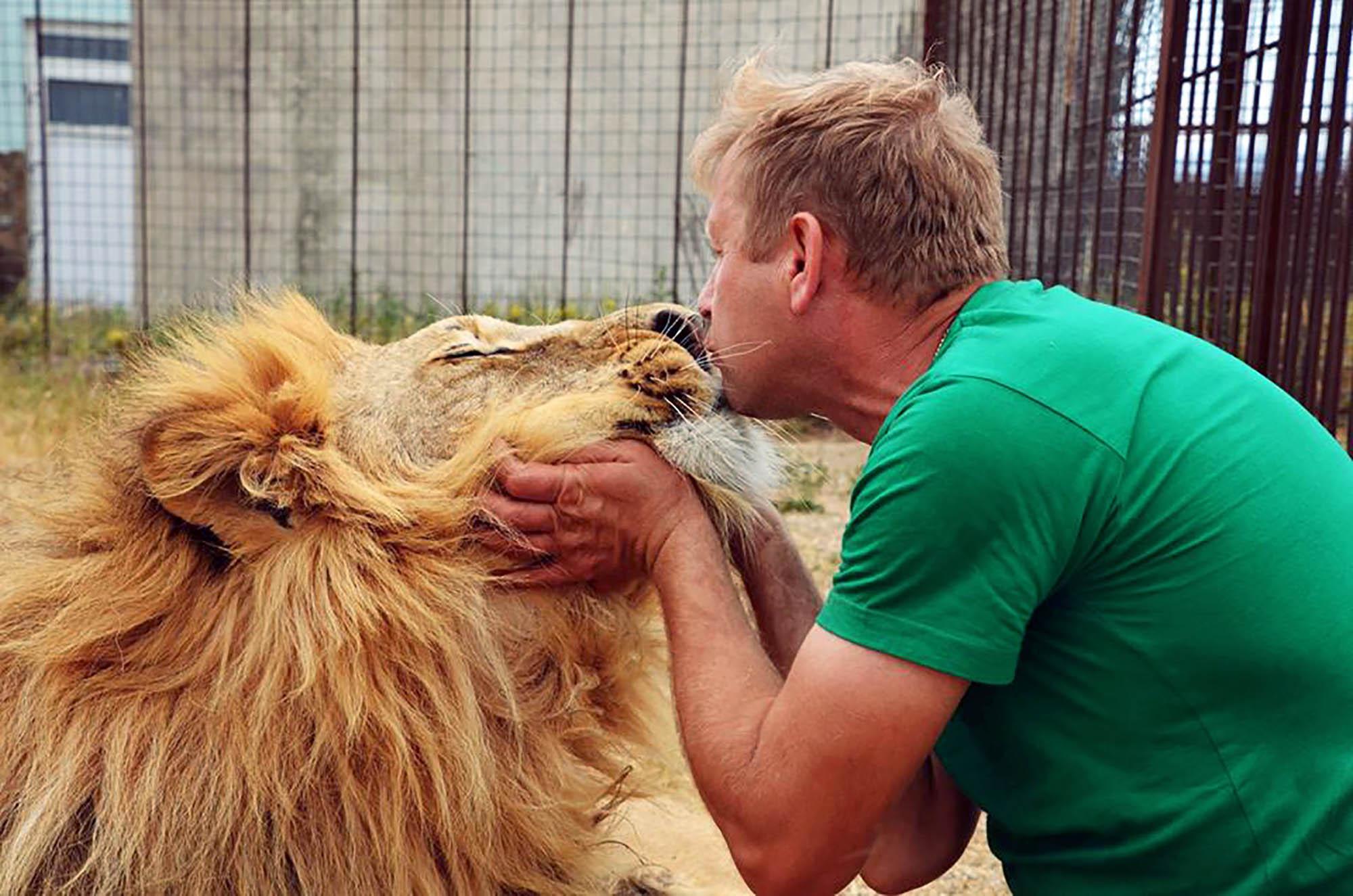 Yet when she arrived at the park after being neglected at the zoo which was poised to put her down – because they couldn’t afford to feed her – she was hostile to people.

But she was tamed by Zubkov, who insists his animals will not harm tourists and that they are safe if accompanying him.

The lioness was rescued by Karen Dallakyan, a vet and animal shelter owner in Chelyabinsk.

“Lola was in horrible condition after being fed with too much cheap cooked meals like porridge,” he said.

“A huge tummy didn’t let her jump, and her joints ached from carrying extra weight.

“She had to go through a strict diet and in a matter of weeks she started to move around and jump, like any young animal is supposed to do.

“We knew from the start that Lola could not stay with us, as our open air shelter in Chelyabinsk was too cold for her.

“We got in touch to lions shelters around the world in Mexico, Sochi and Crimea.

“Taigan Safari Park was the first one to respond.”