From remote Thai tribes to a Mongolian ‘eagle huntress’: Dozens of incredible images from around the world compete for the ‘Earth Photo’ of the year award

Stunning images from across the globe have revealed earth’s incredible diversity from coconut markets in Mexico to remote tribes in Thailand.

Striking shots of field workers in Asia, animals in the Arctic and stunning snow covered forests have been selected for the major new photography competition – Earth Photo.

Fifty incredible pictures and four films have been shortlisted for the brand new award, which celebrates images which encourage discussion about our planet.

A huge 1280 submissions from 19 different countries were judged by an expert panel with backgrounds in Photography, Film, Geography and Ecology.

After being carefully whittled down to 50 images and four films, the inaugural exhibition is being presented at the Royal Geographical Society in London until September 21. 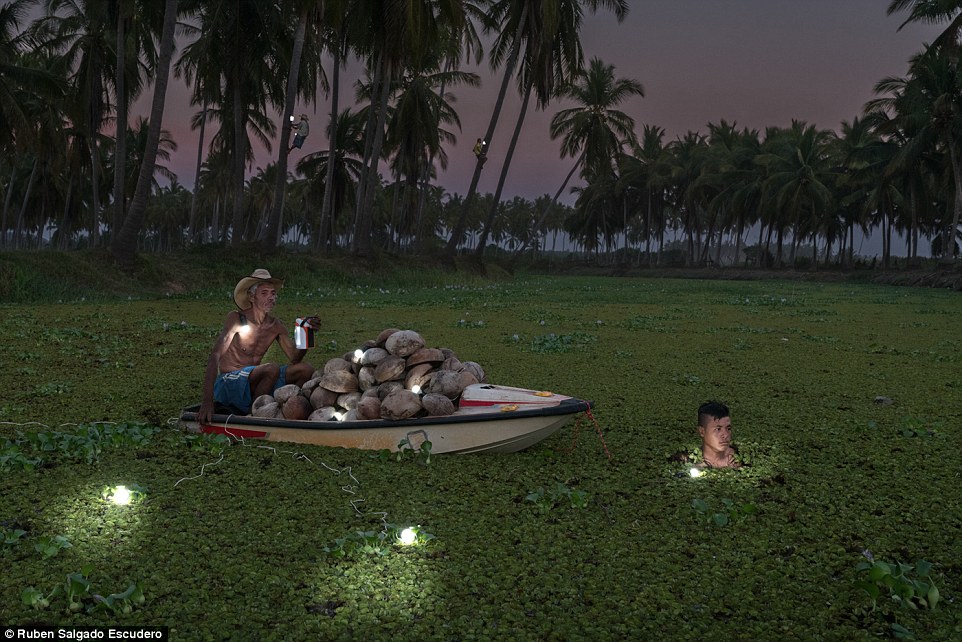 Cristobal Cespedes Lorenzo, 51, sits on his raft while carrying coconuts across the river to his home in Copala, Mexico. Cristobal and Francisco Manzanares Cagua aged 16 both work picking coconuts which they then sell to a company which makes coconut butter and oil. The image was taken by Ruben Salgado Escudero 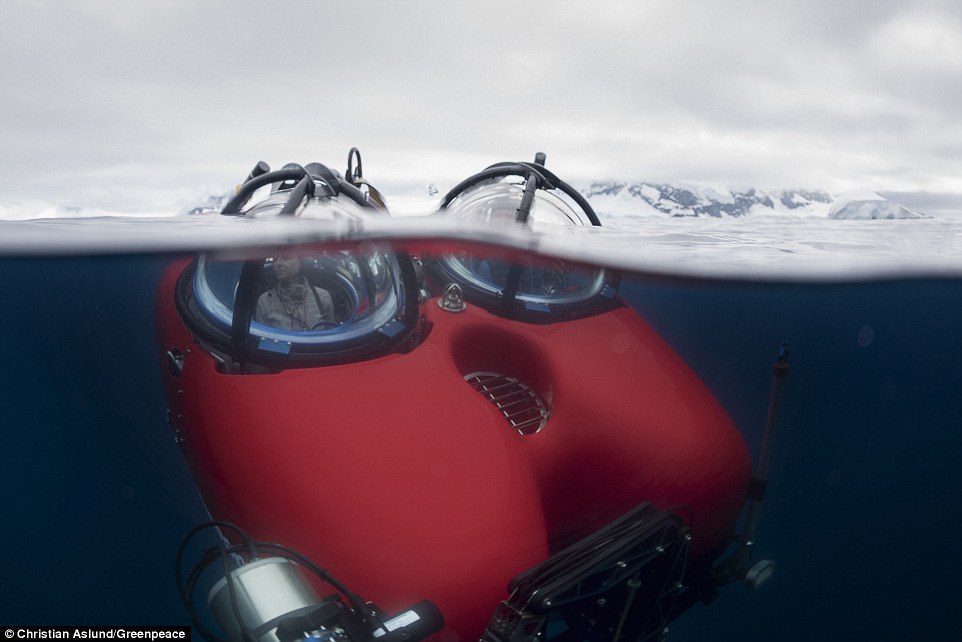 Antarctic biologist Dr Susanne Lockhart and submarine pilot John Hocevar on a descent in a two person submarine outside the Antarctic Peninsula where Greenpeace is conducting submarine-based scientific research. The image was captured by Christian Aslund 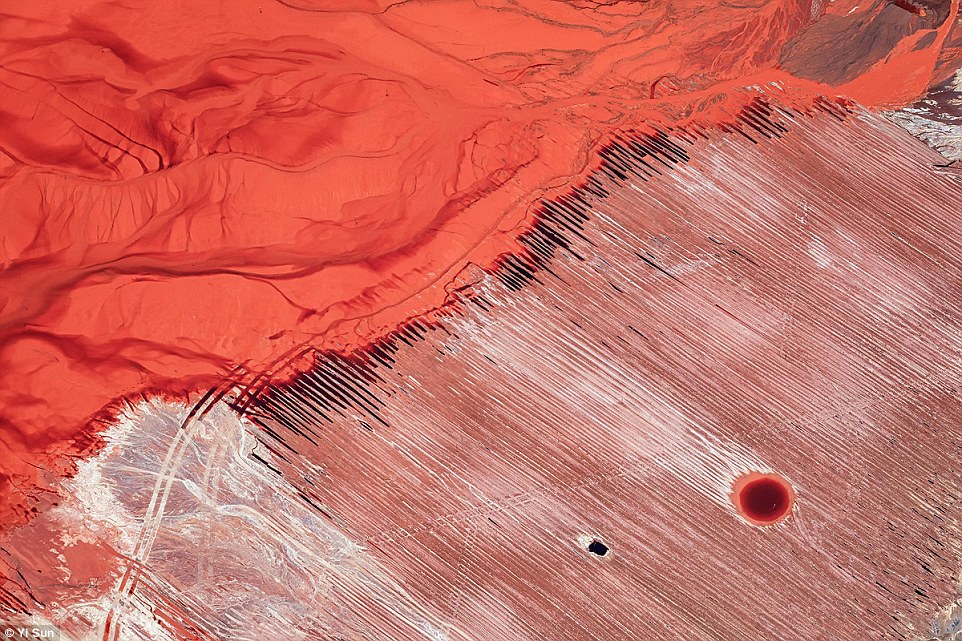 Cambridge based photographer Yi Sun has been shortlisted for his images of tailing ponds in Western Australia. Tailing ponds are the byproducts left over from mining and extracting resources from the oilsands or minerals. They contain toxic substances and heavy metals such as lead, copper, and mercury, and have huge environmental impacts on the surrounding air, land, water, vegetation and wildlife. Sun calls the structures Earth’s ‘bleeding tears’ 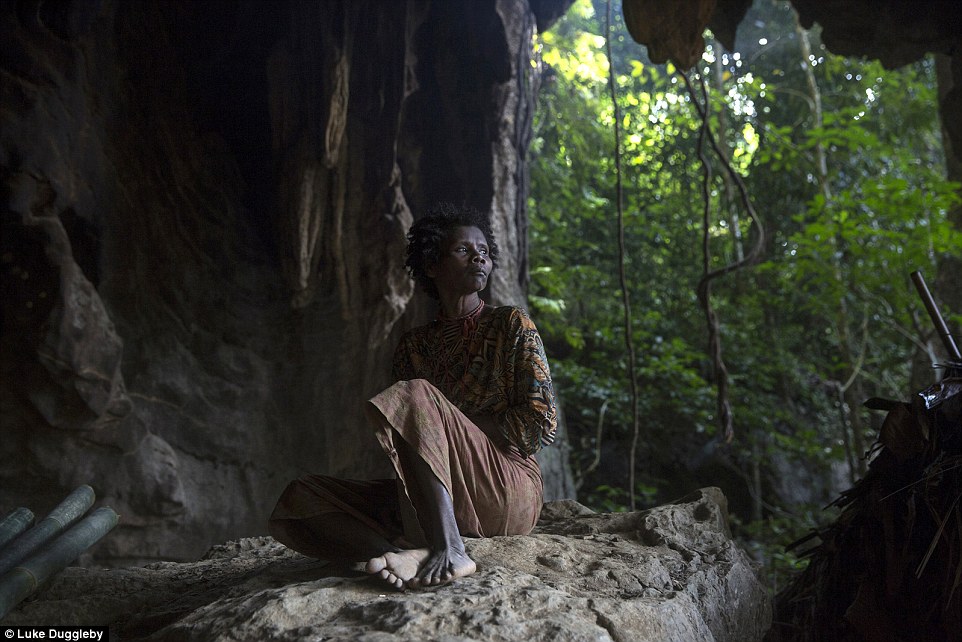 Luke Duggleby captured images of the people of the Banthat mountain range. Jin sits looking out of the cave. The Maniq, numbering no more than 350 people, are all that remains of this indigenous tribe. But still to this day they still hunt for animals in the forest using a blowpipe and poison arrows and sleep under shelters made of sticks and leaves. They speak their own unique language and have extensive knowledge of the medicinal benefits of the plants around them. 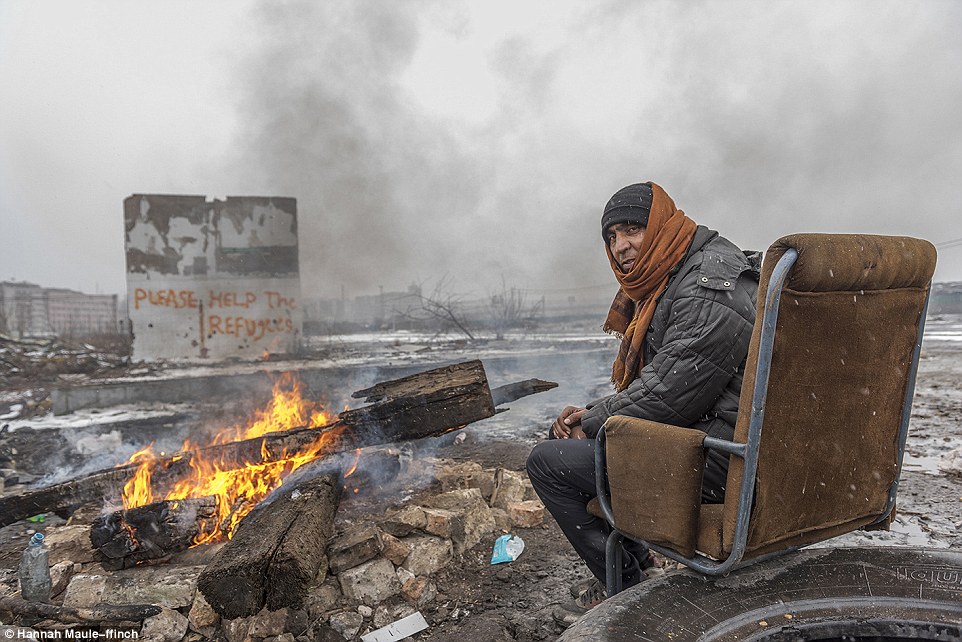 Hannah Maule-Ffinch took this image of a refugee in Belgrade, Serbia under her ‘Barracks of Belgrade’ project. The freelance photographer captured migrants and refugees attempting to stay warm during plummeting temperatures

Marissa Roth, Earth Photo selector said: ‘It was a sincere pleasure being a selector for the inaugural Earth Photo competition, as the submissions as a whole were very strong in terms of artistic merit, technical ability and topical relevance. I congratulate all of the photographers for entering their inspired work and thank them for supporting this important photographic competition.’

Prizewinner categories include people, nature, place, and change, as well as the Next Generation Award and the Short Film Award.

The competition is a collaboration between Forestry Commission England and the Royal Geographical Society and its aim is to enable a better understanding of the world around us. 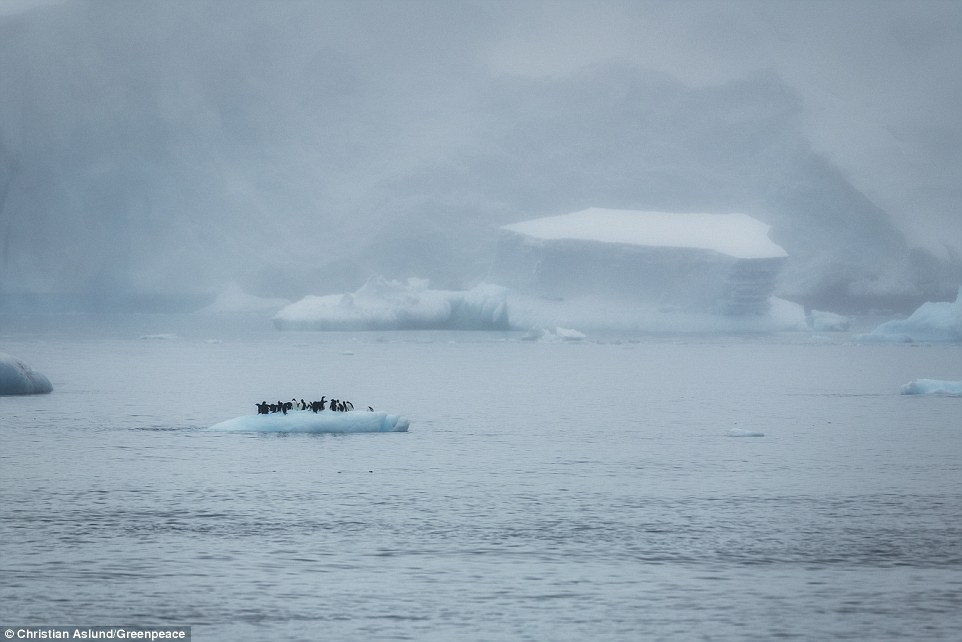 Adélie Penguin colonies standing on an ice floe in Hope Bay, Trinity Peninsula on Antarctica. Just outside Hope Bay, the Antarctic Sound connect the Bransfield Strait to the Weddell Sea. In this area, Greenpeace is conducting submarine-based scientific research to strengthen the proposal to create the largest protected area on the planet, an Antarctic Ocean Sanctuary. This image was taken by Christian Aslund 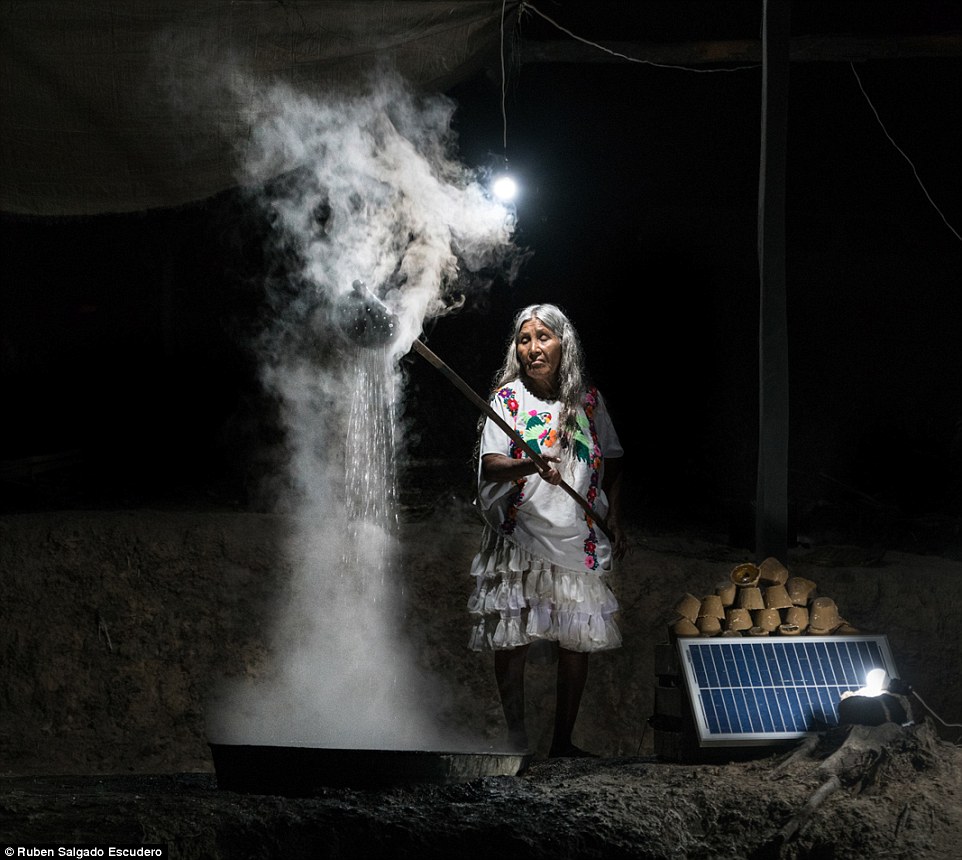 Maria Magdalena Carmen Mendoza, 70, makes ”Panela”’ or ”Piloncillo” at her home in Llano Silleta, Guerrero Mexico. Panela is unrefined whole cane sugar, which is a solid form of sucrose derived from the boiling and evaporation of sugarcane juice. The photo was submitted by Ruben Salgado Escudero 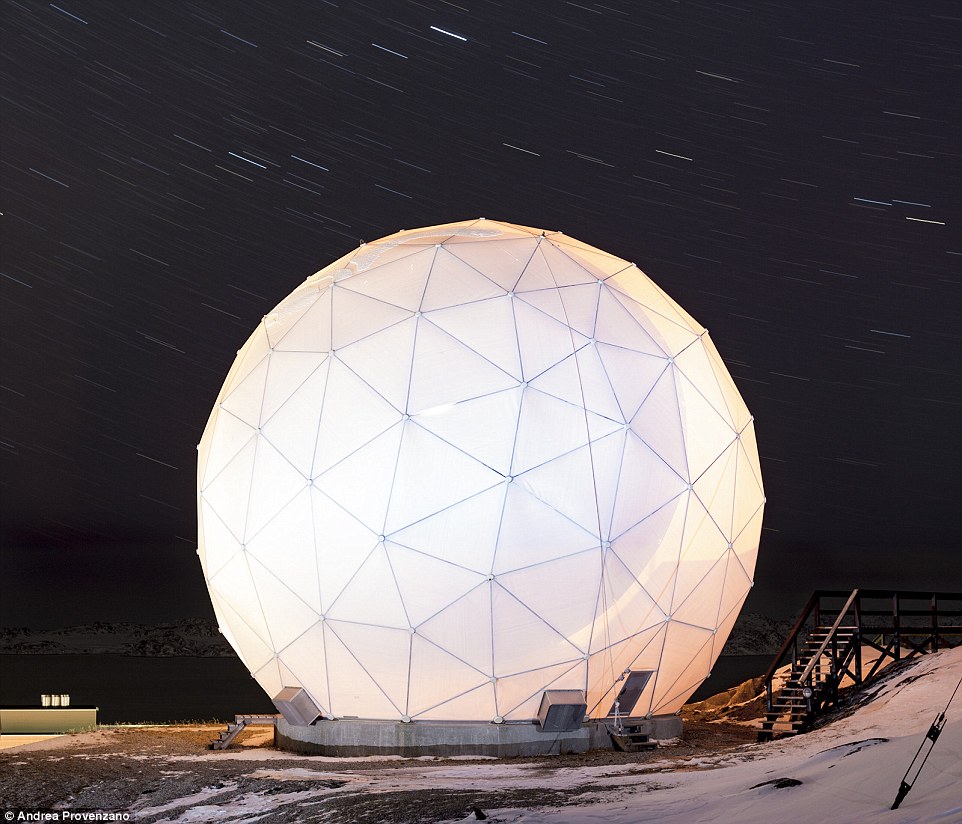 Documentary photographer Andrea Provenzano captured an image of the TELE-POST communication hub in Nuuk, Greenland. His project ‘Light Down Below’ explores changed in the Arctic area including how Silicon Valley companies want top relocate server farms to the wilderness 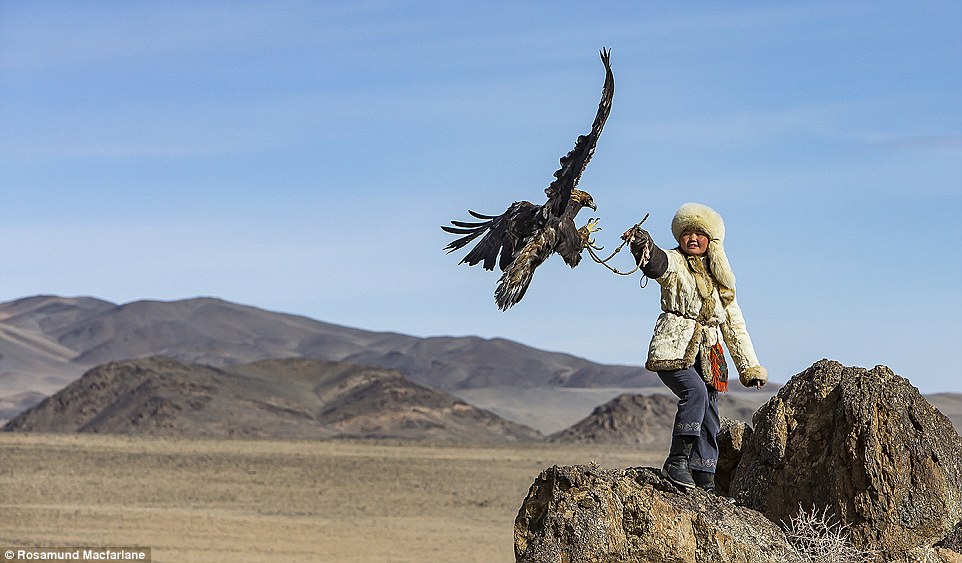 Rosamund Macfarlane’s Eagle Huntress has also made the shortlist. The photographer whose work has been seen before in the Wildlife Photographer of the Year exhibition captured the stunning shot of an eagle with a woman in the Altai Mountains of Mongolia 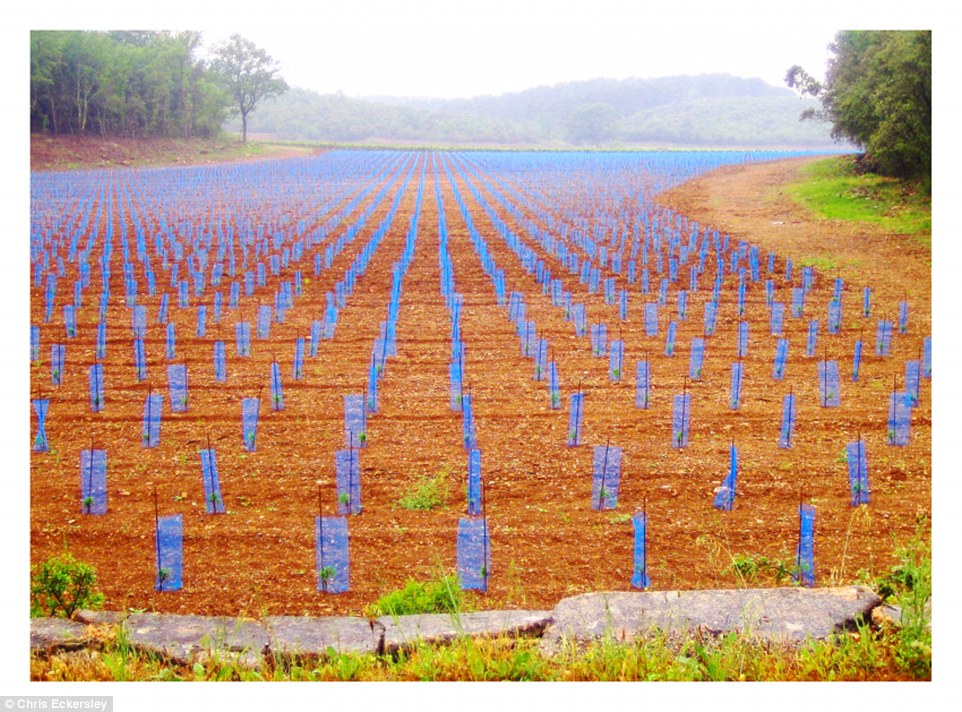 Birmingham based Chris Eckersley has also made it to the final with his ‘blue field’ image taken in Salernes, France, in 2017. The area is famous for its stunning lavender fields which attract tourism from around the world 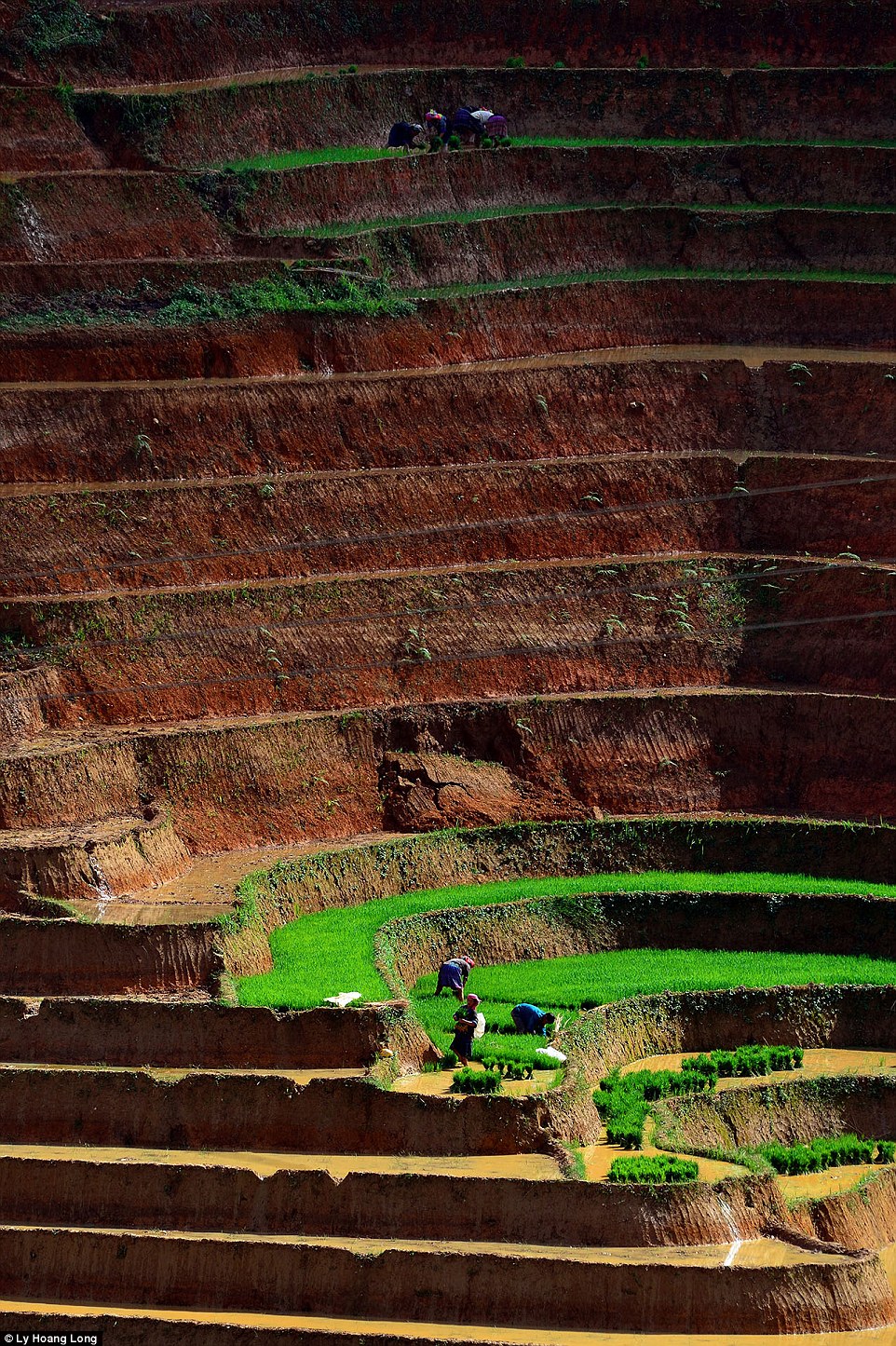 A stunning shot of field workers in the Yen Bai fields in Vietnam was submitted by Hoang Long Ly. Workers from the province can be seen in the staggered rice fields 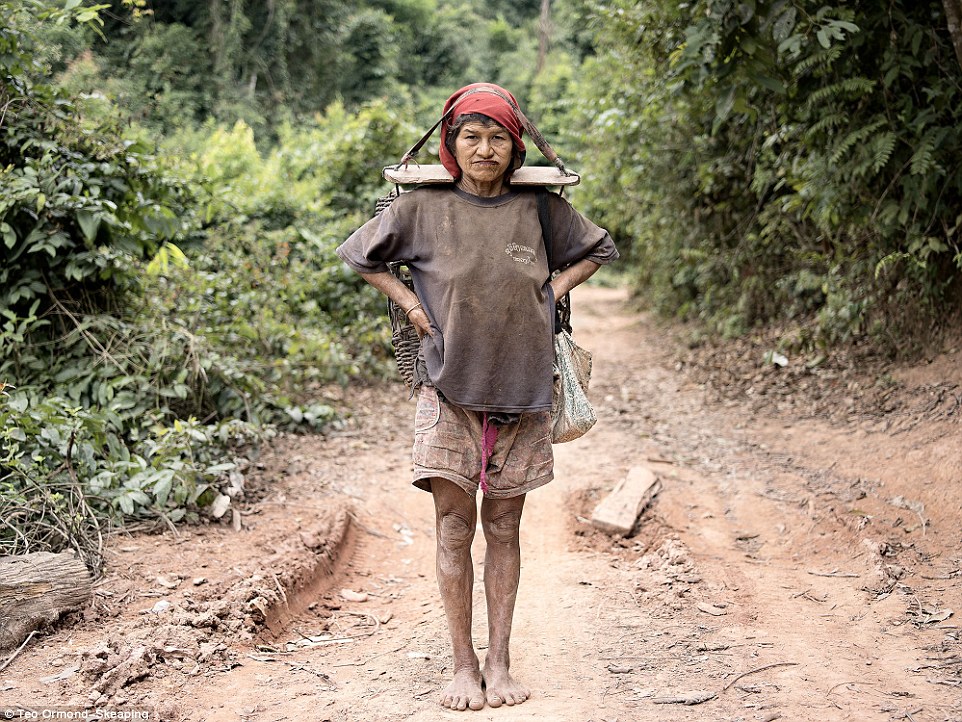 ‘A portrait of resilience’ was taken by Teo Ormond-Skeaping Akha Village, Luang Namtha in Lao. Akha villages are located in the hills and are often reached by trekking. The area near the Chinese border remains practically untouched by modernity 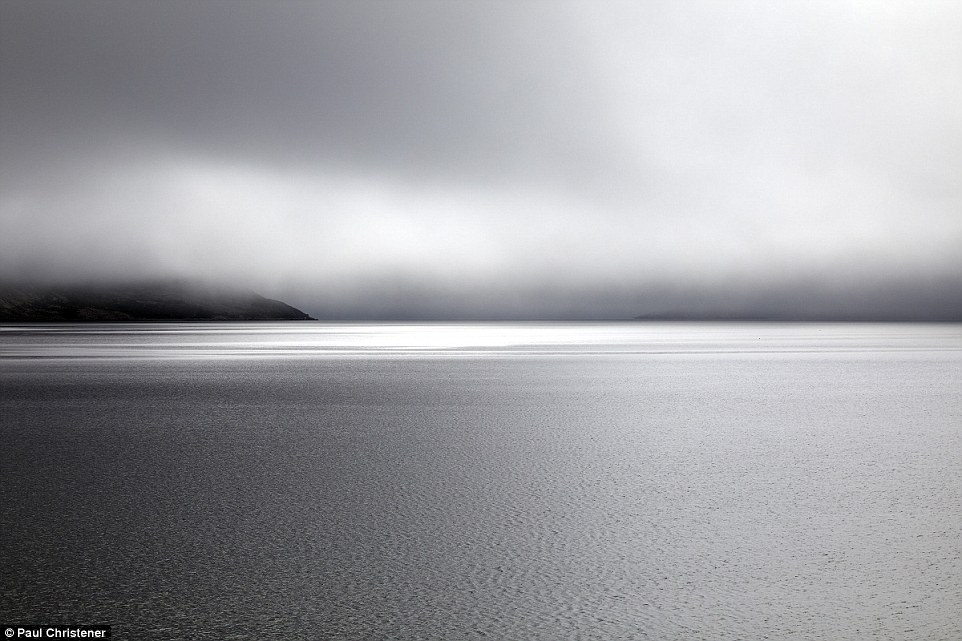 ‘In Search of Silence’ was taken by Paul Christener in Greenland. Mr Christener said: ‘We are exposed to the noise of civilization, even in remote places. I noticed this during our first trekking tour in western Greenland when my wife and I were completely alone with our backpacks, our tent, and our food for weeks. There’s nothing but an empty landscape.’ 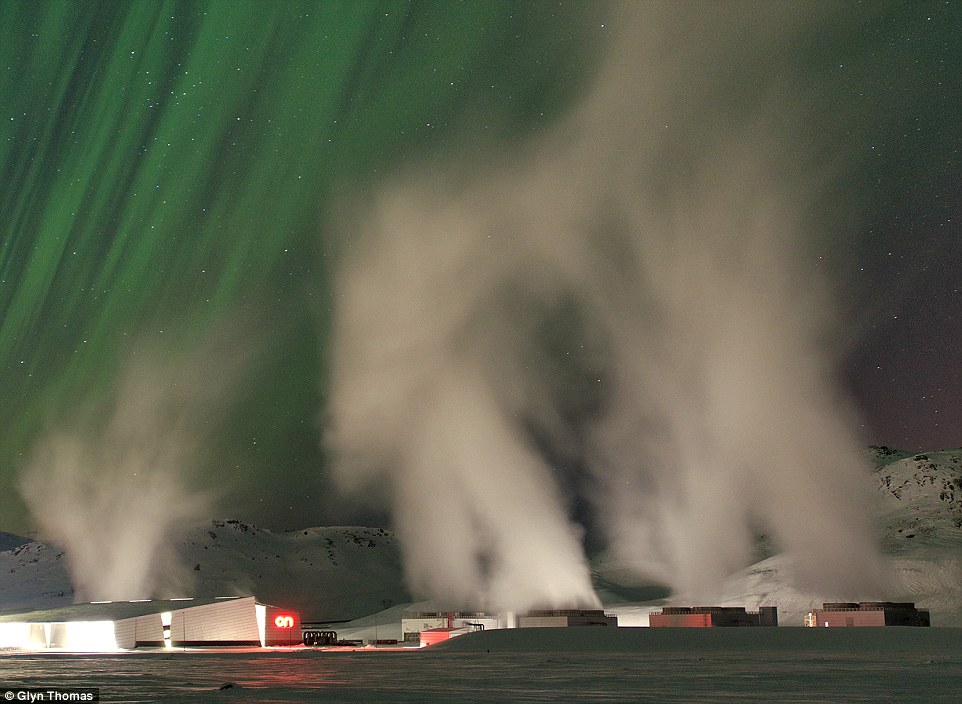 Glyn Thomas took an incredible shot of Hellisheidi Geothermal Power Station in Iceland with the Northern Lights overhead. His image has been selected as one of fifty for the final of the Earth Photo competition 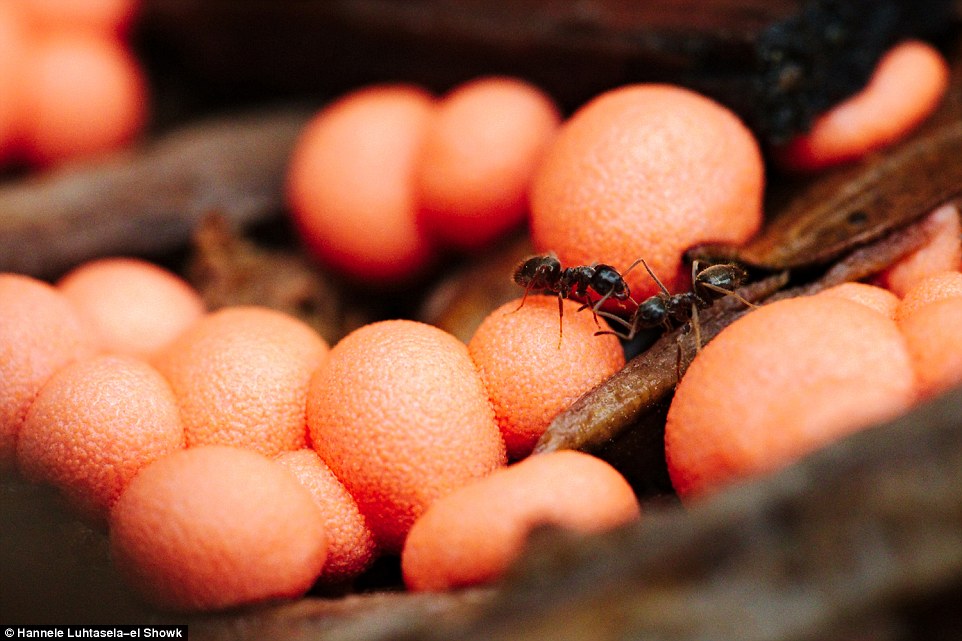 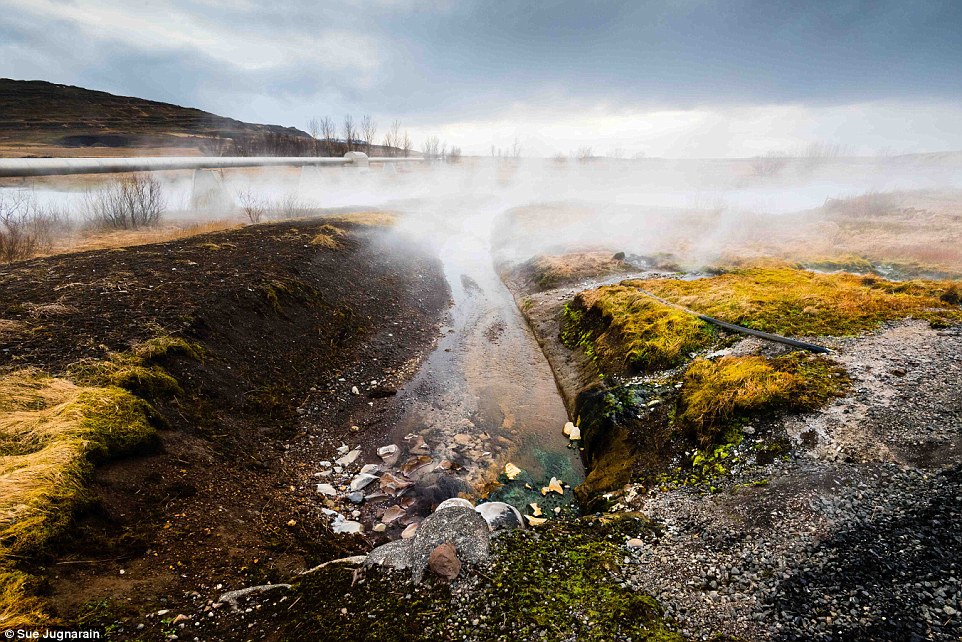 Sue Jugnarain’s Earth Energy collection intends to illustrate the ‘power of the Earth and the ever-changing volatile landscape it creates’. Her images taken in Iceland feature Myvatn, an active volcano basin, and the Silfra fissure, a chasm filled with crystalline freshwater which has formed where the North American and Eurasian tectonic plates are gradually separating 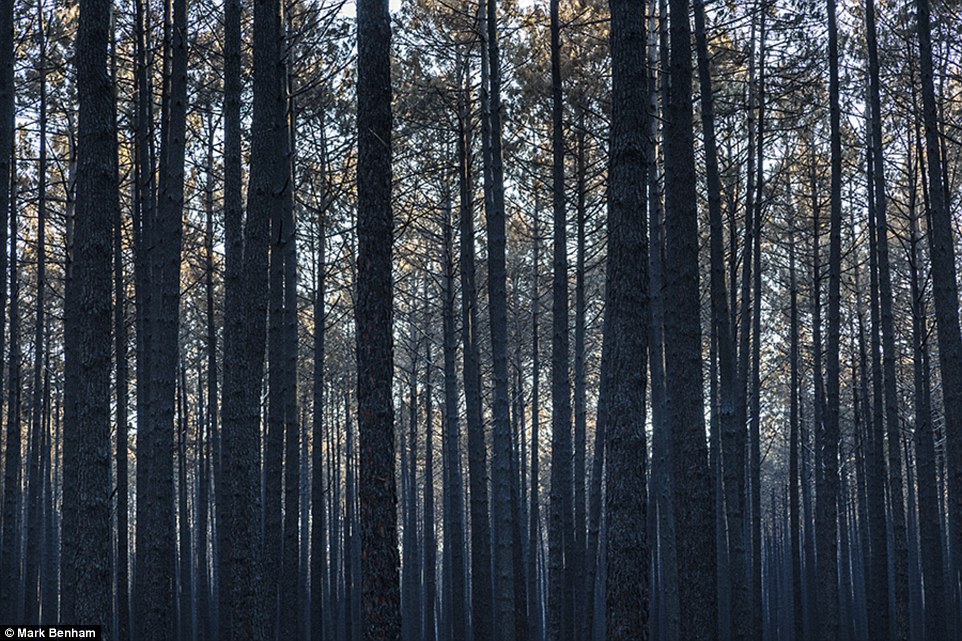 Mark Benham’s ‘burnt aftermath’ documents the increasing frequency of forest fires in Portugal as a result of rising global temperatures, with images of blackened woodland 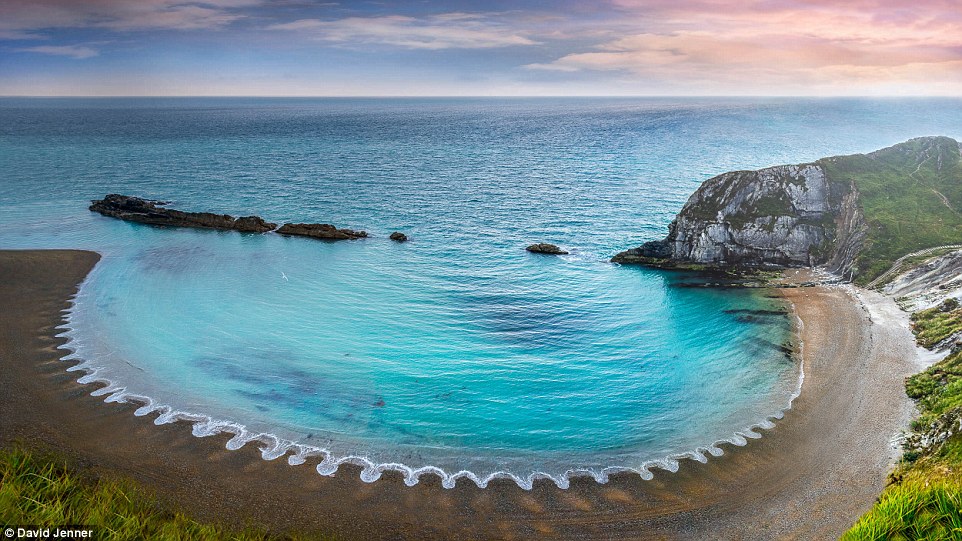 David Jenner’s work focuses on the UK. He captured this stunning image of a turquoise inlet on the Dorset coast. Other images by Mr Jenner were taken in the Lake District 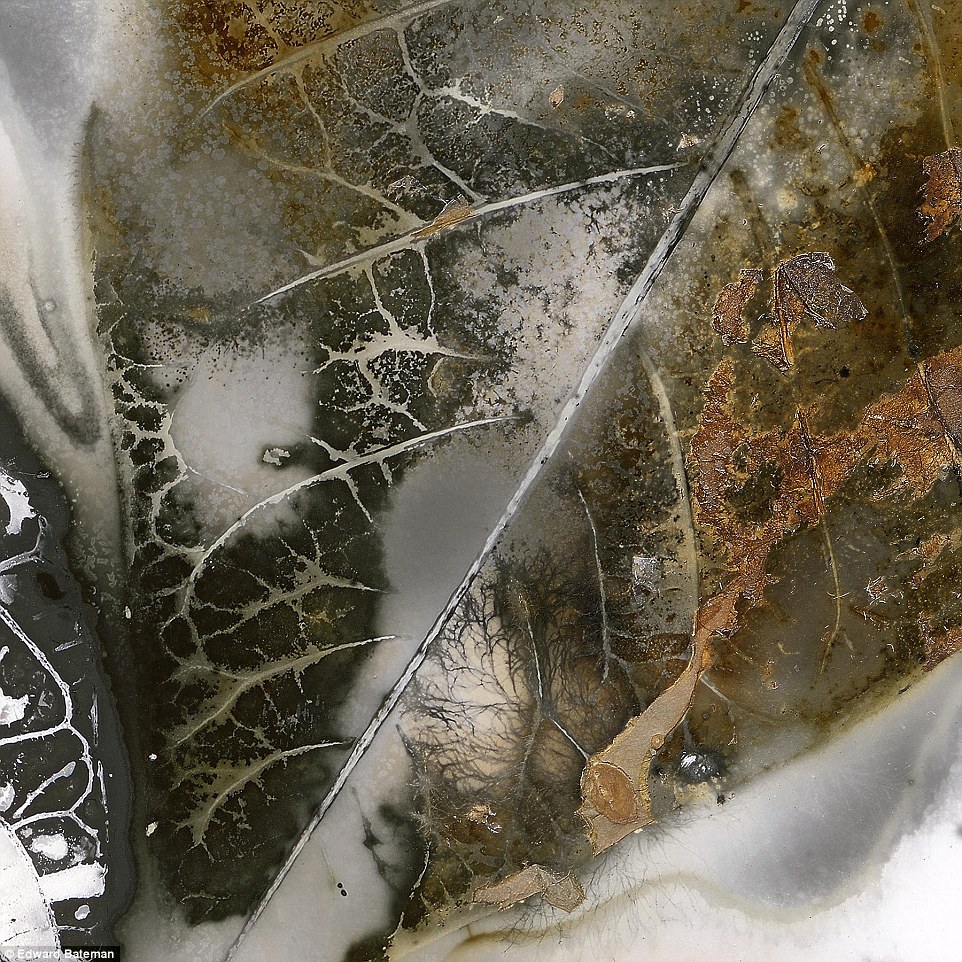 Edward Bateman’s ‘Reversing Photosynthesis’ images were made photographically without the direct interaction of light. He captured leaves in various stages, resulting in an incredible look at the natural process through time

Earth Photo will move to Forestry Commission England venues including Bedgebury Pinetum in Kent, Forest of Dean, Gloucestershire and Grizedale Forest in Cumbria later this year.