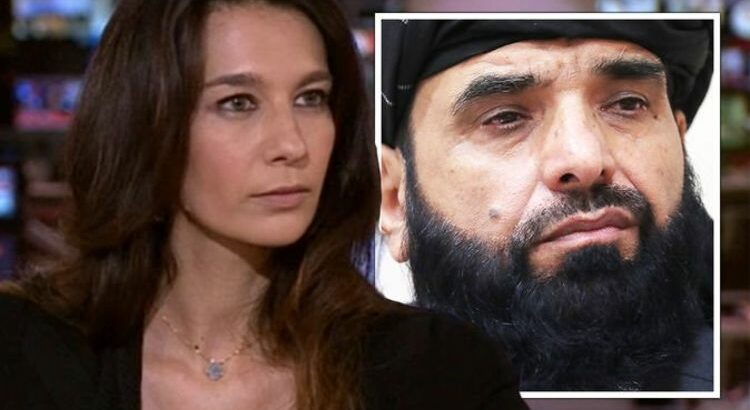 Taliban spokesperson Suhail Shaheen was invited onto the BBC to discuss the group’s future plans in Afghanistan following weeks of conflict and power struggles across the country. In a rare insight into the group, Mr Shaheen attempted to calm the nerves of the international community and those living in Afghanistan, pleading for those trying to evacuate to stay and said they are “servants of the people”. BBC journalist Yalda Hakim interrogated the terror chief after he rang her mobile phone, leaving her to desperately scramble to try and get him heard on a microphone as she ad-libbed questions for as long as she could while she had him on air.

Speaking on BBC News, Mr Shaheen was grilled over the Taliban’s goals in the first public communication the group has had with the UK since the violence erupted in Afghanistan.

Ms Hakim simply asked what would be the next steps for the Taliban as powers begin to slowly accept the reality they will take control of Afghanistan once again.

Ms Hakin added there were reports of atrocities being committed in Afghanistan provinces that mirrored their rule in the 1990s and wondered what had changed for the group despite Mr Shaheen calling for a “peaceful transfer of power”.

Mr Shaheen explained fighters who are carrying out atrocities on the ground will be punished when the new courts and laws are put in place.

Ms Hakim asked whether that would include public beatings or executions to which the spokesperson stuttered and said that would be down to whatever the court decides once power is taken.

Mr Shaheen added: “Over the next few days, we want a peaceful transfer of power.

“Secondly, people will be able to resume their normal [lives]

“Thirdly, there is no revenge on all those who are working with the Kabul administration or with the foreign forces.

“We want all embassies to continue their work, there will be no risk to diplomats or to anyone.

“All should continue as if they were continuing in the past.”

Mr Shaheen was also grilled over the future of women in the country as many feared a call back to oppressive rules over them.

Reports suggest many women have been raped during the Taliban’s conquest with the subjugation of their rights expected to be curtailed once the Taliban gain power.

When presented with reports of brutality leaving thousands of civilians displaced, Mr Shaheen claimed the fighters responsible would be “punished” in accordance to the policy and law after the group regained power.

He added over the next few days would be a “new chapter” for Afghanistan as he once again urged people to stay and not evacuate from Kabul or the rest of the country.