This is the dramatic moment a baby elephant is rescued after it became stuck on its back after falling into a narrow ditch.

The video was shot by an onlooker who said that the elephant had been struggling with it’s four legs in the air for nearly three hours before she was saved by a rescue team.

Indian Forest officials rushed to rescue the animal after villagers reported hearing cries from the calf and discovering that she was unable to get up.

The team were called to the scene in the Haridwar district in west India and hatched a plan to dig a hole with a JCB digger so that the elephant had space to get up.

The calf can be seen with it’s four legs in the air as it frantically tries to free itself. The officials hatched a plan to use a digger to dig more space for the calf to manoeuvre

The footage shows the calf struggling as the JCB digs a bigger hole next to the struggling elephant to broaden the ditch.

Eventually as the hole widens, the calf manages to roll over and get back on her feet. 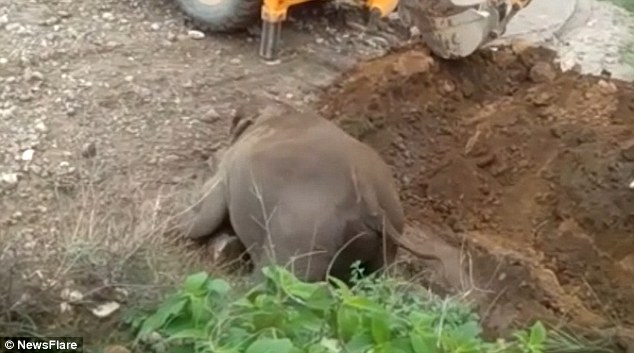 Once she is free to get up, she slowly gets onto her feet and runs off. A forest official said that she was later reunited with the rest of her herd

She then can be seen shuffling out of the ditch and was reportedly later reunited with the rest of her herd.

A forest official, Komal Singh said: ‘The elephant herd was returning to the forest after raiding a farm when the calf fell into a ditch and got trapped. She was lucky she was spotted on time.’