Don’t moove! Indian men volunteer to be trampled on by a herd of cows to bring luck and prosperity to their town

Indian men volunteered to be trampled on by a herd of cows to bring luck and prosperity to their town.

The traditional ritual shows devotees participating in the event in Ujjain of Madhya Pradesh in India.

A huge crowd can be seen gathered who have come to watch the event as some can be seen joining in and throwing themselves on the ground.

Shortly as the men lie on the ground with their body facing downwards, the cows arrive in herd and crosses over their bodies trampling them one by one on their backs.

The men continue to remain lying still as the heavy animals pass over their body.

Cows then cross the mark after passing over the bodies of the men. 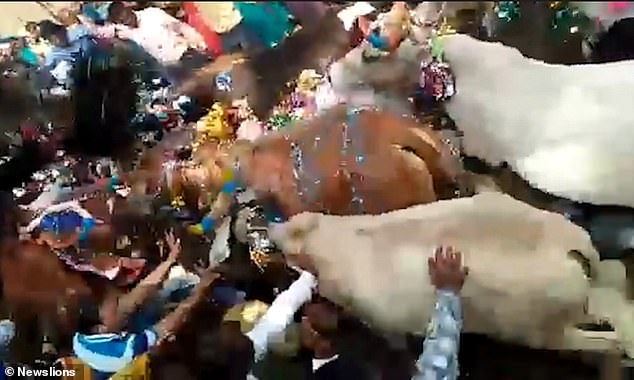 The ritual is to mark the Ekadashi,the eleventh day of each of the two lunar phases, which follows a day after the Hindu festival Diwali.

The ritual takes place after the cows are decorated with garland and henna.

Although many people are injured in the incident, they believe volunteering themselves in the ritual would heal them of their problems and pain.

According to the devotees, the ritual not only heals them of their problems but also bring prosperity and wealth to their family.

In India and Hinduism, cows are considered to be holy and sacred. 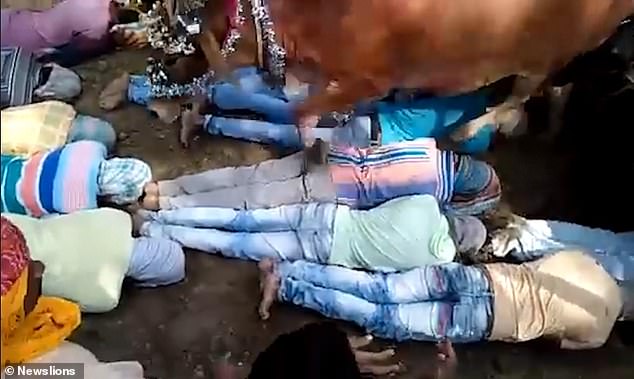