An Indian police officer hailed as a ‘hero’ for saving a Muslim man from a furious lynch mob has received death threats in the wake of his actions.

A clip showing Gagandeep Singh, an officer in the northern state of Uttarakhand, saving a man accused of attempting to convert his Hindu girlfriend to Islam went viral this week after being shared on social media.

In the footage, Mr Singh can be seen shielding the man from a violent crowd who are attempting to beat him despite the officer’s protection.

The man, who was visiting a Hindu temple with his girlfriend, was accused by other worshippers of ‘love jihad’. 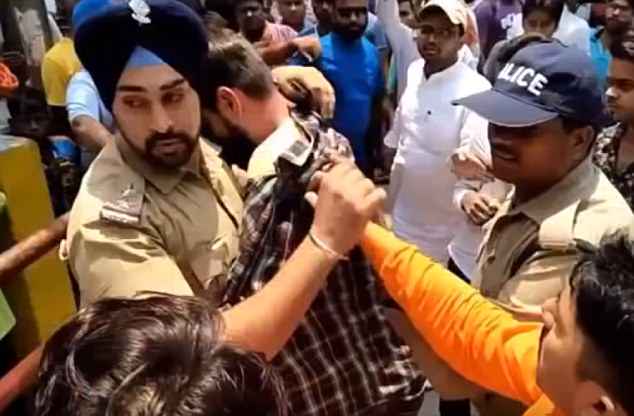 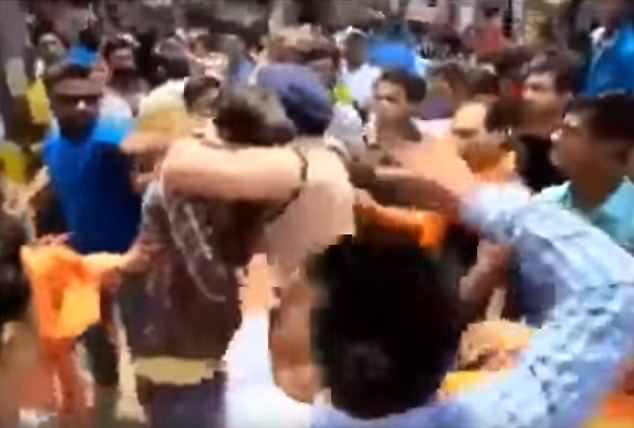 Religious groups coined the phrase to describe Muslims who allegedly seduce Hindu women to convert them to Islam.

Sikh officer Mr Singh was widely praised on Twitter for his ‘heroic’ actions – after he successfully managed to help the man escape the baying crowd.

‘The Sikh police officer who saved the Muslim man. I don’t care who’s in power or what is your politics. That’s the India I want and ever will want. Even if I am the only one left wanting it,’ Indian novelist Chetan Bhagat tweeted.

While actor Farhan Akhtar added: ‘We are quick to condemn those who take a life but we must be quicker to commend those who save one. #hero #GagandeepSingh’

Mr Singh himself spoke out after the fracas – saying he was surprised by the reaction to the video and was ‘just doing his job’.

‘I was just doing my duty. Even if I was not in uniform, I would have done the same thing and every Indian should do the same,’ he told local media in India.

‘I never thought that the video would go viral and I would get so much appreciation and love. I was just doing my job and I will be happy if my action can inspire others.’ 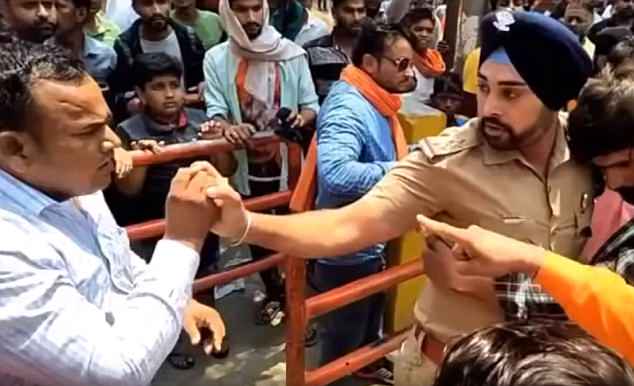 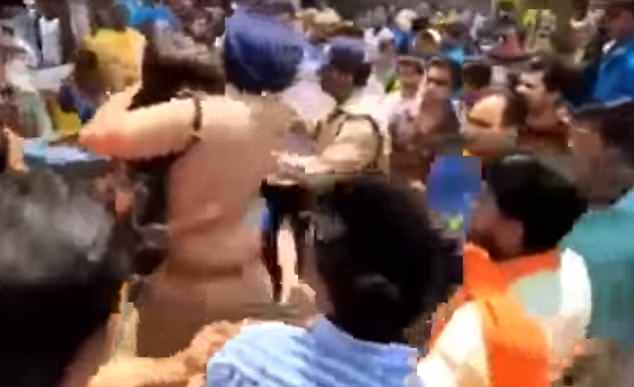 But several people condemned Mr Singh’s actions, adding that the mob were justified in their rage.

Rakesh Nainwal a high ranking Indian politician told the BBC: ‘It’s wrong when these people (Muslim men) bring Hindu girls to our places of worship despite knowing it’s a temple and it’s pious.’

Rajkumar Thukral, another politician, said: ‘We don’t go to mosques because we don’t have the right to go there.’

‘Then why did these men go to our temple with an intention to destroy the Hindu culture?’

Police officials working with Mr Singh have said the policeman has received a number of death threats and has now been sent on leave as a result.