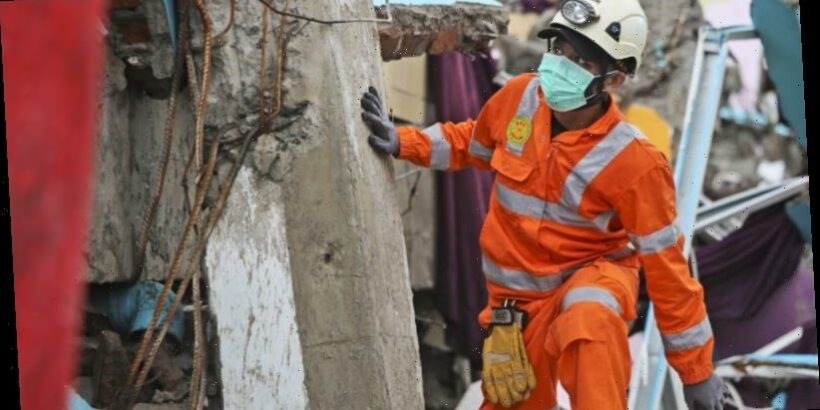 Mamuju: Indonesian rescuers have retrieved more bodies from the rubble of homes and buildings toppled by Friday’s strong earthquake, raising the death toll to at least 78, while military engineers managed to reopen ruptured roads to clear access for relief goods. 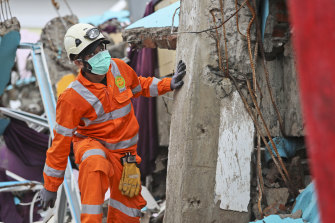 A rescuer inspects the ruin of a building flattened by an earthquake during a search for victims in Mamuju, West Sulawesi, Indonesia, on Sunday.Credit:AP

A total of 67 people died in Mamuju and 11 in Majene, said the director of preparedness for the National Search and Rescue Agency, Didi Hamzar. AFP reported 81 people have died.

Power supplies and phone communications have begun to improve in the quake areas.

Thousands of people were left homeless and more than 800 were injured, with more than half of them still receiving treatment for serious injuries, Jati said. 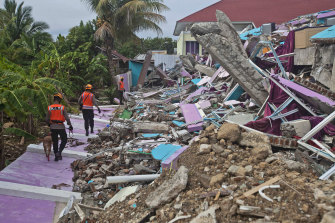 Members of police K-9 squad lead a sniffer dog during a search for victims at a hospital building collapsed in Friday’s earthquake in Mamuju, West Sulawesi.Credit:AP

Volunteer coordinator in Majene, Takdir (who like many Indonesians uses only one name) said some victims were still believed to be under collapsed buildings such as the Mitra Manakarra hospital.

The disaster agency’s data showed that nearly 27,850 survivors were moved to shelters. Most of them went to makeshift shelters that have been lashed by heavy monsoon downpours. Only a few were lucky to be protected by tarpaulin-covered tents.

They said they were running low on food, blankets and other aid, as emergency supplies were rushed to the hard-hit region.

“We are unable to return to our destroyed homes,” said a father of three who identified himself only as Robert. He said he fled from his bed while being treated at Mamuju’s Mitra Manakarra hospital, which was flattened by the quake. He and his family are among thousands of displaced people who took shelter in a hilly area.

He said his bed was shaking when he awoke and realised that it was an earthquake. He then removed a drip from his hand and ran out. He had seen several nurses helping patients who were unable to move before the building collapsed.

“I cried when I saw the hospital where I was being treated collapse with people still inside. I could have died if I got out late,” he said.

Rescuers managed to retrieve four survivors and four bodies from the rubble of the flattened hospital, according to the Search and Rescue Agency.

Jati said that at least 1150 houses in Majene were damaged and that the agency was still collecting data on damaged houses and buildings in Mamuju. 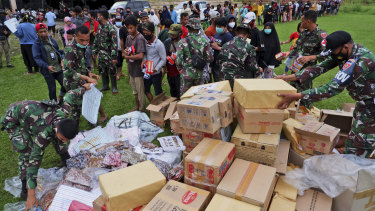 Indonesian soldiers distribute aid for those affected by the earthquake at a stadium in Mamuju on Sunday.Credit:AP

Mamuju, the provincial capital of nearly 300,000 people, was strewn with debris from collapsed buildings. The governor's office building was almost flattened by the quake and a shopping mall was reduced to a crumpled hulk.

The disaster agency said the army corps of engineers cleared the road connecting Mamuju and Majene that had been blocked by landslides. They also rebuilt a damaged bridge.

The disaster agency’s chief, Doni Monardo, said authorities were trying to separate high and lower-risk groups and provided tens of thousands of masks for refugees to prevent the spread of the coronavirus in the crowded camps. He said authorities would also set up health posts at the camps to test people for the virus.

People being housed in temporary shelters were seen standing close together, many of them without masks.

“In this emergency situation […] it is difficult for us to observe health protocols," said Fatimah Zahra, a Mamuju resident who moved to a makeshift shelter.

West Sulawesi province has recorded more than 2500 cases of the coronavirus, including 58 deaths. Indonesia has confirmed nearly 908,000 cases and almost 26,000 fatalities.

Separately, five people were killed and 500 others were evacuated after floods and landslides in Manado city in North Sulawesi province on Saturday. One other person was missing.

As of Sunday, 39,549 people had been evacuated and at least 15 had been killed due to floods that affected 10 districts and cities in South Kalimantan province on Borneo island.

Seasonal rains and high tides in recent days have caused dozens of landslides and widespread flooding across much of Indonesia, a chain of 17,000 islands where millions of people live in mountainous areas or near fertile flood plains close to rivers.