‘Every day was like a party’: Inmates at lawless Birmingham prison bragged they could get away with anything because there were no repercussions

On the morning of December 16, 2016, hundreds of inmates in HMP Birmingham – the Category B prison this week taken out of private sector control following a devastating report on conditions and its management – went on a 15-hour rampage.

What started with a guard being threatened for his keys with a syringe full of potentially ‘infected’ blood was later described as the worst UK jail riot for a quarter of a century, causing £6million of damage. 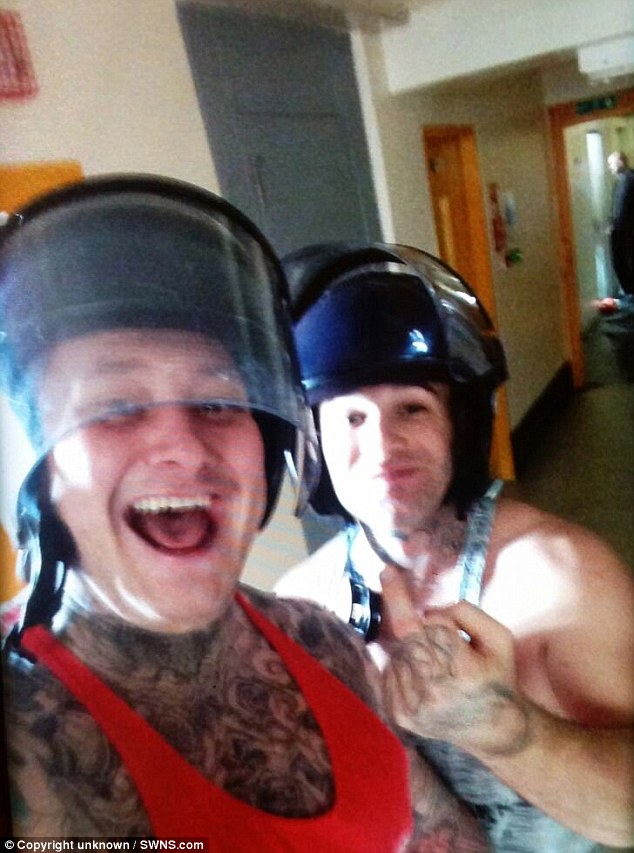 One of them could be heard crowing: ‘Outta control!’

An official investigation into the riot was told by one prisoner that ‘every day was a party’.

‘There was too much freedom,’ he said. ‘We like freedom but there weren’t enough staff to deal with it. You weren’t made to do anything, no discipline, no structure… you couldn’t find any staff.

‘No law, no order. You knew there would be no repercussions. So nothing to stop you. They let us get away with anything. But boredom leads to badness.’

Published yesterday, following a Freedom of Information request, the official report concluded the disturbance ‘should have been prevented’.

It found the ‘protest’ by prisoners was unplanned and due to a number of factors including a loss of control on the prison wings, guards worn down by chronic staffing shortages, high levels of sickness and poor deployment of staff by managers.

The report by the Chief Inspector of Prisons, Peter Clarke, suggests little if any improvement at Birmingham since 2016 – as relatives of inmates who spoke outside the prison yesterday confirmed.

According to Aisha Ali, partner of inmate Mohammed Waqas, 24, from Alum Rock, Birmingham, there was an incident over the weekend and ‘[my partner] was assaulted by six inmates on two separate occasions. They recorded the incident on a phone and within 15 minutes of the assault the video went all over the internet,’ she said.

‘He has a broken nose and two black eyes and he’s been left in really dangerous conditions, it’s really difficult for us to speak to the prison authorities.’ Disturbances erupted across four wings of the prison, and around 500 inmates were released from their cells (Pictured, a member of the ‘Tornado Team’ covered in paint)

An inmate who was leaving the jail said: ‘I’ve just spent six weeks in there…Drugs have taken over the prison and G4S have just let it happen. The prisoners were in control…There were a lot of people on my wing that just stayed behind the door because they were scared to come out.’

A former member of staff present at the gate recalled that ‘the smell of cannabis was there all through the day…The prisoners were running the jail. One day four prisoners at the top of one landing said “what are you doing here”. To me that meant “we are running this place”.’

The Ministry of Justice has now brought in a new governor with 30 years’ experience to turn the prison around. He is Paul Newton, the former governor of HMP Swaleside, another Category B establishment on the Isle of Sheppey in Kent.

That is the same jail which witnessed its own riot in December 2016, when 60 inmates took over their wing and ran amok. Riot-trained staff had to win it back.

And have there been major improvements there? Again, not much it seems.

Earlier this year, the prison, which was built in 1988, was described as a ‘simmering volcano’ by a local news site.

Apparently nicknamed ‘Stab City’ by its 1,100 inmates, it was said to be plagued by extreme violence and bullying, much of which was blamed on the prevalence of the synthetic cannabinoid drug known as ‘spice’. 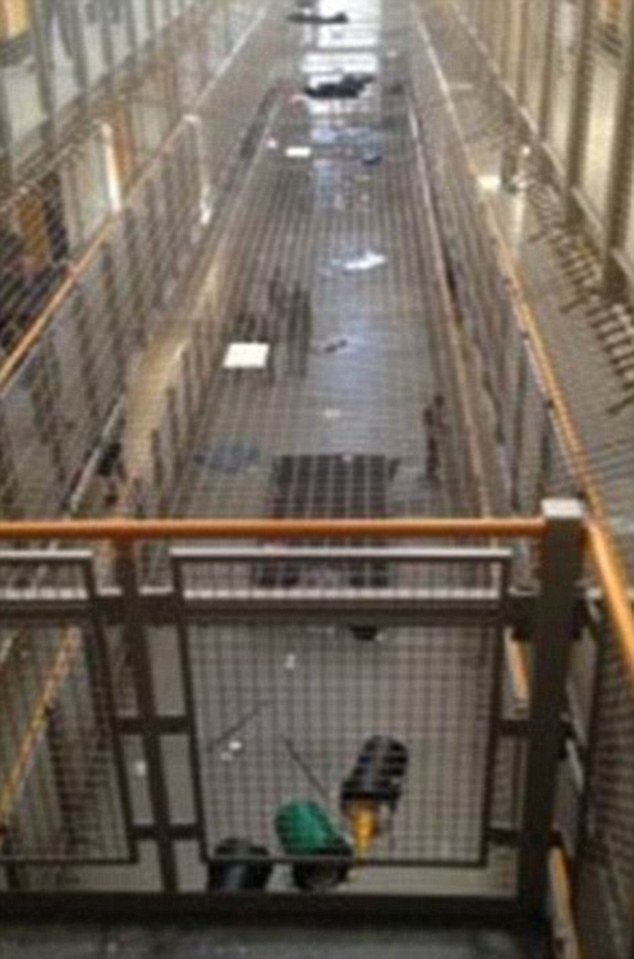 The 15-hour riot began with a guard being threatened for his keys with a syringe full of potentially ‘infected’ blood (Pictured, inside the prison)

Incidents of self-harming have rocketed. A 2016 report described it as ‘not a safe prison’.

Certainly that is the experience of Dave Todd, a serving prison officer of 28 years who is now the vice-chairman of the Prison Officers’ Association.

He recalls a particularly gruesome incident which took place while he was on duty. A former infantry soldier who had served three tours of Northern Ireland, Mr Todd describes himself as ‘resilient’, but even he was shaken by what he found in the kitchens of HMP Swaleside.

An inmate was lying in a pool of blood. He’d been ‘slit from navel to chest cavity’ by another prisoner wielding a meat knife.

The victim’s heart had stopped and had to be massaged back to life through the gaping wound by staff. Eventually, an air ambulance arrived and the casualty was taken away.

Meanwhile, Mr Todd and his colleagues cleaned up and got on with their shifts.

All in a day’s work for the dwindling front-line staff inside Britain’s prisons, now overcrowded to ‘tipping point’, according to Mr Todd. His personal experience, combined with regular visits to British prisons in the course of his POA duties, paints a bleak picture of life on both sides of frontline where bullying, violence and drug dealing are rampant; intimidation of staff widespread, and there is easy access for inmates to mobile phones and weapons.

The causes put forward by Mr Todd are supported by a number of official reports.

In the last decade, successive governments have sought to make ever deeper cuts in the prison service budget, he says. Private sector costs – 14 prisons in England and Wales are under private control – have been used as a ‘benchmark’ for the remaining public sector jails.

As a result the number of frontline prison officers has fallen – by more than 6,000 between 2010-16 – with many encouraged to go by a voluntary early retirement scheme introduced in the last decade.

He describes it as a ‘hollowing out’ of the relative veterans who knew how to make overcrowded prisons run without serious breakdowns in discipline or order.

‘Now you have officers who do not have a vast amount of experience being asked to do the impossible,’ Mr Todd says. ‘In some London jails they have two officers in charge of 80 prisoners, who they have to unlock, escort off the landings, out of the wing and into the exercise areas. 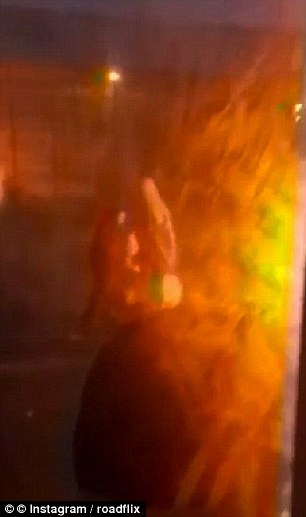 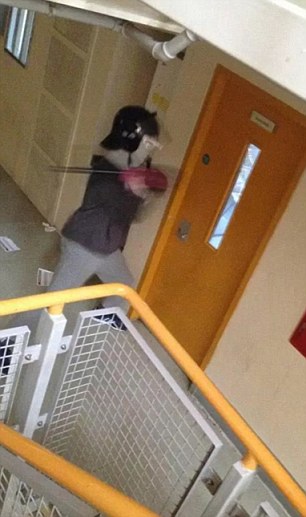 A report of the riot, published yesterday following a Freedom of Information request, said the disturbance ‘should have been prevented’

‘These are Victorian jails and the exercise yards are next to public roads which are within easy reach of ‘throw-overs’. (The practice of contacts on the outside hurling illicit items such as drugs, phones and weapons over the perimeter walls.)

‘The throw-overs are well co-ordinated,’ Mr Todd says. ‘The prisoners simply get into a huddle and the items are divided up. Any officer who tries to intervene risks being beaten to a pulp. They are being overwhelmed.

‘The staff demographic has changed. They are now recruiting young people from what I call the “X-Box generation”. They are not as resilient as before. I came from the armed forces and even then I felt quite daunted to walk into a prison for the first time.

‘Some of the officers now are only 18 years old. They have no life skills. They are being put at real physical risk.’

He says that many of the prisoners are in the gym three or four times a week and bodybuilding steroids are also smuggled into jails. 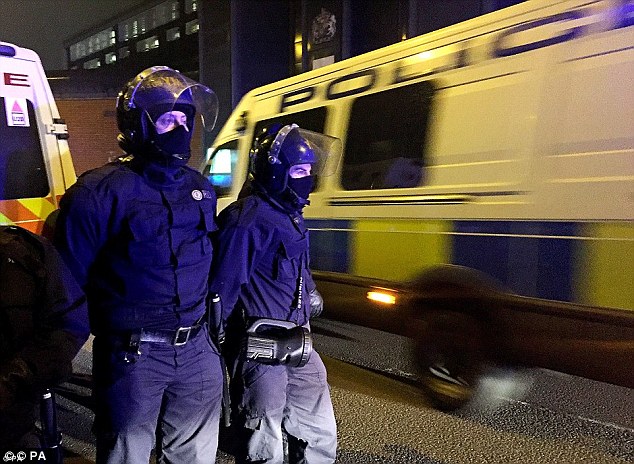 ‘Physically they are intimidating and they are acting in consort. Against those people there is not a lot a couple of young inexperienced officers can do.’ Gang violence and intimidation within jails has increased in line with the problem of ‘chronic understaffing’.

‘It is particularly serious in London and the South-East,’ says Mr Todd. ‘[Inmates] stick together so that if one becomes involved in trouble they are all involved. Fights for the control of drug dealing are common.

‘Some prisoners are making more money on the inside than they ever did when free. The trade in illicit materials is massive and the prices paid are sometimes three or four times what would be paid on the street. 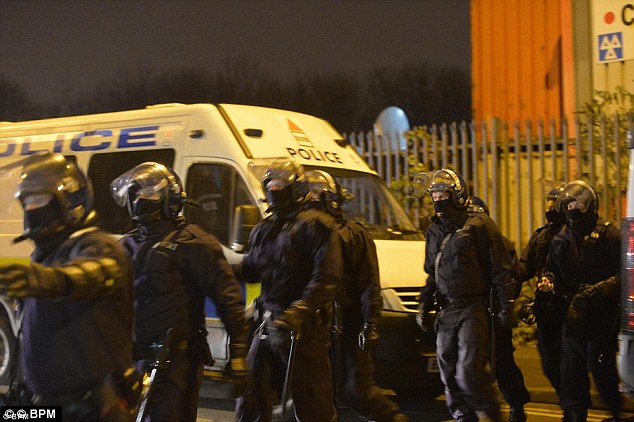 ‘One of the most volatile times of the week is Friday prayers when rival Muslim gangs come together. The violence can be horrendous.’

Meanwhile, ‘throw-overs’ are increasingly being replaced by drone deliveries, the new mode of contraband transportation, according to the POA.

Phones smuggled in for inmates can be synched with drones so prisoners control the final moments of a delivery. The drugs ‘literally fly into their hands’.

The Government has yet to invest in the available technology to block phone signals within jails, Mr Todd complains. That neglect only undermines discipline and good order.

And when serious violence does occur the first responders – the prison staff – are inadequately equipped. Officers are issued with batons but don’t have stab vests, says Mr Todd. Pepper spray is being trialled at four jails – yet has been available to the police for years

‘It’s a very dispiriting time,’ he says. ‘Over the past decade we have seen a rise in mental health issues such as post-traumatic stress disorder among prison officers.

‘Everybody deals with incidents in their own way. Some will be fine first time round, but at some point later the pressure might tip them over the edge.’