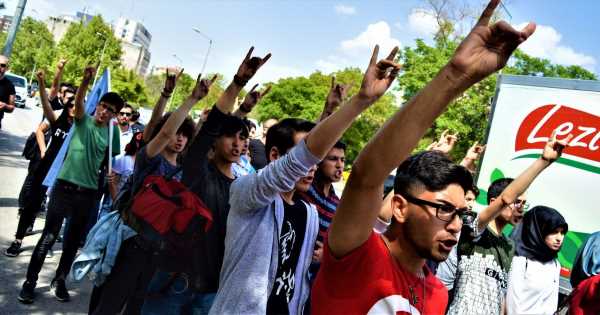 The Grey Wolves have marred the beautiful game with allegations that 29-year-old Everton striker Cenk Tosun this weekend used a hand gesture linked to the far right movement as part of a goal celebration.

The sportsman has vehemently denied he was making a political statement on the pitch – and many may consider the hand gesture in question, which sees the middle and fourth finger pinched to the thumb and the index and pinkie finger raised skyward, as being much more related to heavy metal than far right politics.

However, the debate around the hand gesture has shone a spotlight on the Grey Wolves – who have already been banned in France, and hand gestures linked to the group have been outlawed in Austria.

The Grey Wolves are an organisation from Turkey who are officially known as Idealist Hearths and are regarded as a far-right, ultranationalistic, neo-fascist group.

They were established in the late 1960s and founded by Alparslan Türkeş – who was leader of Turkey's Nationalist Movement Party, with the Grey Wolves effectively an unofficial military wing of the political party.

The group drew attention in the 1970s when they engaged in urban guerrilla warfare tactics that killed thousands amid political unrest in Turkey that spread into the 1980s.

The group has been linked to the attempted assassination of Pope John Paul II in 1981, the killing of Armenians in Turkey, and linked to the Turkish mafia.

The group aims to unify Turkic people from across Asia and Russia and claims to be, according to Aljazeera, a: “cultural and educational movement that was pan-Turkist, secular” and loyal to the teachings of Turkey’s founder, Mustafa Kemal Ataturk.

However, they have been accused across Europe of trying to whip up hate between Turkish people and other ethnic minorities – particularly Greeks and Armenians.

Aljazeera reports the organisation has been accused in France of setting up training camps where Turkish youths were subjected to propaganda promoting “an ideology tending to discriminate or even provoke violence against people of Kurdish and Armenian origin”.

The group was officially banned in France in November last year following the vandalism of an Armenian Genocide Memorial which was defaced with pro-Grey Wolves graffiti.

The group is also considered a far-right hardline group by German security forces and there is growing pressure from European parliaments, including that of Holland’s, to ban the group across the EU.

Further to the Grey Wolves’ violent history are links to illegal drugs sales – with American security services reporting in the 1980s that the group was a main trafficking heroin from Turkey to Western Europe.