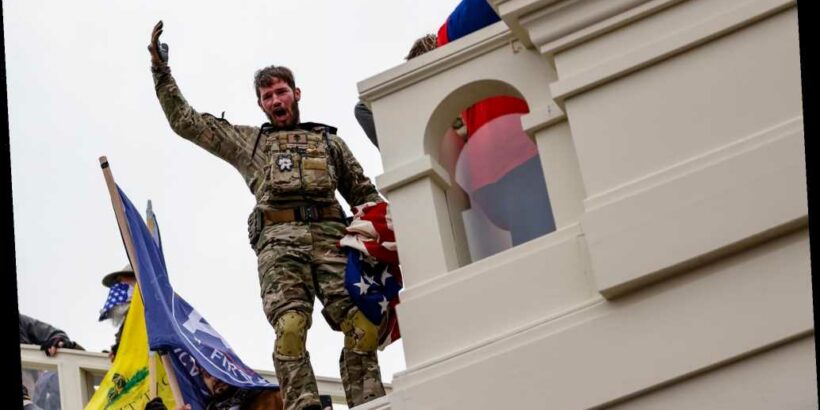 The Jan. 6 insurrection on Capitol Hill and the extent to which current or former service members participated it served as a wake-up call to the Defense Department, Pentagon officials have said. DoD has been, however, aware of the encroachment of domestic extremism in the ranks in recent years, and has made several reports to Congress examining both instances of extremism and how they can combat it.

Several of the suggestions involve working more closely with the FBI, which has been sounding the alarm about the dangers of domestic extremism.

That would include running questionable recruit tattoos through the FBI’s database, creating a consistent definition of domestic extremism for reference across the services, giving an unclassified version of the FBI’s in-house domestic extremism training, as well as consulting other agencies about updating Standard Form 86, which the federal government uses to build background checks.

The only recommendation DoD hasn’t started to implement is the suggestion to create a military separation code that would indicate domestic extremism as a cause for discharge, which would not only inform potential employers of past activities, but give DoD a way to centrally track the number of service members booted for it.

The report, a requirement of the 2020 National Defense Authorization Act, is one of several made to Congress over the last few years. Still, Jan. 6 brought the stark reality of the issue into plain view.

“I obviously can’t speak for what the previous administration did, but you’ve heard the secretary talk about this, when he was a lieutenant colonel,” Pentagon spokesman John Kirby told Military Times on Monday, when asked how veterans’ participation in the riot could have come as a surprise, given that DoD has been aware of domestic extremism in its ranks for years. “It’s not like it’s a new problem.”

DoD is facing a threat from domestic extremists, particularly those who espouse white supremacy or white nationalist ideologies, according to the Office of People Analytics report submitted in June.

“I think what Jan. 6 brought to light … is how much it is still a problem, and certainly within the veteran community,” Kirby said.

A Pentagon official, speaking on background, said as much to reporters in the days after the insurrection, adding that DoD was well aware that extremist groups not only target veterans, but encourage their followers to enlist for the free weapons and tactics training.

As one of his first moves after taking office, Defense Secretary Lloyd Austin called for a stand-down to be completed by all units by early April.

The Pentagon’s personal and readiness directorate could not confirm whether the domestic extremism separation code is still under review, but Kirby said that the department is “willing to take a wide look,” at not just the vetting process for preventing radicalized recruits from joining up, but whether “radicalizers are in the ranks and affecting their colleagues.”

The report does not include the number of recruits denied accession due to extremist ties, though it does say out of roughly 400,000 recruited every year, 250,000 complete the process and sign contracts.

“Using the tools available, we believe we have been effective at screening for individuals who possess or advocate extremist ideologies, or actively participate in extremist groups, and we continuously review our policies, practices, and methods for improvement,” the report says.

In addition to updating its screening forms and diversifying how it does background checks, the Pentagon is looking into a process for scanning online activity that would suggest domestic extremist ties or sympathies.

But the authors cautioned against investing too much in one of the existing software programs that is designed to search for questionable online activity, as aliases are common in that community.

“Despite a low number of cases in absolute terms, individuals with extremist affiliations and military experience are a concern to U.S. national security because of their proven ability to execute high-impact events,” according to the report.

The stand-down is the first step in DoD’s new philosophy on confronting the extremism issue, though it remains to be seen what kind of data will be collected and what kinds of hard-and-fast regulation will come out of it.

“The stand-down is still ongoing ― we’re beginning to learn from that. He has not made any specific policy decisions yet,” Kirby said of Austin. “This is something that he wants to have an iterative, ongoing discussion with the service secretaries and the chief about.”