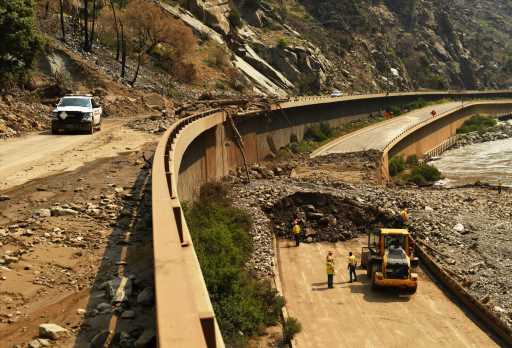 Interstate 70 through Glenwood Canyon remains closed in both directions because of safety concerns around the ongoing wet weather, including a flash flood watch.

“The burn scar area in Glenwood Canyon has received significant precipitation since the closure last night, though no new mudslides or damage have been reported,” CDOT said in a Thursday news release. “The closure will remain in place due to an unusually high uncertainty with the forecast, including abrupt shifts this morning. The flash flood watch in place now could turn into a flash flood warning quickly.”

At about 2 p.m. Thursday rain was falling in the canyon and the humidity level was 77%, according to the National Weather Service.

“A system moving across the region, in addition to monsoonal moisture, will support strong thunderstorms capable of producing heavy rainfall this afternoon through Thursday evening,” the weather service said in the flash flood watch posting. “This watch includes the Grizzly Creek and Lake Christine Fire burn scars.”

Rain gauges throughout the area have measured over an inch of rain in several locations, CDOT said Thursday afternoon. Drivers are strongly urged to use the recommended northern alternate route. Westbound drivers from the Denver area should exit I-70 at Exit 205 (Silverthorne) and travel north on Colorado 9 toward Kremmling. Travelers will continue west on US Highway 40 and then south on Colorado 13 to complete the alternate route and return to westbound I-70 at Rifle (Exit 90). Eastbound travelers can detour using the same route in reverse.