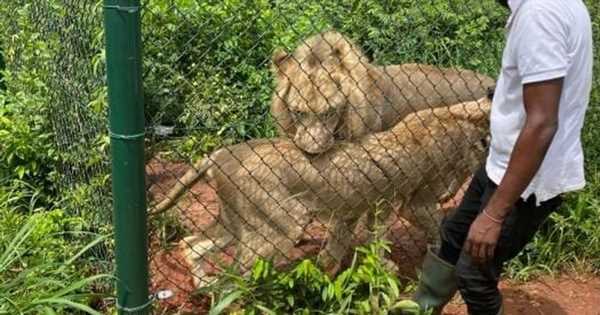 A man has been mauled to death by a lion after he attempted to steal a cub by sneaking into their zoo enclosure.

The intruder, who is believed to be in his 30s, was killed by the predator after he hopped over the security fences at Accra Zoo in Ghana.

Officials confirmed that staff discovered the man's lifeless body inside the enclosure on Monday afternoon.

State agency the Forestry Commission said: "The intruder was attacked and injured by one of the lions, within the inner fencing of the enclosure."

It has been reported that the lion, a lioness and two cubs were found secure in their enclosure after the horrific attack. According to Joy Online, the man broke into the area so he could take an animal.

Despite the claims, officials said the intruder's motive was yet to be determined, reports Daily Mail.

The man's body was retrieved and taken to a nearby morgue after zookeepers lured the animals into a security hole.

A police spokesman said: "We're investigating the case to establish how the man got into the restricted area."

The Forestry Commission said officials had since visited the attraction "to ensure all facilities remain secure".

The Accra Zoo was first established as a private menagerie in the early 1960s by Ghana's first president Kwame Nkrumah. The Accra Zoo was opened to the public after he was overthrown in 1966.