Paris reportedly proposing billions of dollars in credit lines to Tehran but deal could hinge on US approval. 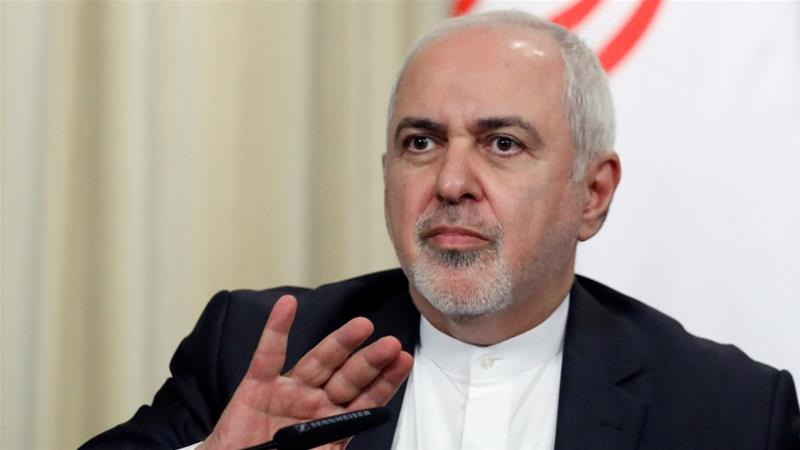 Iranian Foreign Minister Javad Zarif has warned that Tehran would further cut its commitments under a 2015 nuclear deal unless European states acted to save the pact by Thursday, but that this did not mean the “end of talks”, Iranian news agencies reported.

Zarif said late on Tuesday that President Hassan Rouhani would soon announce details of the cuts, according to the semi-official news agency ISNA.

“Implementation of this step does not mean the end of talks,” he added.

France has proposed offering Iran about $15bn in credit lines until year-end if Tehran comes fully back into compliance with the deal.

French Foreign Minister Jean-Yves le Drian said talks on the credit arrangement, which would be guaranteed by Iranian oil revenues, were continuing, but approval from the United States would be crucial.

The idea is “to exchange a credit line guaranteed by oil in return for, one, a return to the JCPOA (Iran nuclear deal)… and two, security in the Gulf and the opening of negotiations on regional security and a post-2025 (nuclear programme),” Le Drian told reporters.

“All this (pre)supposes that President Trump issues waivers.”

Le Drian added that there are still “lots to work out” and that negotiations are “still very fragile”.

European leaders have struggled to dampen brewing confrontation between Tehran and Washington since US President Donald Trump pulled out of the deal, which assures Iran access to world trade in return for curbs on its nuclear programme.

The US withdrew from the deal in 2018 and reimposed sanctions on oil — steps that signatories to the deal strongly opposed.

In response, Iran reduced some of the limits on nuclear material in the deal, and has set another deadline for Thursday to further downgrade its commitment.

For the United States to permit a credit line for Iran would contradict its stated policy of imposing “maximum pressure”, to force Tehran to rein in its nuclear and missile programmes as well as what Washington views as its destabilising regional behaviour.

A US State Department spokeswoman referred Reuters’ queries about France’s proposal to the White House, which did not immediately respond to a request for comment.

But in another sign of more US pressure against Iran, the US Treasury imposed sanctions on Tuesday against Iranian space agencies.

French President Emmanuel Macron has spent the summer trying to create conditions that would bring the sides back to the negotiating table.

At a G7 meeting in France last month, Trump appeared open to the idea of credit lines, though US officials later ruled out lifting sanctions as a condition for new talks.

An Iranian delegation was in Paris on Monday, including oil and finance officials, for talks to fine-tune details of credit lines that would give Iran some respite from sanctions that have crippled its economy and cut off its oil exports.

Talks on $15b credit

“The question is to know whether we can reach this $15bn level, secondly who will finance it, and thirdly we need to get at the very least the tacit approval of the United States. We still don’t know what the US position is,” a source aware of the negotiations told Reuters.

A senior Iranian official familiar with the negotiations said: “France has offered the credit line of $15bn but we are still discussing it. It should be guaranteed that we will have access to this amount freely and also Iran should be able to sell its oil and have access to its (own) money.”

A European diplomatic source confirmed the $15bn figure. Le Drian did not confirm the figure, saying it was an Iranian number.

In Washington DC, French Finance Minister Bruno Le Maire met US Treasury Secretary Steven Mnuchin on Tuesday, but a US Treasury statement about the meeting made no mention of Iran.

Earlier on Tuesday Rouhani said Iran would never hold bilateral talks with the United States but said that if all US curbs imposed on Iran were lifted, Washington could join multilateral talks between Tehran and the other parties to the 2015 pact.