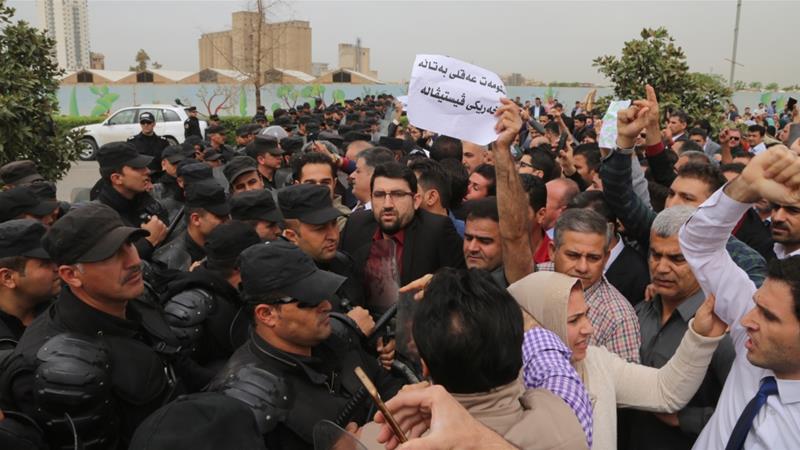 Erbil, Iraq – Government employees in the autonomous Kurdish region of northern Iraq, including teachers and doctors, have protested against austerity measures and salary delays for a fifth consecutive day.

The demonstrations began after a group of teachers called on other civil workers to protest peacefully after a strike by government staff earlier this month spread from Sulaymaniyah to other cities and towns.

Amid growing protests, senior Kurdish government officials held a meeting on Wednesday and vowed to change the current salary structure to meet the protesters’ demands.

Before 2014, the salaries of civil servants were paid for by the central government in Baghdad. However, the Kurdish government stopped receiving these payments after a series of disputes with Baghdad and the beginning of the war against the Islamic State of Iraq and the Levant (ISIL, also known as ISIS).

As a result, Kurdish civil servants are currently receiving just 25 percent of their salary, with the remainder being withheld to be paid at a later date.

“This is an important step, but it is still not everything,” Kurdish Prime Minister Nechirvan Barzani told reporters after Wednesday’s meeting.

“After the reform proposal, which is now in the parliament, I can say we will reach the step to completely end the payment withholding system.”

Still, about 100 protesters gathered on Thursday outside the Ministry of Higher Education in the capital, Erbil, shouting slogans such as “Our only weapons are our pens” and “We”ve had enough!”

Haval Abdulkhaliq, 46, director of the health and safety department at the Hawler Medical University, told al Jazeera that doctors could not continue doing their work under the current system.

“Baghdad is sending our salaries, but the Erbil administration still wants to keep the deduction system, which is not acceptable,” he said at the protest in Erbil.

Salma Mohammed, a 45-year-old teacher who has been protesting for the past several days, said: “I’m here to ask for my very right to serve my people and to live an honourable life”.

Meanwhile, there have been multiple reports of arrests and rights violations against protesters and journalists attempting to cover the protests.

In a statement released on Thursday, the Metro Center for Journalists’ Rights and Advocacy said that “besides preventing journalists from covering the scenes of violations, security forces carried out a broad campaign against those who have used their cameras and mobiles to cover the protests.”