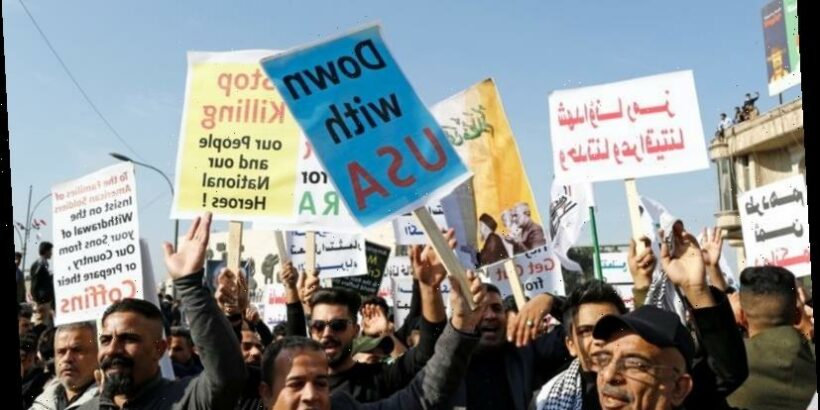 The gathering coincided with increasing tensions between Iran and the United States in the last days of President Donald Trump’s administration, and many in the crowd demanded revenge.

Soleimani, leader of an elite overseas unit of Iran’s Revolutionary Guards, was killed on Jan. 3, 2020, in a U.S. drone strike on his convoy at Baghdad airport, an attack that took U.S.-Iranian hostilities into uncharted waters and stoked concern about a major conflagration.

Washington had accused Soleimani of masterminding attacks by Iranian-aligned militias on U.S. forces in the region.

Demonstrators gathering at Tahrir square in response to calls by an assortment of militia groups known collectively as the Popular Mobilisation Forces (PMF), which are mostly backed and trained by Iran, waved the Iraqi flag and chanted anti-American slogans such as “America is the Great Satan”.

Reflecting continuing regional strains, Iranian Foreign Minister Mohammad Javad Zarif on Saturday urged Trump not to be “trapped” by an alleged Israeli plan to provoke a war through attacks on U.S. forces in Iraq.

An Israeli official dismissed the accusation as “nonsense” and said it was Israel that needed to be on alert for possible Iranian strikes on the anniversary of Soleimani’s death.

The United States blames Iran-backed militias for regular rocket attacks on U.S. facilities in Iraq, including near the U.S. embassy. No known Iran-backed groups have claimed responsibility.

The U.S. military flew two nuclear-capable B-52 bombers to the Middle East in a message of deterrence to Iran last week, but the bombers have since left the region.

On Saturday evening thousands of mourners gathered on the highway that leads to Baghdad airport, where Soleimani and Muhandis were killed, in a simulated funeral procession staged in tribute to the two men.