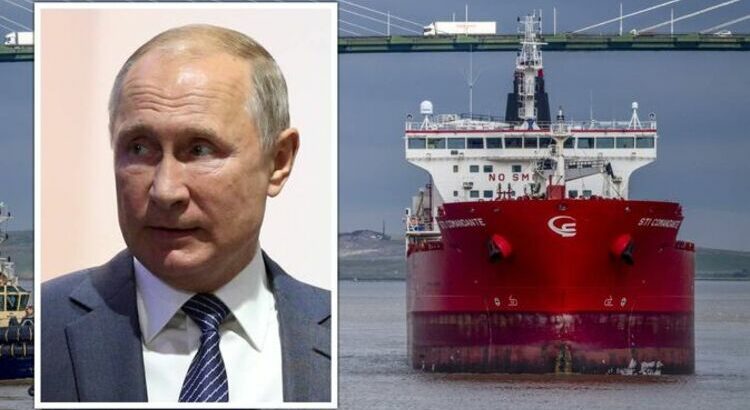 The fifth round of EU sanctions imposed over Russia’s invasion of Ukraine includes the port ban – but there are still significant gaps in the EU’s latest round of punishments for Russia. Russian ships are now barred from entering ports in Belgium, Bulgaria and Italy.

However, an EU statement on April 8 said “exemptions apply for medical, food, energy and humanitarian purposes, amongst others”.

Products that are still being allowed into EU ports from Russia include oil and gas, despite the EU’s vows to end its reliance on Russia.

Other products that come under the loophole include metals, wheat and grains, fertilisers, pharmaceutical products, and nuclear fuel for atomic energy.

The question of whether the EU can end its dependency on Russia has come under significant scrutiny in the months since the war broke out.

The EU has been slammed by President Zelensky and his supporters for not doing enough to end its reliance on Russian imports in support of Ukraine.

Last week, the Ukrainian leader condemned Germany, Hungary, and the wider EU, accusing them of making “money out of blood”.

He said: “We don’t understand how you can make money out of blood.

“Unfortunately, this is what some countries have been doing. European countries.

“For example and I’d like us to be frank, for example the oil embargo is I think one of the key issues which we know has been blocked by Germany and Hungary among European countries.

“And we need to talk together with these countries on how it’s possible for there to be different attitudes to this issue of the oil embargo within the European Union.

“The United States, the United Kingdom, some European countries – they are trying to help and are helping.

“But still we need it sooner, sooner and faster. The key word is now.”

Germany, Europe’s biggest economy, has been one of the most reticent to consider a total embargo on Russian energy imports – much to Mr Zelensky’s despair.

Chancellor Olaf Scholz has warned a sudden cut-off would plunge “all of Europe into a recession”.

However, Germany’s economy minister Robert Habeck has confirmed the country has already slashed its dependence on Russian energy since the war broke out in February.

According to Mr Habeck, Russian oil imports have come down from 35 percent to 25 percent, and gas imports from 55 percent to 40 percent.

Europe overall is divided on whether it should end its dependency on Russian fuels, with some states vowing to cut all energy ties permanently, and others refusing to enact sanctions at all.