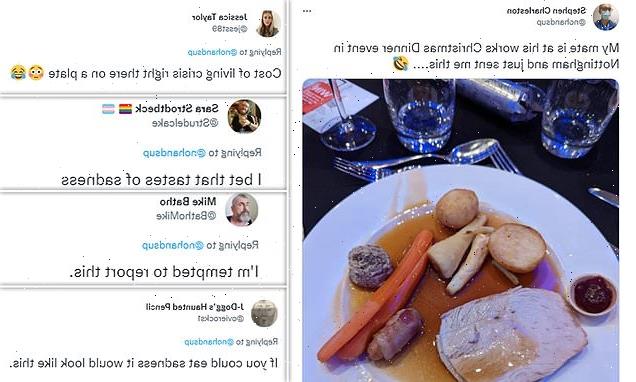 Is this Britain’s most MISERABLE Xmas dinner? Moribund mix of turkey and veg with just ONE pig-in-blanket is described as ‘sadness on a plate’ after being snapped at staff festive bash

A picture of a very sorry looking Christmas dinner served at a festive work do has sparked furore online with people branding it ‘sadness on a plate’.

The image was uploaded to Twitter by Stephen Charleston, a nurse, who said: ‘My mate is at his works Christmas Dinner event in Nottingham and just sent me this….’

The lacklustre meal was made up of just two roast potatoes, a measly slither of turkey, one pig-in-blanket and a few trimmings of carrot and parsnips on the side.

A tiny pot of cranberry sauce also accompanied the dish, which was swimming in a meagre pool of gravy. 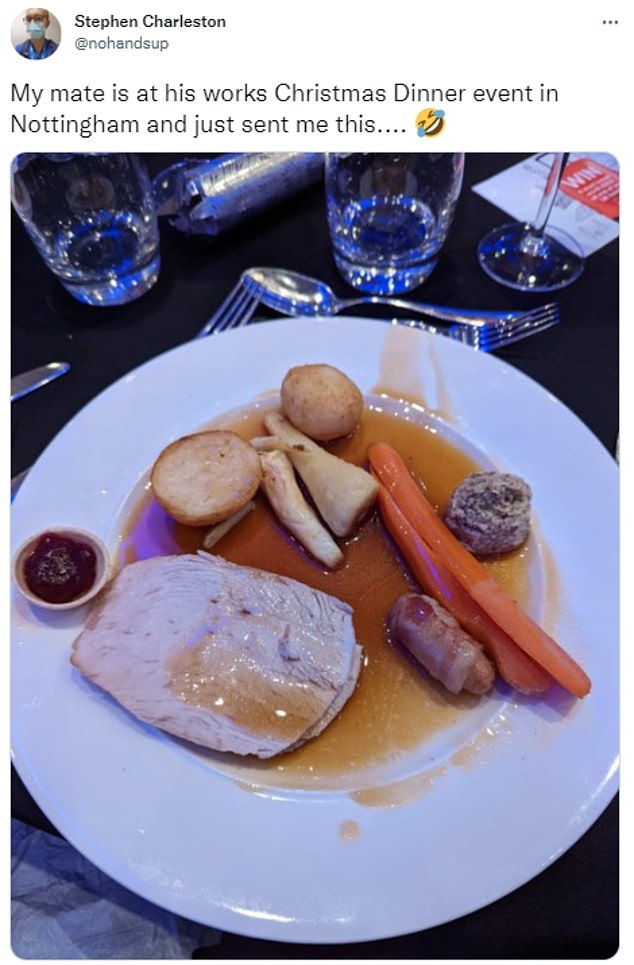 The ‘sad’ looking meal was made up of just two roast potatoes, a measly slither of turkey, one pig in blanket and a few trimmings on the side

The post went viral, with users ridiculing the meal for looking like ‘sadness on a plate’, while others joked it was the epitome of the ‘cost of living’ crisis on a plate

The post went viral, with users ridiculing the meal for looking like ‘sadness on a plate’, while others joked it was the epitome of the ‘cost of living’ crisis on a plate.

One person said: ‘If you could eat sadness it would look like this’ while another posted: ‘I bet that tastes of sadness’.

Others joked that the portion was akin to a starter with one person quipping: ‘Looks ok, what did they get for their mains?’

The post saw other people sharing pictures of their ‘sad’ Christmas lunches.

Twitter users have given their verdict on the Christmas dinner, with many calling it ‘sadness on a plate’

It comes after a survey revealed the most unsavoury acts when it comes to serving up a traditional festive lunch, including people adding baked beans or mash potatoes with their Christmas dinners.

Leaving the giblets in the turkey (50 per cent) and being served lumpy gravy (41 per cent) are also considered crimes, data showed. 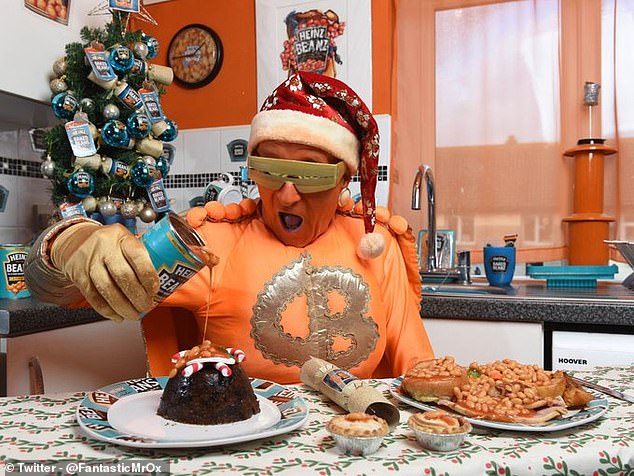 2,000 Britons were asked about the most unsavoury acts when it comes to serving up a traditional festive lunch, with baked beans being the biggest Christmas crime 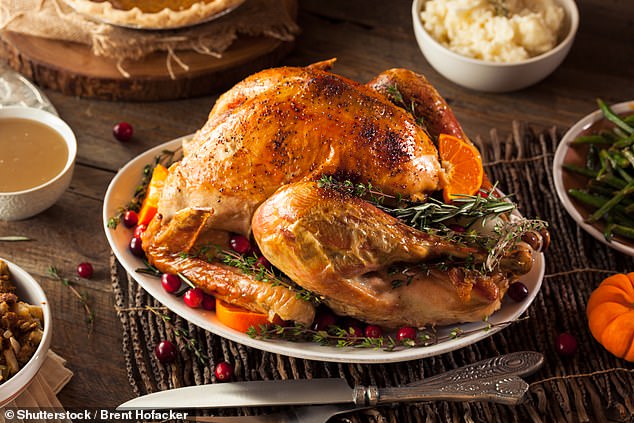 An undercooked turkey came in second place, with 59 per cent of people saying they were outraged when seeing it

As is serving a side of chips (45 per cent), sweetcorn (34 per cent) or a Yorkshire pudding (13 per cent), according to those polled.

One in ten (11 per cent) believe serving mashed potatoes is wrong, while 14 per cent said using a packet bread sauce is a crime, when you can make it yourself.

Packets of frozen roast potatoes (19 per cent), mushy sprouts (35 per cent) and hot sauce (38 per cent) also made the list of items which should never grace the Christmas lunch plate, according to the survey by Thermapen.

Overall, the average Brit will consume three full festive lunches over the month of December.

The survey also revealed some of the bizarre things some Brits confess to adding to their Christmas lunch, with 14 per cent having added a side of mac and cheese and 18 per cent saying they have whipped up some potato croquettes to go on the side.

Mayonnaise (13 per cent), hash browns (11 per cent) pickled onions (7 per cent) a fried egg (7 per cent) and even curry sauce (5 per cent) emerged as some of the weird and wonderful additions.

The survey comes after it was revealed by researchers earlier this week that the price of a Christmas dinner has gone up three times quicker than pay. 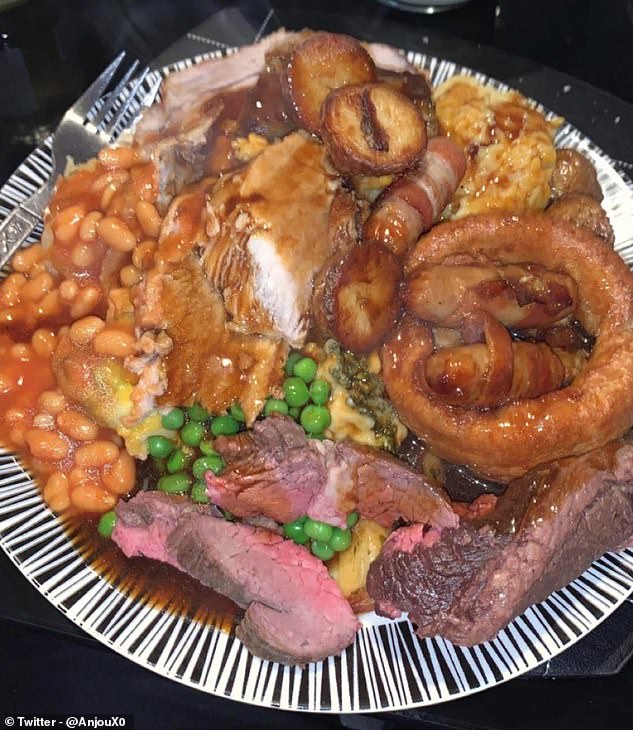 Overall, 66 per cent profess to having been disgusted to witness someone adding baked beans to their Christmas dinner plate, according to a survey