Italian anti-terrorism police on Wednesday arrested a Lebanese man suspected of planning a poison attack in the name of the Islamic State jihadist group.

The suspect Alhaj Ahmad Amin, who has Palestinian roots, was apprehended for links to international terrorism and is accused of ‘having joined the terrorist, Islamic pseudo-state, IS,’ anti-mafia and terrorism chief Federico Cafiero de Raho told reporters.

After an IS member was arrested in Lebanon in September for plotting to poison the drinking water of the Lebanese army, it emerged he had a cousin in Italy who ‘had the idea to carry out a similar operation in Europe’, police said. 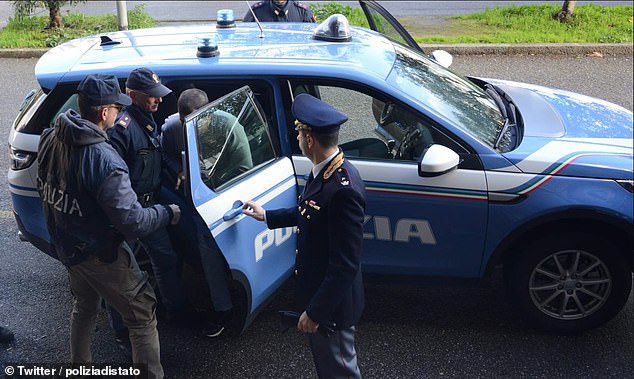 A 38-year-old man was arrested in Macomer for allegedly planning an attack in a locality of Sardinia. The arrest was conducted by the Nuoro Digos

Italian authorities were alerted by Interpol, who learned of the threat from Lebanese authorities when Amin’s cousin, 27, was arrested.

Officials then arrested the 38-year-old in Macomer.

Amin had been planning to put ricin or anthrax in the water supply in the central Sardinian town of Macomer as well as a nearby military base, de Raho said.

It emerged that he had wanted to carry out the attack on an Italian public holiday.

Numerous references to IS and the use of poison had been found on the man’s smartphone.

The streets around the centre of Macomer were blocked off and police dogs were present to prevent the suspect from getting away, according to local media reports.

He was clapped in handcuffs as he came out of his house and got into his van.

Police confirmed that Amin has an Italian residency visa, having arrived from a refugee camp in Lebanon several years ago.

He lived in Macomer with his partner, who denies knowledge of the poisoning plot, and her four children.