Islamic State (ISIS) saw its last stronghold in Syria fall last weekend after the US-backed Syrian Democratic Forces (SDF) entered the town of Baghouz after weeks of bruising battle. Former British soldier and security expert Hamish De Brett Gordon, however, warned the British Government that, while the military struggle with ISIS had ended, “the job is not done.” Speaking to talkRADIO, Mr De Brett Gordon said: “I think to all intents and purposes, the so-called Islamic State – the caliphate – militarily have been defeated.

“As the Syrian-Kurd forces have said and has been agreed by the UK and US Governments, there are still small pockets in Syria that need to be wiped out.

“We understand a lot of paperwork and detail has been found in Northeast Syria detailing a call to its disciples to attack targets in the West which I think is why President Trump has said we must remain vigilant. On the websites that these jihadists communicate with, again they are calling to them now to take their fight onto the streets of Western countries.

“While there is a time for celebration, sadly the job is not over.”

Though the defeat of ISIS at Baghouz ends the group’s grip over the jihadist quasi-state straddling Syria and Iraq that it declared in 2014, it remains a threat. 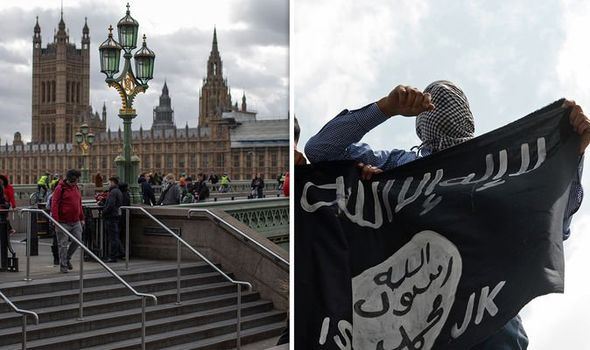 Mr De Brett Gordon continued: “I have grave concerns that we have cut the head off the snake and invested huge capital in destroying Islamic State militarily, but unless we start getting involved particularly in a humanitarian aspect then they could regrow.

“The four million civilians there are starving, they have no medical supplies, and the only people they can turn to for support are al Qaeda and the IS terrorists on the ground who are offering them something.”

In Iraq, ISIS slaughtered thousands of Yazidis in Sinjar, forcing more than 7,000 women and girls into sexual slavery, while in Syria, it massacred hundreds of members of the Sheitaat tribe and beheaded Western hostages in horrifying footage uploaded to the internet.

Since suffering devastating territorial losses in 2017, ISIS has steadily turned again to such tactics. Sleeper cells in Iraq have staged a scatter-gun campaign of kidnappings and killings to undermine the Baghdad government.

The group has also carried out many bombings in northeast Syria, including one which killed four Americans in January, shortly after US Vice President Mike Pence had proclaimed ISIS’s defeat in the area.

ISIS took large swathes of Iraq and Syria from 2014, imposing a reign of terror with public beheadings and attacks by supporters abroad – but it was eventually beaten back to the ramshackle town of Baghouz.

Around 60,000 people have poured out Baghouz over the last two months with intense air strikes obliterating entire districts.

Civilians made up more than half the people leaving the town including women from the Iraqi Yazidi sect whom the jihadists sexually enslaved.

Thousands of the group’s diehard supporters, including many foreign women who married jihadists, also abandoned the enclave.

In the end, they were holed up in a tiny enclave from which they released a video showing fighters still shooting with smoke billowing above – an attempt to portray their last stand as heroic and a call to arms for future jihadists.