Israel says an MSF nurse SHOT at its troops on the Gaza border and slams the charity as ‘Terrorism Without Borders’, as aid group launches investigation into employee’s death

Israeli forces shot and killed a Palestinian nurse working for Doctors Without Borders (MSF) after the man opened fire on troops at the Gaza border, and allegedly also threw a grenade.

The medical charity has confirmed that Hani Al-Majdalawi was one of its employees and said it is investigating his death, as Israel slammed MSF as ‘Terrorism Without Borders’.

Al-Majdalawi’s family has since taken to social media to call the 28-year-old a ‘martyr’ and said he ‘bought the weapon with his own money’.

‘Doctors Without Borders (MSF) confirms that one of its employees, Hani Mohammed Almajdalawi, was killed in Gaza on Monday, August 20, 2018,’ the organisation said in a statement.

‘MSF is working to verify and understand the circumstances regarding this extremely serious incident, and is not able to comment further at this stage,’ it added.

‘Hani al-Almajdalawi, who tried to infiltrate through the security fence in the northern Gaza Strip while he was armed with a rifle, opened fire toward military forces and even threw an explosive device at them,’ it said.

COGAT said Almajdalawi was ‘a nurse who worked for the international organisation Doctors Without Borders.’ 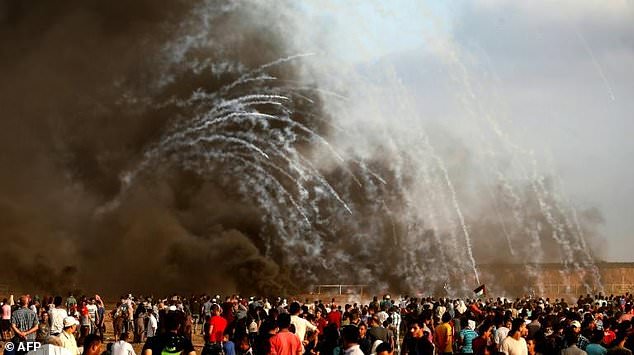 Palestinian protesters gather along the border between Israel and the Gaza Strip on August 3, 2018

Responding to Israeli media reports on al-Majdalawi’s killing, his brother, Osama, described the married 28-year-old on Facebook as a ‘martyr’ who had ‘bought the weapon with his own money’ and acted ‘completely independently’.

The Facebook post confirmed that he had worked for Doctors Without Borders and added that he had been ‘the most socially, psychologically and economically stable among his brothers’.

MSF has around 200 local and foreign staff in Gaza and in May the charity condemned Israel’s use of force in border protests as ‘unacceptable and inhuman’.

It described the army’s policy as ‘shooting with live ammunition at demonstrators, on the assumption that anyone approaching the separation fence is a legitimate target.’

At least 172 Palestinians have been killed by Israeli fire on the Gaza border in mass protests which began on March 30.

One Israeli soldier was shot dead by a Palestinian sniper in July.

Israel maintains that its use of force is necessary to defend the border and stop infiltrations and attacks.

Israeli authorities did not immediately respond to requests on Friday to confirm Almajdalawi’s death and detail where his body was being held.

The Israeli military on Monday released a terse statement on a border gunfight which did not name Almajdalawi or confirm that he has been killed.

‘A terrorist shot at IDF troops in the northern Gaza Strip, in response IDF troops shot towards the terrorist,’ the army said, referring to the Israel Defence Forces.

It said that no soldiers were wounded but made no mention of any Palestinian casualties.

The border incident occurred despite attempts by Egypt and UN officials to reach a long-term truce between Israel and Hamas, the Islamist movement that runs the Gaza Strip.